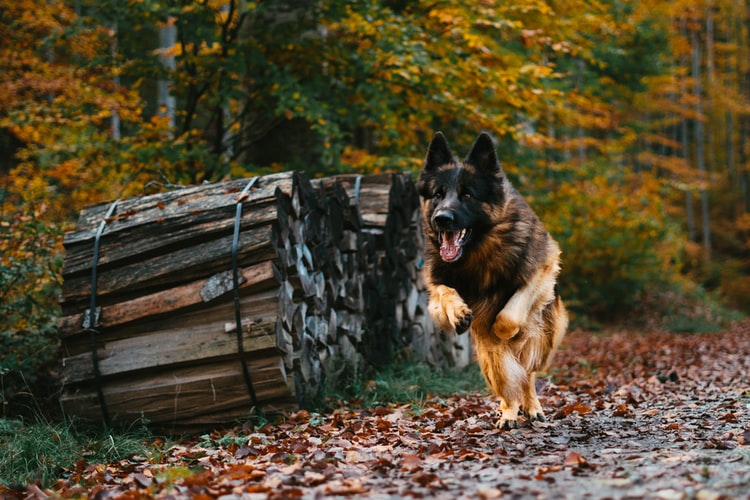 German Shepherd dogs are counted among the top breed that are smartest by behavior. Hailed from Germany, they are quick learners and rank high in canine royalty. Their appearance is more or less similar to a wolf. Earlier German Shepherds were called as herding dogs. Since their prime job was to herd sheep. But as time passes by, they evolve as one of an ineluctable breed. According to American Kennel Club, German Shepherd is the second-most registered breed.

German Shepherds are quite active dogs and easy to train. They are huge and speedy.  An adult German Shepherd weighs approximately 90 pounds and has a height of more than two feet. Compared to different families of dogs, the German Shepherd has an estimated life expectancy between seven to ten years. From the tops of their pointing heads to their thick bushy tails, they are noble creatures. Their eyes are almond-shaped and have large and sharp muzzles.

No doubt German Shepherds possess spectacular traits. But they also hold innumerable decent skills. We’ve curated a list of five common but powerful skills and traits. Here these are:

The German Shepherd is a very intelligent breed and their intelligence can be harnessed by training them. They need mental stimulation regularly. They are quick learner as they are being trained. Early social interaction and puppy training programs are important, and completing behavioral training can further ensure that they develop into a resilient and well-mannered dog. The German Shepherd is rather a knowledgeable companion and an exceptional dog. Consistency and constructive reward-based preparation can yield outstanding outcomes.

READ :   Can Dogs Eat Oatmeal With Brown Sugar And Cinnamon? – Is This Power-Packed Carbohydrate Meal Good For Your Dog?

One of the major qualities of German Shepherds is their guarding ability.  They are highly knowledgeable and understand commands very easily, it makes them a favored breed of the police dog.

They are quick to respond to the warning signals.They are widely used for military and police services because of their loyal and courageous nature. The German Shepherds are great at listening, learning, and obeying. They are amazing both in their appearance and nature, they have instincts to respond to the orders at any time of notice.

As they are highly sensitive, they are being trained and used for different tasks. One such important task is to detect drugs. Whether it be a workplace, tunnels, air-crafts, etc., the drug dog sends the final level of warning regarding the identified drug by any method they have been taught to warn the trainer.

The German Shepherds are known as high-energy dogs and hold the potential to spend all their days outside. Due to their glands, they can smell 250 times   stronger than a normal human.Thereby, facilitating the proper work environment for Police or Military services.

The reason why German Shepherd dogs are quite renowned lies in the fact they are highly adaptable. They can easily adapt to any sort of lifestyle and living condition. Homes with a wide yard are suitable for German Shepherds, but they can quickly adjust to any living apartments as long as they are having ample exercise.

READ :   German Shepherd Tail Problems: What Is The Tail-telling You?

The German Shepherds are loyal – they are alpha dogs. The standard German Shepherd personality expresses itself as an aversion to outsiders coupled with the deep maternal instinct of their kin. Well-built, Powerful, and Energetic German Shepherds are a perfect breed. They’re courageous and solid, with all the characteristics of a great working dog. Generally, they excel, physically, and mentally owing to their outstanding temperament. Being helpful and friendly to their masters is a hallmark of German Shepherd. They would become rather affectionate with their owners. The profound sense of loyalty and protection render the German Shepherds a fine protective dog. Nevertheless, adequate socialization and learning are required so that they do not become overly protective.

German Shepherds are astounding and well-muscled dogs in their work. It requires a lot of time, commitment, and knowledge to train them for their respective purpose.

The German Shepherds are often socially responsive and very polite. They can interact well with other dogs and socialize easily. They are really smart and love playing games, so obedience training would be typically simple and effective. They are great with children and that is what makes them perfect dogs for the home. They are safe, devoted family dogs that you should get if you are considering the same. They would light up your home with their existence because that’s how wonderful they are!