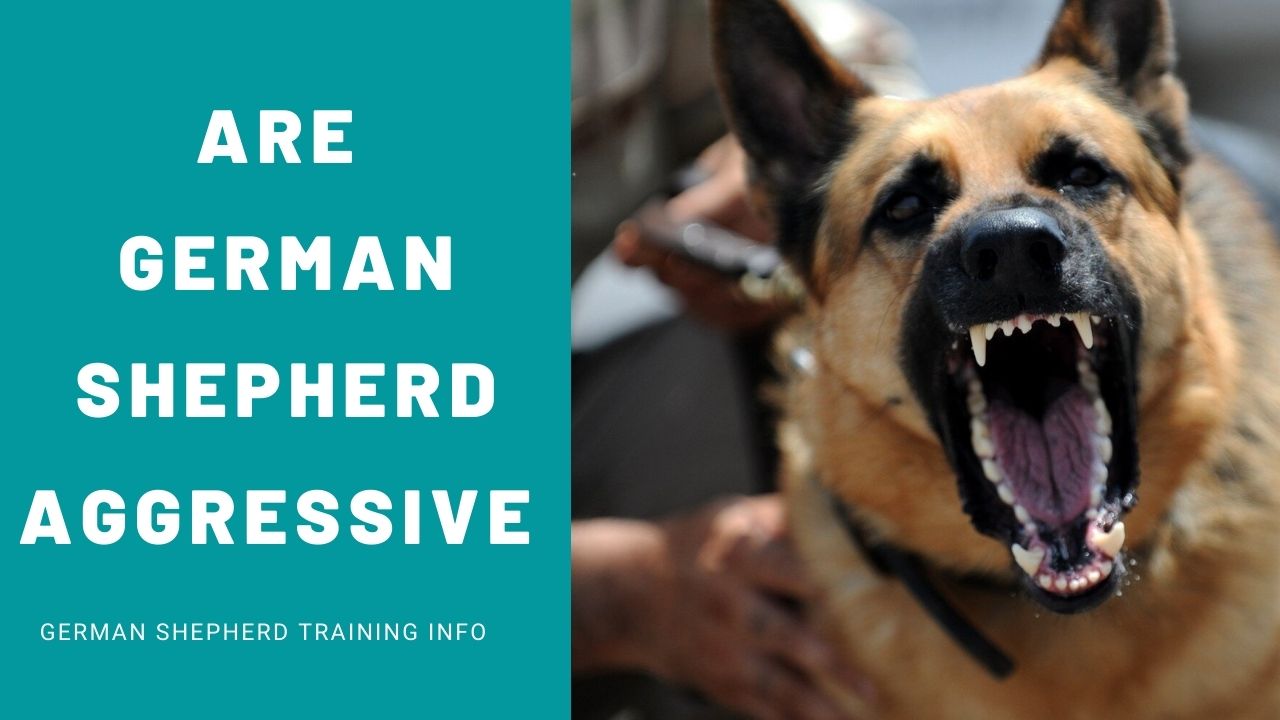 German Shepherds are one of the most popular domesticated dog breeds owned by many all around the world. Like most dogs, they can be very, adorable, friendly, and intelligent. They are also termed as one of the best guard dogs. As German Shepherds are medium to large-sized breeds, coupled with their watchdog instincts, so it is quite imaginable what damage they can cause if they have gone rogue.

German Shepherds are often being linked with bad temperaments or aggressive tendencies. The reason for this can partially be understood by its origin itself. In the year 1899, a dog named Horand von Grafrathwas first declared as a German Shepherd Dog by Max von Stephanitz who later found the Society for the German Shepherd Dog. Later this particular breed was rapidly bred for natural qualities such as intelligence, strength, and speed. These qualities were also the perfect requirements for German Shepherds to become active guard dogs. GSDs were bred initially, with the motive to serve as guard dogs in the community rather than companion dogs. Thus, being a guard dog for generations, aggression comes naturally to them.

According to a study made by the American Animal Hospital Association (AAHA) concludes that GSD is an aggressive breed in case of biting frequency if not trained properly. So, it is very essential to properly train a GSD, so they can manage their skills to prosper and not end up creating chaos. Over the last few decades, GSD has gained a bad/poor reputation for being one the most aggressive dogs and quite often poorly portrayed by media and news channels. But, apart from aggression, they are extremely loyal and loveable dogs to have around.

It would be highly insensitive and ignorant if we flat out stated, ‘GSDs are aggressive’ without considering its characteristics, personality traits, and the effort required to keep them well disciplined. The German shepherd is a large and interesting breed. They are a combination of power, confidence, and intelligence which makes them incredibly interesting and if not trained properly can turn out to be harmful to humans, as well.

Some of the most striking features of a GSD is that they are very protective towards their family and are always on high alert. Besides these, they are naturally loyal, fierce, and extremely brave. They possess an alpha trait that naturally makes them dominant, and coupled with the protective trait they pounce or bite on a stranger by sensing them as a potential threat to the family, one of the most important reasons contributing to the generalized idea of considering German Shepherd dogs as aggressive.

Types of aggression seen in a German Shepherd

Aggression is a psychological issue, which may have several underlying causes. Types of aggression that are commonly observed in a GSD.

●        Protective aggression: As stated earlier GSD are very protective towards their family. Because of their alpha trait, they treat their family as a pack, and whenever they feel that part of his is under a potential threat they act quick and swift.

●        Fearful aggression: This type of aggression arises out of fear. Generally, a fearful GSD will retreat to a corner and feel aggression in the only way out.

●        Defensive Aggression: This might be similar to fearful aggression but instead of retreat a GSD tries to defend himself and attacks

●        Possessive Aggression: This type of aggression is generally associated with foods. Primitive dogs had to search for their own food and had to protect it from other potential predators, this nature is still predominant in most modern dogs.

●        Frustrated Aggression: A dog is nothing but a child and when they are held back from a thing or person of interest they lash out. This type of behavior is quite frequent in GSD.

●        Territorial aggression: This type of aggression is due to another primitive nature of protecting the territory. This is most likely to the home they live in and the space surrounds it.

●        Predatory Aggression: This is another primitive trait. A GSD will chase something aggressively if they think it’s prey that is getting away.

Symptoms of aggression in German Shepherd?

Aggressive behavior cannot be described by a single word or expression, It’s a combination of various expressions under various circumstances. Some of the very common symptoms are as follows

●        Your GSD continues to bark and growl at you even after saying “NO” and started to bark even louder.

●        Your GSD snaps back at you if you try to refrain him from something he’s doing.

If you do notice some of the above-mentioned signs frequently it’s time to address it.

What triggers the aggression in your GSD?.

Behind such behavior, there is a possibility of an underlying issue. It is necessary to know the source of behavior in order to control it. There are a lot of reasons that causing such behavior. So, first, let’s have a look at some of the triggers

●        Lack of proper training: A GSD is extremely smart and intelligent. That is the reason they are often used as police dogs. Moreover, they can be trained very well because of their high level of intelligence. Moreover, good training is extremely important for this magnificent creature to socialize properly. Lack of proper training makes them aggressive and arrogant.

●        Lack of exercise: As they are guard dogs so they need to remain very active. An adult healthy German shepherd requires at least 2 hours of exercise. It can be a combination of various activities like, walking, running, and playing. But when they don’t get it adequately they channelize the energy somewhere else and thus show signs of aggression. Lack of exercise impact their attention span and makes them restless which results in aggression.

●        They are bored: GSD tends to get bored easily if they don’t get enough attention, Your GSD is just like a human child. They are very loyal and emotionally attach themselves easily to the family, in return they expect attention and interaction. Whenever they don’t get the desired attention they get bored and express the boredom through different aggressive behaviors.

●        They are overprotective: As stated earlier that a GSD feels extremely protective towards his family and any unfamiliar face or animal near any of your family members becomes a potential threat to them and they continue to bark or snarl aggressively.

●        They are being dominated: GSD is free-spirited and possesses alpha instinct. They love to live in the packs and their sole responsibility is to protect the pack. They are naturally indomitable but trainable. So if you try to dominate them instead of there might be high chances that they will turn on you. They are very loveable and loyal, so don’t try to be his master rather try to be a leader to train him properly.

A GSD is a dog one can surely fall for. But sometimes it has been reported by people that a male GSD is showing more aggressive behavior than a female. To know the reason we need to take a look at their individual personality as male or female.

Male GSD is larger in size than their female counterparts. They are more muscular and powerful. They tend to be more possessive as they grow up and are more dominant as well as territorial. That’s why most of the police dogs are happened to be male.

Whereas a Female GSD is generally more friendly towards children and other dogs, and they are excellent in training. They are very good at socializing with others.

Due to these striking differences in characteristics, male GSD is often considered to be a little more aggressive than female, so you need to set your purpose right before adopting any gender.

How to control the aggression of GSD?

Once you know the reason behind the behavior it will be much easier for you to control the situation.

●        Train them properly: It is the first thing you can do to help your GSD to overcome aggression. Their smartness is an added advantage along with the high level of intelligence. They can be easily trained to adopt healthy behavior

●        Help him to socialize with other humans and dogs: Dogs love socialization and  they love to stay in the pack since the primitive ages. Modern urban lifestyle prevents them from socializing with other animals and humans, which affects adversely their psychology and leads them to behave aggressively. So it is important to help them socialize with other breeds and animals or even with humans. Take them on a walk to the nearby park every day and spend some good quality time socializing.

●        Consult a Vet:. A vet can check for any underlying health issues that might be causing the behavior and prescribe certain medications to eliminate the root cause

Do’s and Don’ts to control aggression

The German shepherd is one of the smartest and loyal dog breeds. Their protective and dominant instinct makes them a potential guard dog and exceptional work dog. Whereas they are bred to protect you and your family which makes them naturally aggressive than other breeds under certain circumstances.

The good news is they are excellent in training and it’s easy to teach them healthy habits and behaviors. Most of the time the underlying cause of the aggression is lack of activeness or they are being bored. So before adopting this wonderful breed you need to set your purpose and desire in proper alignment. A GSD needs lots of attention as they are very active and playful, lack of these will lead them to become aggressive. Moreover, it’s important to understand the root cause behind every behavior which needs dedication and patience.  Once you find out the cause it’s easier for you to make your GSD feel secure and well adjusted to your family.