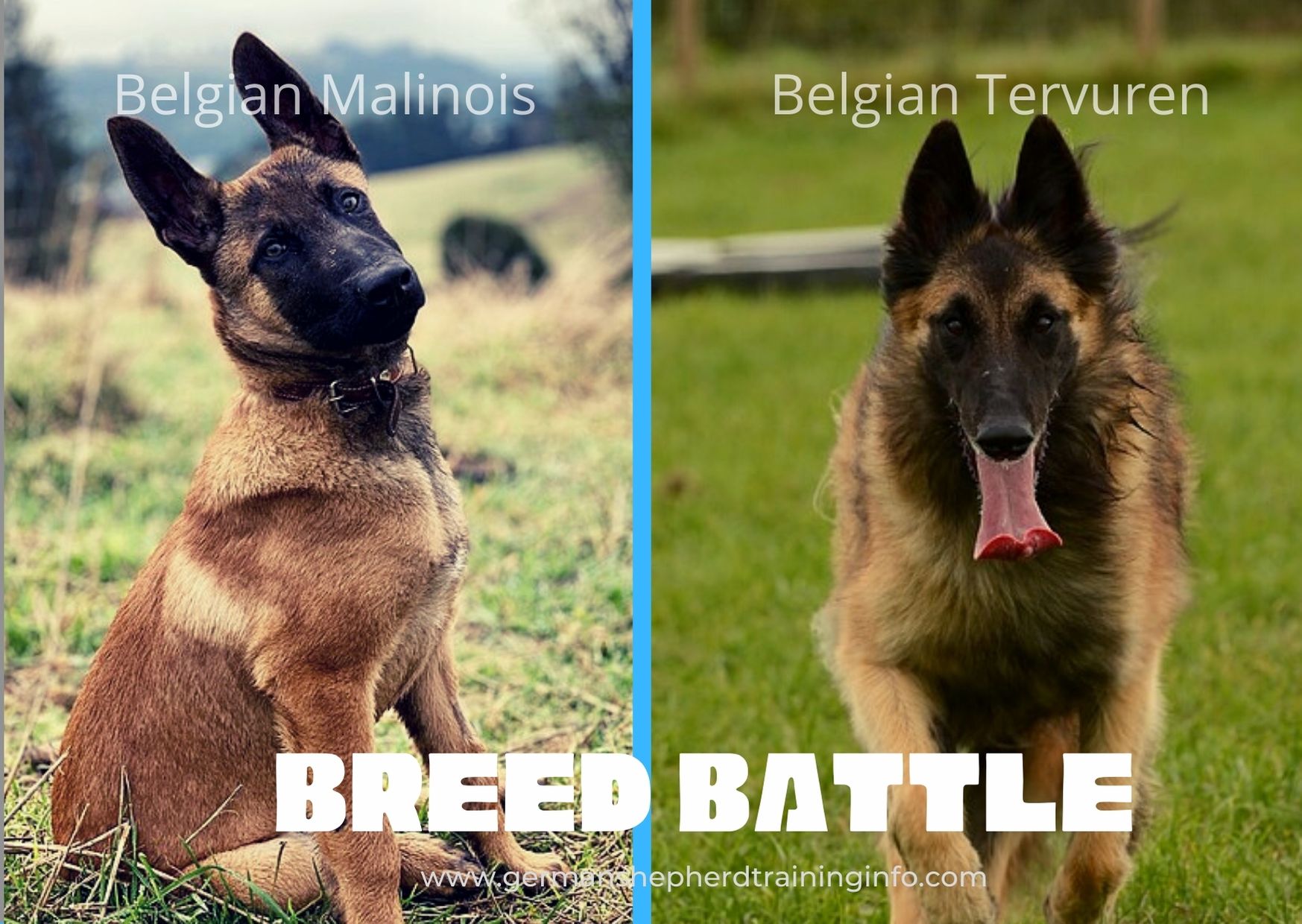 If you are someone who takes an active interest in dog breeds, you are sure to have noticed the Belgian Shepherd dogs that can often be spotted as police dogs. Belgian Shepherds are active, intelligent and loyal in nature.

The Malinois and the Tervuren are big dogs. They are friendly, yet they can be vicious, depending on the situation. There are various similarities between the two breeds, given the fact that they have similar origin. However, there are some distinct and important dissimilarities between them as well, which is important and relevant if you are looking for the correct breed to  adopt.

If you are looking for an in-depth comparison between Belgian Malinois and the Belgian Tervuren, you have landed up in the right place. We have referred to various sources and brought to you, a piece with the differences and similarities between the two which will help you to have a clear image of the two varieties.

The Belgian Malinois like all the other Belgian shepherds was bred to be herd dogs. The Malinois is rather a famous breed, one that has been actively discussed and talked about, especially due to the linkage of it to a very important political event.

Cairo, the dog who was instrumental in the capture of Osama Bin Laden in the year 2011, was a Belgian Malinois. This incident, a remarkable one in history, is proof of the various qualities and capabilities of the Belgian Malinois as a breed.

Given the fact that a Belgian Malinois is bigger in size and heavier in terms of weight, they do not adapt well to a crammed up space. The Belgian Malinois requires a living space which is big enough for it to move around freely and be their own self. This is the reason why you should think twice before adopting a Malinois if you have an apartment that does not have enough space.

READ :   Everything you need to know about Golden German Shepherd - 'THE GOLDEN SHEPHERD'

The Belgian Malinois is friendly in nature and is extremely intelligent. They are easy to train because of these factors. Personality-wise, a Malinois is both proud and affectionate. This makes them adapt to a home environment easily. They like to be a part of a family and are good with human babies as well. On the other hand, they might face issues in adapting to a different dog or a pet in the family setting.

Being a big and active dog, a Malinois requires high-quality dog food. Treats can also be given during training but it is important to keep a track of them because it can make them obese. You can check with your vet to find out which human food will be suitable for your dog. Some of the common foods that dogs can consume are fish and eggs.

The Belgian Malinois is active in nature and exercise is of extreme importance for this breed. Simple walks around the block are not enough. Because of their fun nature, it is recommended that the dog be engaged in physical activities which also stimulates their mental activity. A Belgian Malinois is a great companion to the owner for hiking, biking and running.

Being a herding dog, they are good at both physical and mental activities. The Belgian Tervuren was named after a village, Tervuren, where they were developed. During the Great Depression, they almost died out and were then recreated during the Second World War.

Although the Belgian Tervuren is big in size, in comparison to the other Belgian Shepherds, they are of medium size. The Belgian Tervuren does not adapt well to small living spaces. If you reside in an apartment, it will be almost impossible for a Tervuren to be your pet. One should always keep this in mind.

Space is important for a lot of things. The bigger the size of your dog, the more space they will require. Apart from indoor space, big dogs also require a significant outdoor space which can be in the form of a lawn or backyard. This is essential for the overall, physical, mental and behavioral development of the dog.

The Belgian Tervuren is sensitive in nature and cannot tolerate being left alone. If you work for the most part of the day, a Tervuren might not align with you. They love to reside in a family situation and are friendly to kids and other pets although they might need some time to get used to the cohabitation scene. They adapt better to cold weather than heat which is because of the thick coat that they have.

READ :   King Shepherd Vs Shiloh Shepherd: The battle of the descendant breeds

The Belgian Tervuren needs an active owner. They need to exercise daily. Such exercises should not be limited to physical ones but should be extended to suit the mental development of the dog as well. They also need to be brushed and combed twice a week. The frequency of the brushing needs to be increased when they shed. Tervuren is healthy dogs and with regular exercise, they stay healthy. However certain issues have been spotted in this breed for which they should be regularly taken to tests such as Thyroid evaluation, Hip evaluation and Elbow evaluation.

Such an intelligent and beautiful breed needs the owner’s utmost attention, especially regarding food. The Belgian Tervuren needs to have four meals a day during the phase of growth. Later on, the meals can be cut down to thrice daily but it is important to make sure that they receive a balanced diet consisting of protein, fats and carbohydrates. Generally, this breed has a substantial appetite, however, that might decrease after vaccination.

The Belgian Malinois and the Belgian Tervuren essentially originate from the same breed. There are various similarities between these two breeds which is the result of their origin.

Because of the fact that both of these breeds like being active and are playful, their food requirements are the same. During their period of growth, a four meal per day plan works the best. However, they are prone to obesity if they don’t get involved in physical activities. Both the breeds are intelligent and proud. For them, physical exercises such as walking or running aren’t enough. They need to be engaged in activities that are both good for their body and mind.

Another important similarity is the fact that they both need enough space to live in. Space is important for the flow of the massive amount of energy that they accumulate. Both the Malinois and the Tervuren adapt well to family and other groups such as the Police Force. They are both affectionate and possessive of their family.

Although the Belgian Malinois and the Belgian Tervuren might seem to be completely similar to each other, it is not the case. There are certain differences between the two breeds which are important to know before you make a decision of adopting.

The first and foremost difference is the fact that the Belgian Malinois is more tolerant to heat than the Belgian Tervuren. This is because of the fact that the Tervuren has a thick and double coat while the Malinois has a straight coat which is also resistant to weather. Because of this difference, the temperature around the Belgan Tervuren needs to be kept at check unlike the Malinois.

READ :   Can Dogs Eat Apple Sauce With Cinnamon? Is there a Green signal for the red?

In terms of personality and adaptability with owners and humans, there are small but important differences. While the Belgian Malinois is active in nature, the Tervuren is not. This is the reason, Malinois is the first choice when it comes to recruitment into the defence units. The Tervuren is a family dog. They love to be a part of a family, are affectionate and loyal to the members and are very protective of them.

Although the Malinois is also a family-friendly dog, it is much more independent in nature. Due to this personality trait, they might not be as affectionate as the Tervuren. However, the major difference between the two breeds is the tendency to roam. While the Malinois is well-known for its urge to be a wanderer, the Belgian Tervuren has very little wish to be one. This is the reason why a Malinois can escape from the house whereas a Tervuren has less chance of pulling off such a thing.

Every dog has a personality of their own. Each dog is different in nature and personalities can differ a lot and with time, age and other factors. Although we have provided the basic characteristics and traits, it might not be the case in every Malinois and Tervuren that you come across.

However, it is important to understand the fact that both of these breeds are big, intelligent, active and always looking for an adventure. They need a lot of care. Their nutrition needs are of utmost importance and they need to be trained in mental capabilities as well. None of these breeds should be left alone and you will need to dedicate a substantial amount of your time to them on a daily basis. Taking in a Malinois or a Tervuren will be a task and if you can’t live up to their expectations, it is possible that they will develop behavioral issues that can often go out of hand.

All in all, both the breeds are wonderful companions and can be a pleasant member of the family. Although there are differences in certain personality traits, they are herding dogs and are quite similar.

Dogs are man’s best friend. Having a dog in the family is a rewarding experience. Dogs can fill the house with positive energy with their vibrant personalities and cheerful nature. They are good companions for kids as well. Belgian Shepherd dogs might be high maintenance in nature, but living with them is a lovely experience. They make you feel protected, loved and also keep your waistline in check by getting you involved in their daily exercise sessions.