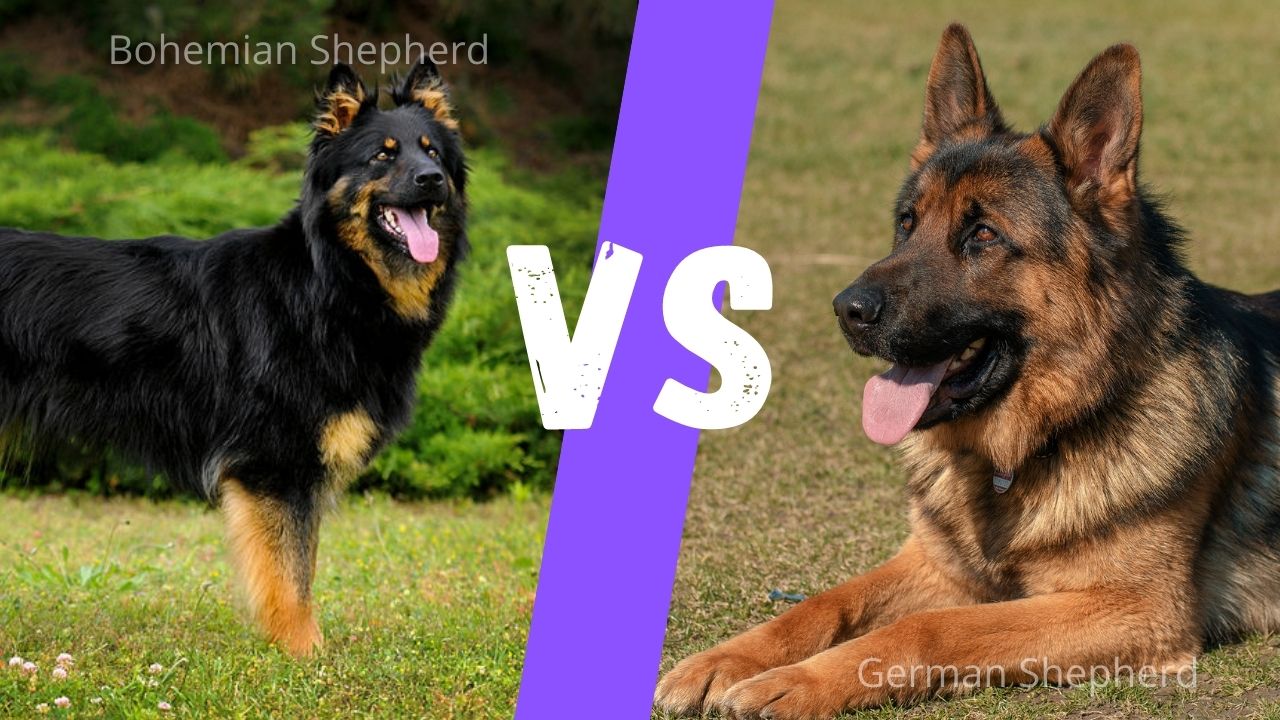 Hello Readers! We bring you here a breed battle series, where we will compare and contrast German Shepherd with other similar dog species. Our aim is to provide you a clearer overview of breed qualities so that you know what you have signed for when you pick two dogs that may look similar in appearance. So, let’s start with Bohemian Shepherd vs German Shepherd, the two most enticing breeds known for their loyalty, agility, and dutiful nature.

Bohemian Shepherd’s origin records date back to the 1300s. This dog is a Czech breed and was recognized as a herding dog due to its penchant for wild surroundings. However, sooner people realized the loyal and eager-to-serve nature of these dogs and started rearing these for using them as task dogs. With the introduction of organized breeding programs, this species became more city-friendly and turned out to be a common pet option.

German Shepherds are a bit younger species than Bohemian and their development started somewhere near the late 1800s. The British name of this dog is Alsatian. These dogs became more popular as military dogs and got an entry into the US from the UK after the military retreat that followed World War I. Often used as guard dogs or service dogs, the German Shepherd is very stylish in appearance as their body is quite proportionately built.

Bohemian and German Shepherd dogs are medium to big size puppy breeds. Their confident and poised stature makes them look quite royal in appearance. It is their intimidating looks that won them the title of guard dogs. Originally recognized as herding dogs, these breeds became popular among humans due to their love for serving people and extreme loyalty.

Bohemian Shepherds need a constant dose of activity to remain calm. They are not the ones to sit quietly, if left alone or idle, they tend to become disturbing. These pets are not meant for first-timers, but if you are patient, and have a lot of time in hand to spend it with them, you can do well as first-time dog parent to Bohemian Shepherd. This breed is open to training and lots of games, but need a lot of motivation to keep on trying to learn. So, you may need a dog attendant or spend time with them amply to drain them out if you require going out to work. With good amount of energy spent in walks and morning training sessions, these pets spend time sleeping or resting when you are away.

German Shepherds are equally agile and active as Bohemian Shepherds. They also enjoy games and training, and are quick learners. These pets can be well-maintained if you have included lots of activities and games in their daily routine. They are hardly irritated or aroused, but can show attacking behavior around strangers. So, these do require obedience training to settle in the city life.

Generally, both the Bohemian and German Shepherd are healthy dogs. Still, you have to pay attention to their being prone to allergies. Food allergies are the most common type that both breeds exhibit. Other common health disorders both breeds may suffer from are hip dysplasia, elbow dysplasia, bloat. Mostly, these are due to irregular growth patterns of the bones and joints, which commonly happen in medium to large size puppy breeds. Eye and ear infections are more common in Bohemian Shepherds than German Shepherd dogs.

2,3,4 months and then yearly: A combo vaccine (DHPP and leptospirosis)

If the puppy of Bohemian Shepherd breed is adopted or bought after the age of 4 months, then combo vaccination is to be done weekly and then yearly.

Both German Shepherd and Bohemian Shepherd require protein-rich foods. About 22% of their daily nutrition must comprise animal-based proteins derived from organ meat, beef, liver, etc. Fat content should be between 10-12%. GSD puppies need and consume more food than adults. Pups need to be fed twice while giving food once in 24 hours to adult GSD is fine or you may divide the feeding into two small meals a day.

Bohemian Shepherd, at 3-6 months of age, is to be fed thrice. The frequency is reduced to once between 6-12 months. On attaining one year of age, the feeding is done just like you do for a GSD.

The apartment-friendliness of German Shepherds and Bohemian Shepherds can be derived from their companionship and training needs. Though they are big dogs, but their behavior or tendency to stay close to their human all the time make them a good fit for small spaces too.