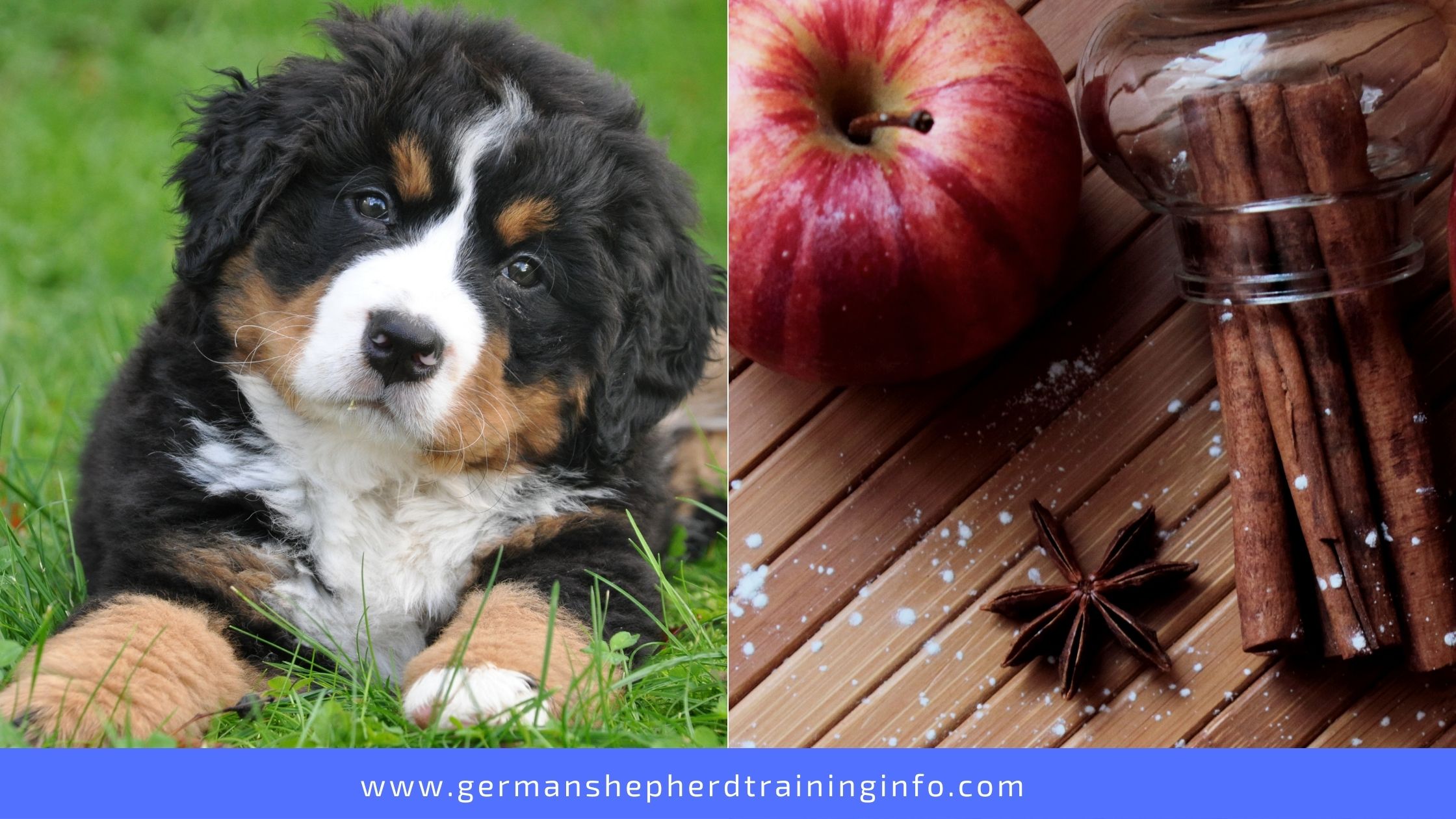 Yes, your dog is allowed an apple sauce with the cinnamon treat. But there is a follow-up list of dos and don’ts that needs to be followed to ensure that it is indeed a treat and does not end in a dietary mishap.

It is said that an apple a day keeps the doctor away. However, all human rules don’t always apply to the canine body metabolism, and a doctor and a vet might not share the same opinion on a common food item. So while apple sauce with cinnamon might have been shown the green light, there are still dietary rules for the dog’s digestive route that you need to follow.

Here are thus a few precautionary pointers for you to help you treat your dog to a cinnamon apple sauce the right way:

Moderation is the key to all healthy diet plans. Apple sauce is a great way to enrich your dog’s body with the goodness of Vitamin C, K, calcium, and fibers that come with an apple, minus the choking hazard risk of feeding him small, cut-up apple slices.

Apple also contains pectin, which helps lower cholesterol levels. It is an excellent dietary addition if your dog suffers from digestion problems. And Cinnamon adds a touch of exotic flavor to the apple sauce.

Cinnamon, in moderation, is essentially non-toxic and healthy for both humans and dogs.

However, Apple sauce with cinnamon should never be a part of the daily dietary plan for your dog. It should be ideally restricted to twice a week and should not exceed more than five percent of the dog diet on a given day.

2. Stick to our advice

Apple sauce available in markets often contains added sugar and preservatives. Be especially on the lookout for xylitol, an added sugar that can prove particularly toxic to dogs.

It will be wise to remember that dogs are prone to blood sugar-related problems like diabetes and pancreatitis. Xylitol can end up increasing blood insulin in dogs to dangerous levels.

Cinnamon is non-toxic to both humans and dogs in moderation. However, in large quantities, it can cause both skin irritation as well as act as an irritant to the digestive system. Increase the quantity and say hello to both vomiting and diarrhea. It can also lead to lowered blood sugar, as well as heart and liver anomalies.

Thus, it is important that you stick to our advice on the above-mentioned dietary restrictions. Even if your dog pulls its best puppy face to get his favorite apple-cinnamon delight.

Apple sauce can be like dog beer sometimes, the pup has to sometimes reach a certain age before he can have it. This is because puppies have a more sensitive digestive mechanism with respect to certain food items than fully grown dogs.

And some puppies may suffer up from diarrhea after having apple sauce, which can quickly escalate into acute dehydration. Start with a small lick to see if your pup is the kind that doesn’t warm up to apple sauce easily.

If your dog is particularly prone to diabetes, unsweetened apple sauce is your best bet. Organic apple sauce without added preservatives and sugar should be a quick pick for you.

However, it is best to prepare your apple sauce and cinnamon treat at home if you are not sure of the contents of the over-the-counter apple sauce.

All you have to do is take a few organic apples, boil them for 10-15 minutes and then strain and mash the apples. Be sure that you do not add apple seeds or stems to the stew, as they contain traces of cyanide that can be toxic to the dog.

Add just a touch of cinnamon in them and then cool it for a while. However, do not overdo the cinnamon powder, especially in front of your dog. This is because dry powder can induce coughing and sneezing in your dog, which can aggravate severe breathing problems.

And if you are feeling lazy about making your own sauce, remember, it will probably take you as much time as driving to the nearest mall. Plus you will be ensuring that your dog gets a hygienic and healthy reward for being the cute sweet heart that he is.

The best way to serve the apple sauce with cinnamon is to freeze it in the ice tray in the shape of small ice cubes. This way your dog can lick and play with it while devouring the delicacy. This can be especially refreshing on a hot, summer afternoon.

You may also use it as a reward or positive reinforcement while he is undergoing training.

If however, you wish to feed him treat in a sauce form only, do it by allowing it to lick it off your fingers. This way, you can moderate the quantity. Also, this removes the risk of your dog accidentally gulping the spoon along with the apple sauce.

Apple sauce with cinnamon can not be a daily treat, but it sure is a nutrition bonus if given occasionally and in moderation. We hope that ‘to give or not to give, is no longer the question’. And if you are suffering from any other Shakespearean dietary dilemmas, check out if your dog can have cottage cheese. Or if coconut yogurt is a good idea.