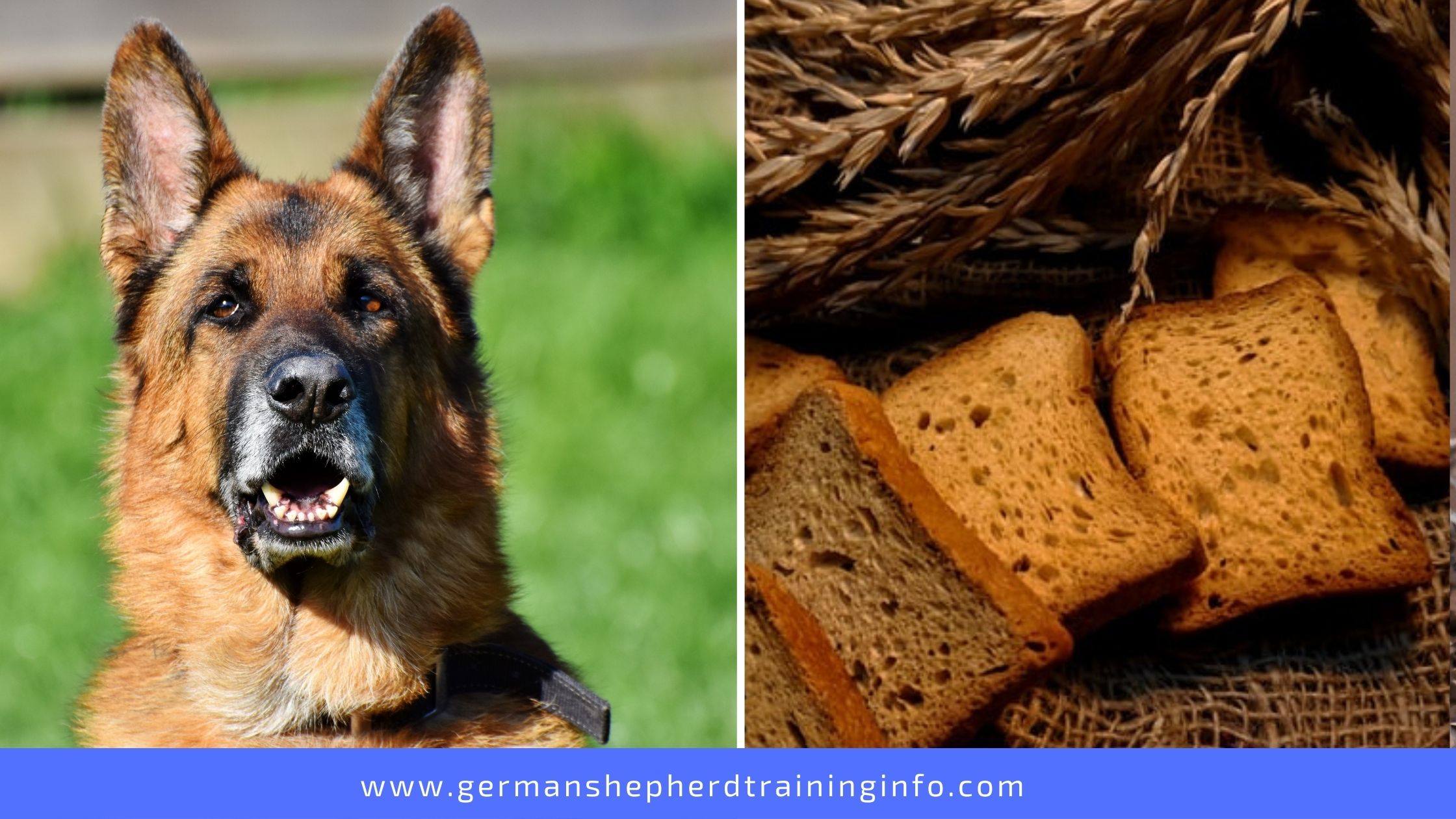 Those of you who are having this amazing four-legged creature must have already seen they just love to munch human foods. The affinity towards human food can be observed throughout the different stages of a pooch’s life. Being a dog parent we all know that a lot of human food is prohibited for your fur baby but we also know that white bread can be given to dogs in a moderation sometimes, but what about the other two healthier versions of bread like multigrain and brown bread?

Certain food products that are considered good for humans may be toxic for dogs. Both Multigrain bread and brown bread are a very healthy option for us humans, as it contains whole grains. It has many benefits as it controls obesity and is even good for diabetics. But to know whether your furball can have them or not we need to have a complete idea of the varied ingredients, then by analyzing further the answer can be concluded.

Whereas Multigrain bread contains some more additional ingredients like

Per 100 g of both bread contains

To know which ingredient is good or which one is toxic for your four-legged love, we need to have complete knowledge of the ingredients and their effect on dogs.

Whole Wheat: This is the main ingredient of many dog foods. It is a good source of energy. Moreover, wheat contains fiber which helps in the growth of healthy bacteria in the intestine, thus helping in bowel movement. So it is beneficial for older dogs as they generally suffer from constipation. But many dogs are intolerant to wheat or show an allergic reaction. In those cases, it is better to avoid any wheat-containing food.

Rice Flour: It is used in many dog treats, it is much lighter and fine than its brown counterpart. But brown rice flour has more health benefits than white one. Your dog can consume it safely if she’s not allergic to it.

Soy Flour: According to a study it is concluded that Soybean products are good for both adult and growing dogs as it is a good source of protein.

Bengal Gram Flour: It is considered to be a healthy source of protein for your dog but should be given in moderation.

Oatmeal: It has rich content of soluble fibre and according to the American kennel club you can feed your dog with 1 tablespoon of cooked oatmeal per 9 g body weight.

Dalia: Dalia is a derivative of wheat even healthier than wheat. So, it is quite safe to feed your dog with Wheat.

Seeds: Multigrain bread contains several seeds some of which are quite beneficial for your paw baby’s health.

Flaxseed: It is a plant source of omega 3 fatty acids and a high source of fiber. It is great for your dog’s coat and fur. It adds natural luster. Besides it also lowers blood pressure and helps to ease our arthritis pain. But it needs to be grounded before feeding.

Watermelon Seeds: Know that dogs love watermelon. It’s juicy and sweet, but what about the seed? Watermelon seeds are not toxic but too much of them can cause blockage to your dog’s stomach. So it’s better to avoid.

Sesame Seed: It is considered to be safe for canine consumption but should be fed in moderation.

Bajra Seed: Millet is high in phosphorus and thus good for your dog’s bone. This is a reason why a lot of dog’s food uses Millet. But again it should be fed in moderation.

Milk Solid: Many pups are intolerant to lactose, So it is important to check before feeding.

Gluten: It is another important ingredient found in wheat. It doesn’t impose any health threat but some dogs are intolerant to gluten. In that case, it is best to avoid. But the good news is more and more gluten-free products are coming out in the market these days so you can opt for that variety.

Yeast: We all know yeast is used in bread dough. But what is the effect of it on your furry friend? Yeast makes the dough rise in a warm and moist atmosphere but unfortunately yo, ur dog’s stomach acts as a perfect breeding ground for yeast. And this causes stomach upset and releases ethanol into your dog’s bloodstream which is fatal. So a dog should never be fed with dough rather than fed with bread.

Malt: Malt has been widely used in many pet foods for decades. It’s considered to be safe and healthy for dogs. It contains several important minerals like magnesium, copper calcium, selenium, and also B vitamins which are all good for dogs’ overall health.

Sugar: And last but not least is sugar. Consuming a lot of sugar is not advisable for both dogs and humans, but consuming in moderation doesn’t cause any potential health risk.

Ingredients To Avoid While Feeding Your Dog With Multigrain Bread

There are certain ingredients sometimes present in the multigrain bread that is considered to be toxic for dogs. We need to check it before feeding.

Raisins: According to the American kennel club raisins are highly toxic to dogs and might cause fatal kidney failure. Dogs have shown to react adversely even with a few numbers of raisins too. So it’s better to avoid multigrain bread containing raisins.

Garlic: Garlic has shown to produce some serious toxic effects on dogs like abdominal pain, diarrhea, vomiting, etc. So we need to be very cautious in feeding bread that contains garlic.

Nuts: Nuts are quite healthy for humans but in general due to high-fat content it is not advisable for dogs. Some nuts like macadamia nuts are considered to be toxic to dogs. Moreover, almonds can cause choking effects. Apart from it, nuts cause stomach irritation in dogs.

Bread Dough: We have already mentioned earlier the risk associated with yeast, which is used in the preparation of bread dough to make it thicken and rise. So you need to make sure that your dog shouldn’t consume dough to avoid serious health hazards.

Xylitol: It is an artificial sweetener used in a variety of bread. Though it causes no harm to humans but can be fatal to your pooch. Xylitol poisoning symptoms are like vomiting, lowering of the blood sugar level, collapse, and even seizure.

When To Feed Your Dog With Multigrain Bread or Brown bread?

There are certain cases when feeding your dog with multigrain bread can be a boon like in the following cases:

Your dog has eaten a long piece of thread: Medically this condition is known as a linear foreign object. if left untreated can cause severe intestinal damage and even cause an intestinal wound. Bread can help it to pass the GI tract safely.

Your dog has consumed something with a sharp edge: It causes a very fatal condition called peritonitis. The sharp object perforates the GI tract and causes the food to spill out into the intestinal cavity. Consuming a large amount of any bread leaves the object or safely.

Your dog is having stomach upset: It might surprise you but the fact is bread is good for the dog when they are suffering from minor stomach alignments. In this case, the bread acts like a sponge to trap the irritants and let them pass the GI tract safely.

But in this case, it’s better to use brown bread or white bread instead of multigrain bread. Still, if your fur buddy is suffering from any stomach alignment it’s better to consult a vet and feed her with boiled chicken.

The calorie count of 100 gm of brown bread is around 246 while in the case of multigrain bread it becomes  251.

But multigrain bread seems more healthy to human due to the presence of a variety of grains. But many varieties of multigrain bread contains nuts or artificial sweetener like xylitol, which is fatal for dogs. So it is advisable to check the ingredient list and to consult a vet before feeding your pup with multigrain bread.

Whereas brown bread can be fed to the dog but should need to be fed in moderation and occasionally. Moreover, it is essential to feed in pieces rather than feeding the whole at once.

Bread is not dog food and it serves no good nor does it adds any dietary value to your pooch’s overall diet. So occasionally sharing a bite of your brown bread is ok but rather not make it a habit. Instead, opt for healthier options like a carrot to give her a little treat.