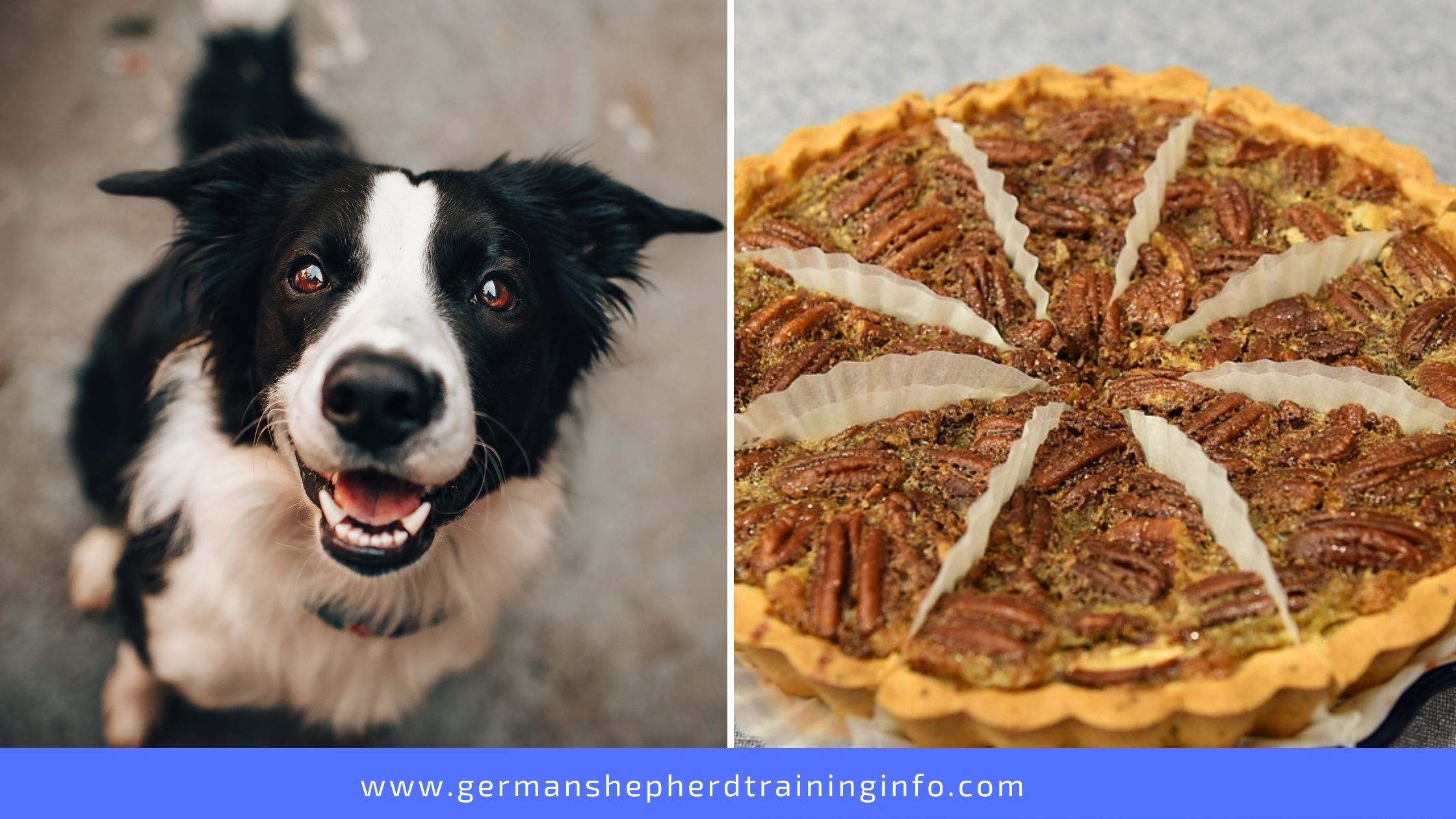 Pecan pies are most of ours’ favorite holiday food. Made from all the feel-good flavours, this pecan pie is a high-calorie dessert that is totally relished by all. But, at the same time, everything that we love should not be fed to the dog on a regular basis.

Deserts and other meals which are good and healthy for us might not be the best option for our furry friends. But, is pecan pie one of the ‘not-to-have food items’ for dogs? Let’s find out by carefully analyzing what all is put in a pecan pie.

Common Ingredients of a Pecan Pie – Are they good for the dog?

Although everyone who cooks or bakes like to do their own experimenting with the ingredients of the food. But when talking about Pecan Pie, a few of the must-add ingredients remain the same. A usual pecan pie has Pecans, White or Brown Sugar, dark corn syrup, butter, lard, Eggs, and pecan shell or crust.

Looking at the list, you can gather that this dessert is not a really low-calorie or healthy option for both dogs and humans. Pecan being the main ingredient of the pie, let’s see if Pecans are really good for the dogs.

Pecans For Dogs – Should Have or a BIG NO?

Pecans are a kind of nuts, and nuts are supposed to be great for their food value and the kind of nutrients that they provide us with. So, does that mean it is equally good for our dogs? Well, the answer to this is NO. Pecans are extremely harmful to our four-legged members. To the extent that they can be fatal too.

Pecans are nuts that are rich in nutrients value, but at the same time, they are high in calories and fat. In fact, pecans are the nuts, which have the most amount of calories as compared to any other nut that is considered to be healthy.

You can see how many calories these nuts have. While so many calories might not matter for humans, but for dogs, they can be extremely dangerous. Pecans have over 19 vitamins and minerals, but at the same time, it also consists of a toxin called Juglone, which can cause seizures and neurological problems in our little dogs.

Pecans also consist of a natural poison called Aflatoxin, which is extremely harmful to dogs. While pecans are wholesome and beneficial for humans, except those who have nut allergies, our lovable dogs should stay away from them. The sensitive organs of the dogs cannot handle the toxins and other poisons that pecan gets with it. These nuts can cause intestinal problems along with many digestive issues.

READ :   How to stop German shepherd Puppies from biting your ankles?: Some useful tips and techniques

If your dog has managed to sneak a piece or two from the floor, don’t be alarmed, one or two pieces would be innocuous, but larger quantities can be so severe that they could also result in death.

So, if pecans are the main ingredient of the Pecan Pie, is it safe for your dog?

Now that we have established how dangerous Pecans can be for dogs, feeding them Pecan Pies would not be the best idea. The pecan pie recipe includes pecans and their shells, which are equally hazardous for the dog. The dog can very well choke up on the shells, and the consequences of this can be pretty scary.

The pecan pie is also made up of butter and lard, which are not good for humans too, leave aside dogs. These two ingredients are highly fatty and have a high cholesterol content which can harm the dog in many ways. Dogs that are lactose intolerant should be kept far-far away from butter, but this pecan pie is loaded with butter and lard. Moreover, this pie, due to the excessive amounts of butter and lard, can be hard to digest for the dog too.

The exact ingredients that make the pecan pie so sumptuous are the most harmful and hazardous for the furry members of our house.

The pecan pie also consists of a large amount of white or brown sugar, both of which are way too harmful to the dog, especially if your dog is diabetic.

What If My Dog Ate Pecans Or Pecan Pies Accidently?

Dogs have a habit of sneaking food from the floor. Firstly, dog parents should be extremely careful about food not falling on the floor, especially food that is toxic for their dogs. However, if accidentally your dog has 1 or 2 pecans, or just a bite of pecan pie, you should not be alarmed, as just a little bit is totally harmless. However, do keep a check if the dog shows any unusual symptoms.

Pecan pies, made from pecans have a highly toxic substance called Juglone and a natural poison called Aflatoxin that can harm the dog in many ways. If your dog accidentally has a lot of pecans or pecan pies, always watch out for these symptoms:

READ :   Pet Corrector Vs Compressed Air: Is There Any Difference At All?

If your dog is showing any or all symptoms, we recommend you taking it to the vet as soon as possible, as all these symptoms can be fatal.

Moreover, the dog should be kept far away from the shells of the pecans, as the dog can choke on it, and we need not explain how dangerous that can be.

In our opinion, Pecan Pies should be added to the ‘NEVER FEED YOUR DOG’ list, as they can be harmful, to the extent of being fatal too. The hazardous toxins and poisons in the pecans can cause severe problems to the dog. Moreover, being rich in butter and sugar, this pecan pie should be kept far far away from the dogs. There are a lot of other tasty desserts and nuts that your dog can indulge in. But, talking about pecan pies, they are something that will never be good for the dog.