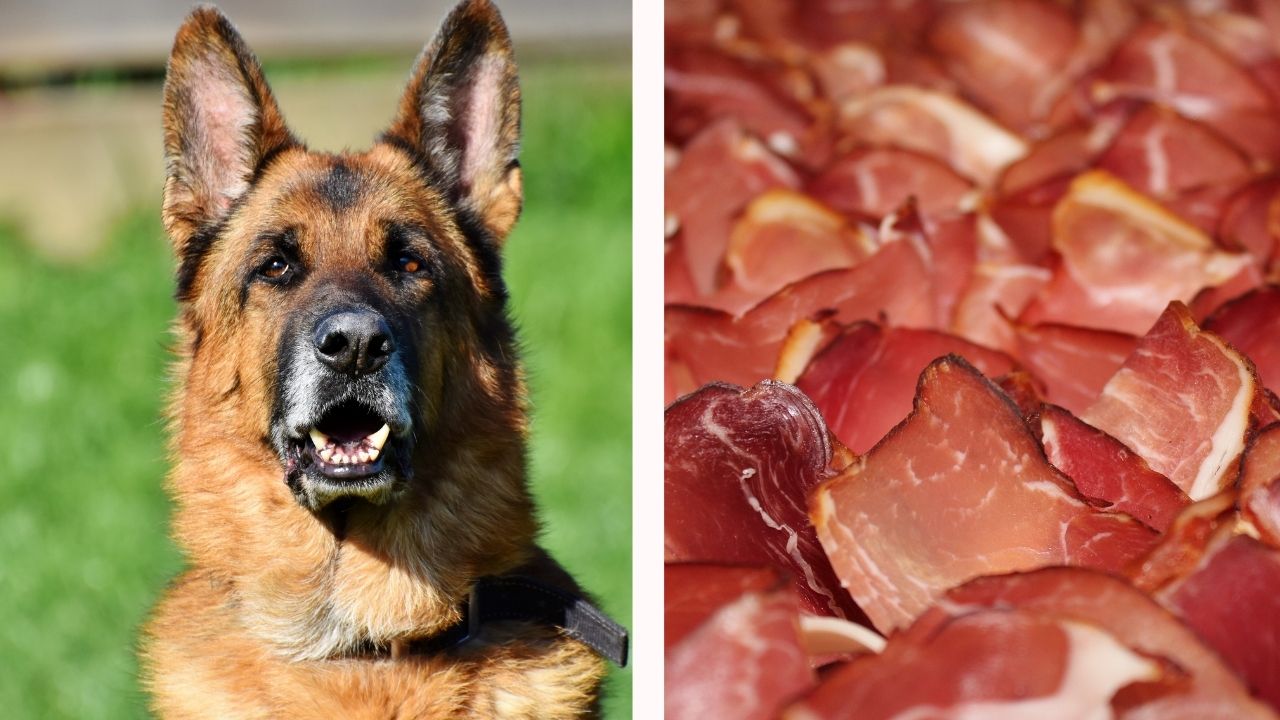 Ham, as you must know, is a part of the leg cut of pig meat or pork. It is usually available in processed form as canned food at the stores. It is preserved using the methods of wet or dry curing. Though it tastes heavenly, its fat content is notoriously high. So, if you are thinking if your German Shepherd can eat ham, then the answer is partial ‘yes’. Here is why.

How Ham can benefit your dog?

Dog and meat seem to be a natural combination. You may think, at first, that giving ham to dog to eat is surely going to make her spoilt for the choices of meats to eat. Why not bring a change in diet and change the conventional meaty bones rich food to a serving of ham? This is a common question to ask!

Especially, when you dog is salivating and staring at your ham preparation sitting close by your side, you will be the most tempted to serve it. Good news is that an occasional treat of ham is no harm for your German Shepherd! Ham may offer the nutritional benefits like:

1. Protein-rich food – Ham is very high in protein. According to a USDA report, the ham foods’ protein composition is something like this:

Your German Shepherd needs both protein and fat to stay healthy. However, the researchers are yet to arrive upon the consensus over the digestibility of hams. With just one or two researchers pointing at the goodness of ham, the votes against this human food for feeding to German Shepherd Dog are quite high.

According to a news article extracted from the University of Sydney website, the hams can pose the following health risks to dogs:

2. Steatorrhea – the passing of fatty stools by dog

So, though it is not straightaway poisonous or fatal, having said that, ham is not a safe food either. Moreover, the processed hams contain high sodium content which is again bad as it may lead to kidney damage and seizures. Overfeeding can leads a dog into a comma; it is that serious!

While taking care of all the harmful effects mentioned above, keep in mind the following points too while serving ham to the dog:

1. German Shepherd dog food already contains fat. So, feeding ham and dog food together is a big no-no. So, when you have fed him a slice or two of ham, do not feed dog food. Instead, you can go for some fruits like carrots or other safe, fat-free options.

2. Try to serve water-cured ham as its fat content is comparatively less than dry ham

3. Feed fresh-cut hams and not the canned and processed ones, the latter have high sodium content which can cause serious complications like seizures.

4. Keep water supplies handy when you have fed ham to your German Shepherd as it may feel excessively thirsty after eating this.

Ham is better when put in your sandwich, it is not something to be experimented with while considering a diet routine for dogs. Just a slice of ham can be safe for your German Shepherd.

Mostly, owners tend to feed dog with ham while they are in festive mood or are falling short of dog food during travel. So, to avoid this, it is better to stock sufficient dog food when you are travelling with the dog, or have planned a get-together at home.

Instead of going for ham, you can consider feeding the dog with some Sardines, or tunas, certain fibrous fruits and, vegetables. These options offer better food options when you want your dog to have break from their regular meal.