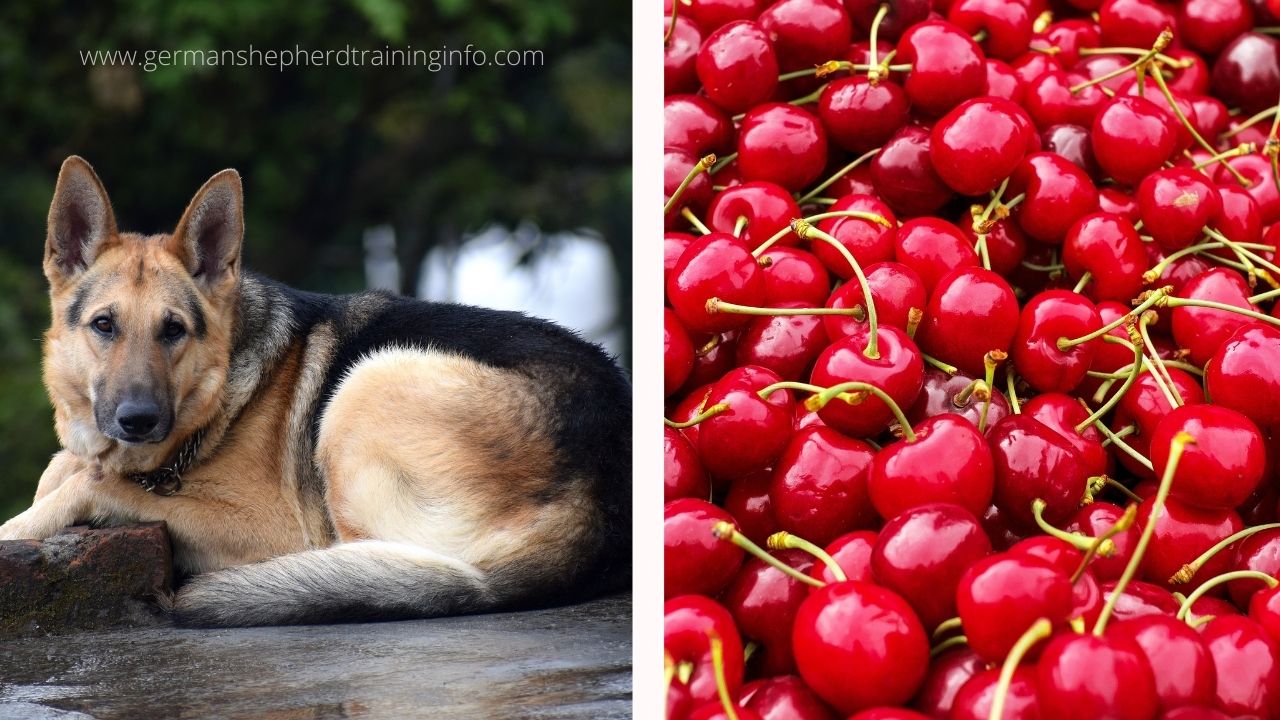 Cherries on shallow inspection look harmless and quite an attractive food because of their color and texture. You may yourself be a cherry lover as there are lots of good things written about the nutritional value of cherries. But, if you are thinking of sharing your bowl of cherries with your German Shepherd dog, stop right away! The truth is – Your German Shepherd cannot eat cherries. Here is why.

Facts that go against cherries for dog

All parts of cherries such as stem, leaves, and pits are found to be rich in cyanide content. Thus, you are exposing your dog to the threat of cyanide poisoning if you are serving these as such to her. The safer way considered for feeding cherries is de-pitting these first and only serve the pulp part.

According to some reputed pet shop owners, the harmful effects of cherries on dogs are:

You may think that processed cherries are almost the same as de-pitted cherries and should serve the purpose. But, the fact is, the canned cherries contain a large amount of sugar, which can cause a gastrointestinal disturbance in a dog. Your dog does not like the sugary products as you do. Their intestinal makeup does not permit them to have sugars in food. Researchers reveal that sugar can make the German Shepherd restless or hyperactive, and sometimes, irritable as well.

What to do if German Shepherd has eaten cherries?

If your German Shepherd dog has eaten the flesh of a cherry, means after your pitting it, you may not need to worry much. 2-3 pitted cherries may not cause much discomfort. you can observe the dog for up to 6-8 hours to find how his body has responded to cherry flesh.

If the dog shows the signs of intestinal blockage like reduced defecation, or constipation, you must take him to a vet. Trying home remedies is a big no-no, as your may be aggravating the situation rather than solving it. Vets can do abdominal wash or induce enema to clean the bowels and solve the defecation problem.

However, if your German Shepherd has eaten whole cherries accidentally, you must rush to a vet, if the dog shows signs like labored breathing or dilated pupils. The vet will make the dog vomit out all the poison and will take him out of the danger.

Safer ways to feed cherries – are there any?

Though it is confirmed that it is advisable to keep cherries away from your GermanShepherd’s reach, you may still want to know about safe ways of feeding cherries.

Well, that requires some extra effort from your side. Means, you have to practice exceptional caution before feeding cherry to the dog.

An easy tip is: Remove stems and pits properly before feeding it to the dog.

Honestly speaking, all these efforts taken will not result in anything. The risks of sugar-induced discomforts remain as such, first of all. Second, a major part of the fruit goes waste. Third, it does not serve the proper food required in the dog’s daily diet. So, why not keep cherries only for your consumption and have a serving of some safer alternative ready for the pet sitting by your side?

Ok, what about cherry-flavored foods?

Sorry to disappoint you, but again not advisable! If flavored food is checked closely, you will find it treated with a lot of chemicals, and sometimes, these are laden with artificial flavors too. So, the food becomes overly sugary for the dog, which will give you a hard time controlling him later.

While drinking my cocktail and felt like giving Maraschino cherries to my dog. Can I?

Maraschino cherry dipped in your cocktail may look harmless, as these are not containing any pits. But, their sugary content is not fit for the dog. So, it is better to keep it for yourself and trick your dog into eating something else instead of staring at your lovely-looking cherry.

Feeding cherries to German Shepherd is not a good idea at all. The risks associated with it should stop you from sharing these with the dog. Instead, include other fruits like an apple (core and seeds removed) or other recommended options in the dog’s diet, if you want to give the dog a break from dog food, or when you want to treat him with something different.