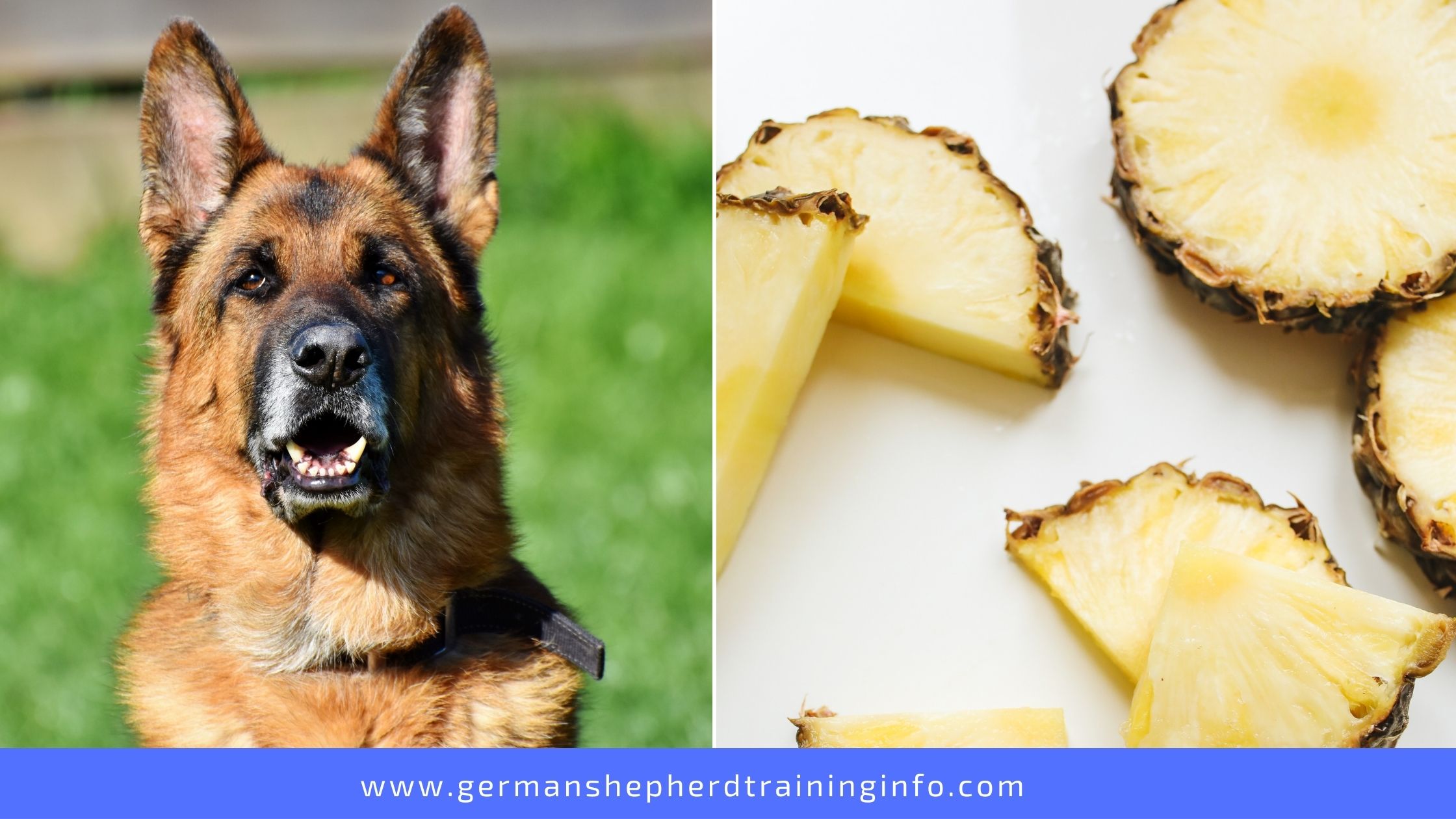 Yes, the crown fruit is an excellent choice of snacks. It is especially a delight when given to your German shepherd dog in a frozen form during those long sweaty Sundays.

You know, when the Sun is particularly intent on testing your patience. When all you want is juicy, icy popsicles to cool off the sweltering heat! What the heck, you might as well as have a bite-sized pineapple popsicle for yourself! Yummy!

But to get back on the subject of the dietary dilemma you face when you have juicy cut-up pieces of pineapple by your side and your German shepherd is eyeing them with all the expectations in his little heart.

Pineapple essentially is a health fiesta. It contains Vitamin C, Vitamin B6, riboflavin, thiamine, folate and niacin. It builds up your German shepherd’s immune system and repairs its damaged cells. It also helps regulates hormones and neurotransmitters and helps the doggy brain perform all those loop jumping tricks effectively.

It also contains more than eighty percent water and hydrates your dog’s skin and nourishes the coat. It is also blessed with an ample amount of anti-oxidants. We could go on and on, but we hope you caught the drift.

But, of course, there is a catch.

Golden Mean is the Golden Rule

If Aristotle has a quote for dogs, it would be this. Moderation is the key when you plan your dog’s dietary chart. This is especially true in the case of fruits like Pineapple. This is because hidden beneath the mountain of the goodness of its treasure of Vitamins and minerals, is a small gate to certain health issues.

READ :   Can I Give Imodium To My German Shepherd?

Pineapple is a fruit that is high in sugar content and thus can play havoc on your German shepherd’s pancreas. In addition, excess intake of Pineapple can lead to weight gain among GSDs. And you wouldn’t want your energetic ball of fire to turn into a sloppy Joe!

Remember, the protagonist in Ali Baba and the forty thieves was rewarded because he took a moderate amount of gold out of the mountain cave. On the other hand, his greedy brother who decided to go for the excess ended up dead!!

Pineapple also has high fiber content. Hence, it may not agree with the digestive systems of certain German shepherd dogs if they hold a weak stomach.

It is thus important to introduce pineapple to your dog in small amounts and keep a lookout for any adverse reactions.

It is also not a good idea for you to feed your dog with a pineapple snack in case he is suffering from diarrhea.

Keep The Can Closed

Those canned pineapples and dried pineapples that you get off the counter are a bad, bad idea. We cannot stress this enough.

This is because once the pineapples are all dried up; they lose their water content and instead turn into poisonous bites of concentrated sugar. To put it simply, you get more sugar per bite than what you would get in natural pineapple pieces of equal size.

To add to this calorie disaster situation, the canned items often contain flavored additives and preservatives which may prove toxic to your German shepherd. One such example is xylitol, an added sugar in canned pineapples meant for human consumption, which even in small quantities can threaten your dog’s life.

All great things have myths attached to them, why should the dog-pineapple combo be left out of it. You might have heard of the behavior of coprophagia among dogs. A less appealing play of words will be dogs tend to eat their own poop.

Now, if modern folklore is to be believed, Pineapple contains an enzyme called Bromelain (well, this part is scientifically proven), which on ingestion imparts a foul smell to the dog poop, which in turn prevents the dog from eating its own excreta(this is where the scientific evidence becomes a little fuzzy).

However, we wouldn’t want you to place too much faith in this idea. It is just better to clean up the doggy dump before he lays his mouth on it.

Pineapple is a delicious fruit. And serving it in different styles will you get those extra brownie points, straight from your dog’s heart.

So put up that thinking cap and get innovative!!

Slice it into small chunks and mix it up with yogurt. Freeze it in the fridge and serve it like a Popsicle. Crush it and put it in an ice tray and serve it ice cube style. This way your dog can play with it for a long time, before finally licking it clean.

You can also serve it as a mixed fruit salad of healthy fruits. And yes, remember the ‘treat should not be more than 10% of the daily diet’ rule.

It is important to cut the pineapple properly before serving it to your dog. This is because the outer skin is spiky and the inner core is hard, and both can result in a choking hazard for your German shepherd if you are not careful.

Also, the pineapple pieces need to be cut into small, bite-sized pieces; so that your dog may be able to enjoy them without being bothered to struggle with cutting them. After all, even a German shepherd likes to be metaphorically spoon-fed once in a while. Plus, again, it is easy on the throat.

Treat your German shepherd dog to a savory pineapple treat, especially as a positive reinforcement if he has given a spectacular performance in his daily training. However, make sure it is in moderation and do not in any manner, make it a part of the daily diet.

Now that we are clear on the dessert, let’s have a look at the main course menu and find out if German shepherds can eat turkey.