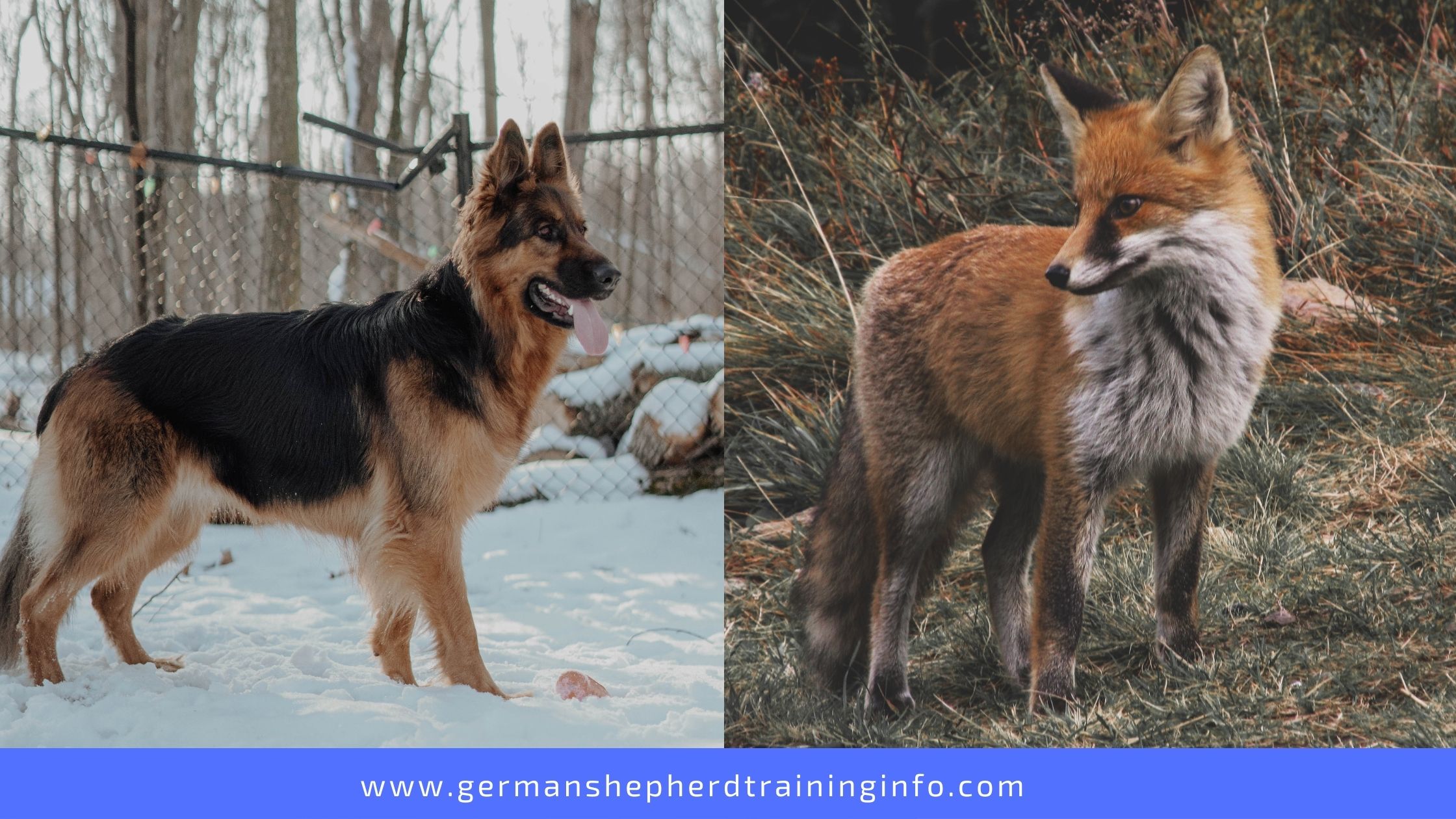 German Shepherd Dogs are one of the most popular breeds in the world. And that is for all the right reasons. They are loving, protective, and muscular. This is one breed that can go to any extent to protect its owner or itself.

German Shepherds are considered to be one of the strongest, most agile, and robust breeds. There is no denying that this breed is powerful, and dangerous if agitated, or if it senses danger. This breed is capable enough to catch its target if it’s running away. It is very capable of killing small animals, but can it also kill a fox?

We know how dangerous and menacing a fox can be, but is our loving yet indomitable German Shepherd capable of killing a fox? Let’s find out by closely examining the qualities of a GSD.

Qualities of a German Shepherd Dog

Dynamic, vigorous, and mighty- these words can describe a German Shepherd pretty well. There is no contradiction that this breed is way too protective about its owners, and they can go to any extent to guard them. Being super muscular, this breed can kill many large and small animals.

German Shepherds being muscular, and powerful are capable of severely injuring anyone if agitated. This breed’s bite force exerts 238 psi (pound per square inch) which is strong enough to create mighty bruises on anyone. Since a GSD is considered to be a large breed, the maximum strength comes from its bites only because of its strong jaws.

How strong and muscular these breeds are can be comprehended from the fact that German Shepherds serve many militaries and police forces. Their strength can also be determined by the fact that they work as farm dogs and are super agile and active in nature.

However, to kill an animal, just strength and power are not enough; one must even be intelligent enough to sense the move and motive of the opponent. Now we all know how intelligent a German Shepherd is. Therefore, sensing the motive of the animal or the target would not be a great task for this breed.

A German Shepherd has a genetic nature and skill of being intuitive, guarding, and protective, which makes this breed super capable of killing anyone with wrong or ill motive.

Can a German Shepherd Kill a Fox?

German Shepherds are super wise and have a strong natural instinct. Therefore, judging the motive or intention of the animal in front of them is an easy task for them. Although, the truth is also that a German Shepherd will be purely harmless to an animal from which it does not feel danger or that the animal has a wrong motive.

When talking about foxes, this is one animal who is always super cautious about bigger animals than them. Foxes feel threatened whenever a big animal is in front of them. Although they constantly hunt for meat, day in and day out yet, they tend to get scared whenever an animal larger than them comes near them.

They are known to be one of the smartest creatures. However, a fox is also smart and quick, but a German Shepherd is way smarter and more agile than a fox.

German Shepherds kill by biting, and the bite force of the German Shepherd is 238 psi (pound per square inch), which is enough to kill anyone and any animal. Talking about the fox, its bite force is about 92 psi, which is way lower than that of a German Shepherd, making a GSD more dominant in this sphere as well.

The known fact about German Shepherds is that they will not kill anyone if they do not detect danger. But being super protective of its owners, puppies, and territory, they can easily kill a fox.

From all the aspects calculated above, it is easy to conclude that a German Shepherd can very well and very easily kill a fox, just like it can easily kill a snake. However, a GSD will never attack any animal if it is not posing any danger on the dog, but if it even slightly detects danger or any ill motives, then the GSD will not spare the animal which is in front of it. When talking about whether a GSD can kill a fox, the answer to this is YES; it very well can. Their high intelligence level, superior size, and strong bite of the GSD are enough to kill the fox.

1 thought on “Can German Shepherds Kill A Fox?”