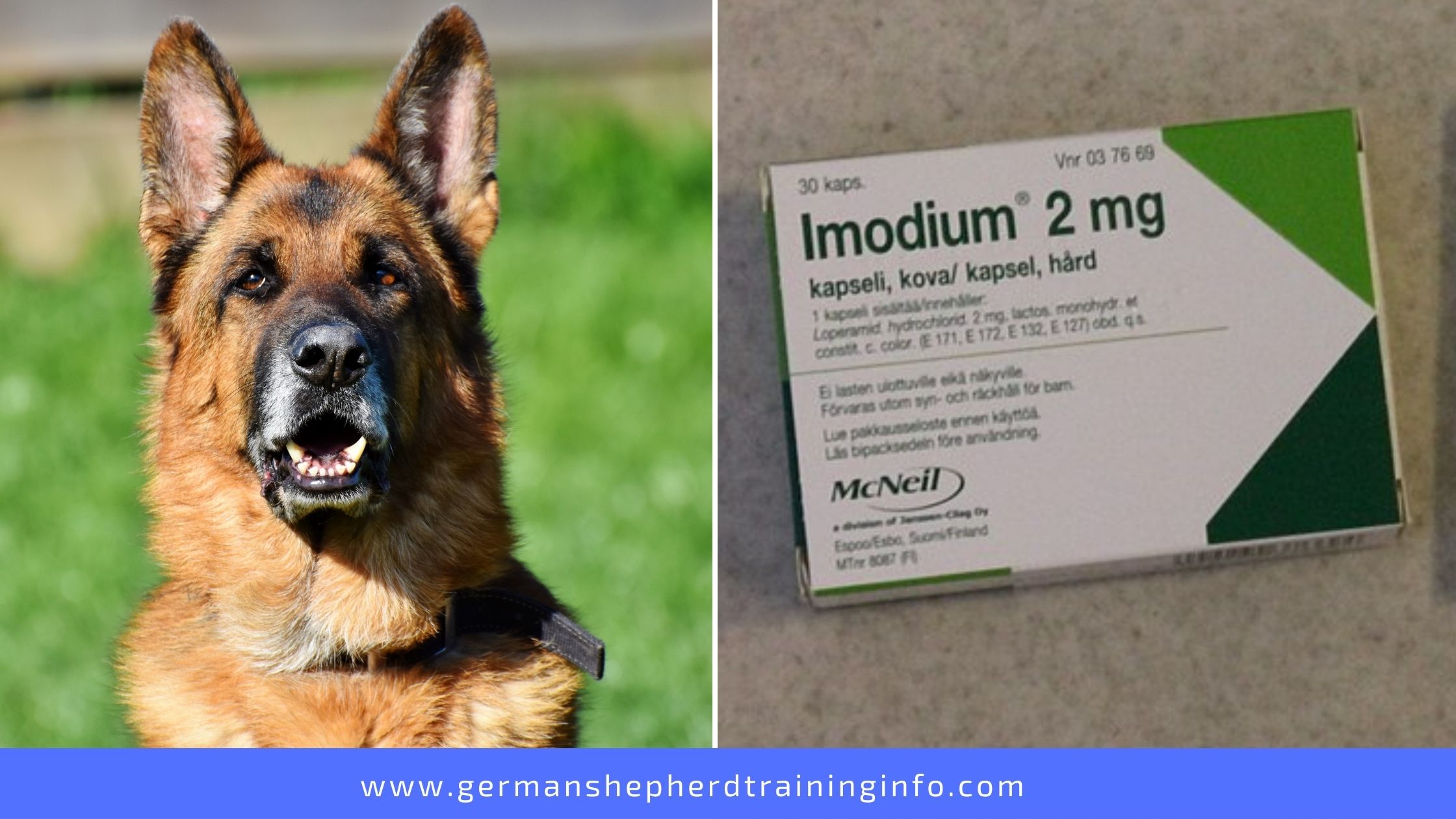 Whenever our dogs suffer from diarrhea, we often get confused about whether to rush them to a vet or treat them at home only. Treating them at home means giving them certain medicines like Imodium. But, is this a safe bet?

Imodium is a medicine that is commonly used to treat dogs who are suffering from diarrhea. Basically, the drug in the medicine is loperamide, which works by slowing down the movement in the intestines, which in turn allows the intestinal walls to absorb electrolytes and water. This drug also prevents food from moving too quickly.

It also aids in the proper digestion of food in dogs, which helps to cure diarrhea, making our furry friends healthy and happy. So, if Imodium actually helps dogs with digestion and diarrhea, is it okay to give it to a German Shepherd too?

Can I Give My German Shepherd Imodium?

Since Imodium is super effective for dogs, it is alright to give it to a German Shepherd as well. However, a few things that should be kept in consideration are that Imodium should be given in moderate amounts and that too after consulting from a vet.

These over-the-counter medicines often react adversely, and that is the reason why they should be given in the amount suggested by your vet. The vet considers a variety of factors before suggesting the amount in which this medicine must be given to a dog, especially a German Shepherd dog. These factors could be the age of the dog, the health condition, whether the dog is pregnant or not, and the severity of diarrhea.

When Not To Give Imodium?

Most Vets consider Imodium a safe medicine, just like other over-the-counter medicines. However, it is to be noted that this medicine must not be given to pups, nursing, and pregnant German Shepherd, especially if not consulted with a vet. This is purely because Imodium is a synthetic opioid, and overconsumption of this drug can lead to serious health hazards.

The other category is German Shepherds who are suffering from kidney diseases, hypothyroidism, and liver diseases. In cases too, Imodium should never be given to such a German Shepherd, especially if you haven’t consulted their vet.

Another factor to consider is Genetics. Herding dogs, including German Shepherds, have a gene that prevents them from breaking down Imodium. This can cause serious side effects in the body of the dog. In most cases, previous allergies should also be kept into consideration.

Overdose and side effects of Imodium could result in –

Other than that, this medicine has proven to be quite useful for many breeds of dogs, including German Shepherds.

Canine nutrition is quite different than human nutrition. However, one thing that acts for both of them is having probiotics. Foods or supplements that contain live microorganisms, like yogurt, should be given to the dog, even to the German Shepherd, if their stomach is acting up. This yogurt has good bacteria, which will cure their diarrhea, and make them healthy and fit as a fiddle once again.

However, this too should be consulted by a vet, because your German Shepherd might be lactose intolerant, or might have some other underlying allergy.

In some cases, it is also advised to leave your dog fasting for a bit, till the time its digestive system runs its course. Reintroducing food later in smaller portions becomes bliss for the dogs.

Certain food items too act in favor of the dogs, especially German Shepherds when it comes to treating diarrhea.

Diarrhea is super common among GSDs. In almost all cases, it gets cured easily without even requiring a trip to the vet, However, many times it could signal a serious health condition too. So, one should not take it lightly and remember to cure it in the initial stage.

Waiting for 24 hours, and then rushing to the vet should be the thumb rule when it comes to dog parents.

In our opinion, when it comes to Imodium and other over-the-counter medicines for dogs, a vet should always be consulted before you start with a new medication. In case of diarrhea, always make sure to give the quantity of this medicine which is prescribed by the vet of the German Shepherd.

It is true that Imodium is a safe medicine, which gives instant relief to the German Shepherd, but a million factors must be kept under consideration. Hence, make sure to talk to your vet, and then give such a medicine, as this can also cause more harm than good.