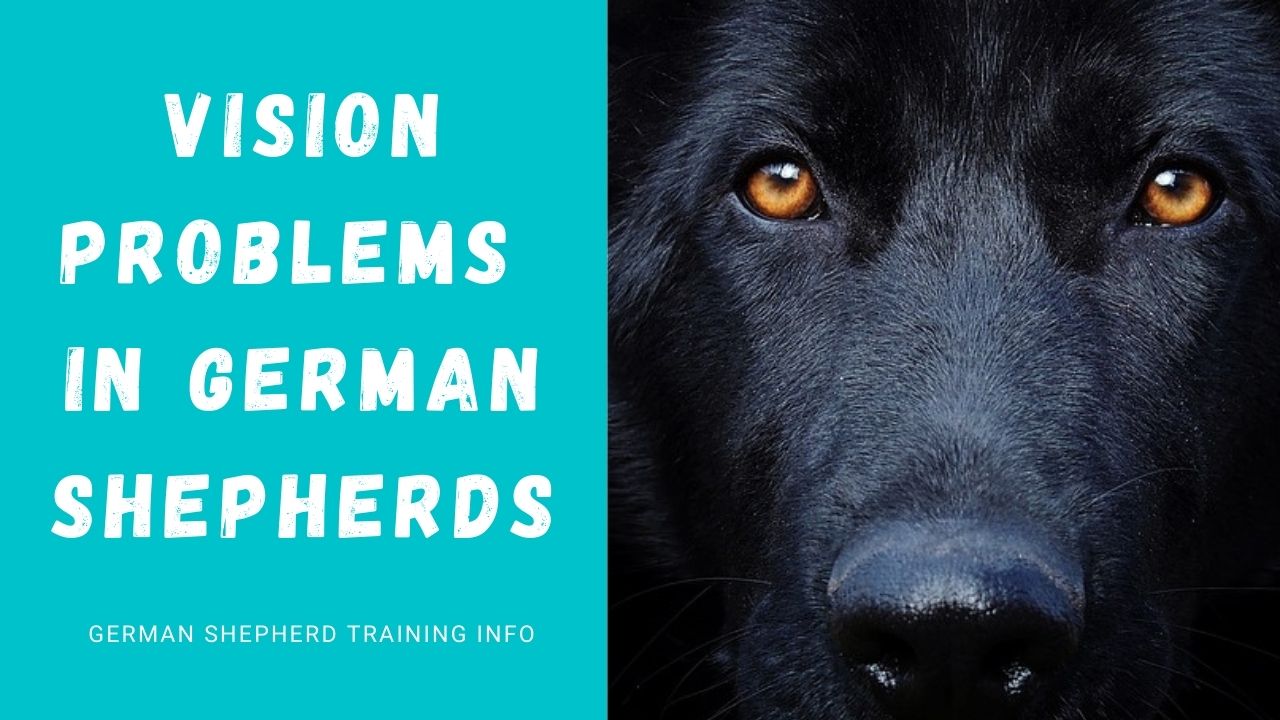 German shepherds in general are considered healthy dogs. In fact, what better evidence is there, other than the fact that they are called upon by national governments to protect their citizens as a part of the k9 Human dog police units.

However, it is true that selective breeding to allow for the best line of German shepherds to breed has also led to the perpetuation of certain genetic fault lines.

Eyes too have become a victim of these selective breeding techniques. Apart from these, certain external and environmental factors can also contribute to vision defaults in these magnificent beasts.

However, lose no hope! Most of these diseases are curable by intervention, provided you remain fully aware and always have an eye on your Canine friend’s optimal health.

To help you get a hang of the vision issues that might plague your German Shepherd, here are some of the most common vision problems in German shepherds are:

The medical name for Pannus is Chronic Superficial Keratitis. To put it in simple layman terms, scar tissues and blood vessels cover the cornea of the eye, and if the progression is not taken care of at the earliest, it can lead to vision loss in your German shepherd.

It usually starts in a sneaking manner from the lateral side of the eye in form of a pink mass. It progresses with pigmentation and scarring of the cornea and can be associated with mucous discharge.

Common symptoms among German shepherds tend to be black or brown pigmentation in the cornea, bloodshot eyes with a thin pink covering, excessive weeping, and thickening of third eyelids.

It usually affects middle-aged German shepherds and tends to affect both eyes. Although the causes of this condition are not absolutely clear, it is largely believed to be an autoimmune disease.

The factors aggravating the situation are high altitudes, increased exposure to Ultraviolet light, and smoke. German shepherds that are requested at higher altitude regions have a tendency towards this disease, combined with previous predisposing genetic factors.

Treatment usually involves corticosteroids or immune-modulating drugs like cyclosporine. In some cases, surgery is recommended.

However, timely intervention with topical steroids can help curtail this disease to a large extent.

Cherry Eye is a name given to the prolapsed tear gland at the base of the third eyelid of the dog. It is because of the rounded appearance that the gland projects, along with a smooth and hyperemic (blood vessels filled)appearance, that the term ‘ Cherry eye’ is attributed to the disease that infects the Apple-of-our- eye  German shepherd dog.

If the situation is not corrected in the due course, the cherry eye affects the secretory glands and leads to their malfunctioning.

This implies that the dog can no longer shed tears.

Happy news? Not at all.

The tears are important to keeps the eye wet and act as a protection against a number of external agents. Thus, a dried-up eye leads to Dry eye syndrome or Dry Keratoconjunctivitis.

Symptoms among German shepherds include a pink or red rounded structure at the medial angle of the eye. There is significant inflammation of the eye tissues and excessive tearing.

Conservative treatment in the case of Cherry eye disease usually always relapses and hence surgery is usually recommended as the best course of action. The disease needs to be usually followed up for the rest of the dog’s life as chances of relapse still remain.

It usually affects young German shepherd pups below 1 year of age. It usually occurs in only one eye and bilateral infections are considered very rare.

It is a genetic disease that is usually autosomal recessive in most breeds.

The early onset PRA is usually diagnosed within 2 to 3 months while the late-onset PRA can be diagnosed as late as 3 to 9 years.

The first symptoms of the disease are night blindness and the German shepherd dog displays nervousness after the dark hours. Eyes appear very reflective when light shines on them and pupils appear dilated.

As mentioned, it is an inherited disease and usually affects both eyes. As of now, no effective treatment plan has been formulated for this disease. Generally, dogs affected by the disease are discouraged from breeding.

Glaucoma is a disease that is associated with increased intraocular pressure in the eye. This in turn ends up damaging the retinal tissue in the eye which can lead to permanent vision loss. Acute Glaucoma is considered a medical emergency.

Primary Glaucoma is associated with an inherited defective drainage angle and some breeds are especially prone to it.

Secondary glaucoma, on the other hand, is caused by injury to the eye, which in turn leads to an increase in intraocular pressure.

The common symptoms of Glaucoma are pain in the eye, swelling, watery discharge, and loss of appetite. The cornea may appear bluish in color.

The treatment includes efforts at the drainage of the eye fluid through medication and surgery. Analgesics are given to relieve the pain. Follow-up must be done. Prognosis depends on the extent of damage caused by the disease before intervention was done.

Yes, dogs can have Cataracts too. Cataract is the opacity that develops inside the lens of the dog. It is usually hereditary and German shepherds too are predisposed towards it.

Sometimes cataracts may occur as a secondary implication of other inherited diseases among German shepherds, for e.g., Progressive retinal atrophy or even Glaucoma. Cataracts can also occur if your German shepherd is diagnosed with diabetes.

It may occur in one or both eyes.

Vision loss and loss of agility among German shepherds may point towards cataract.  A German shepherd may however be able to overcome vision loss if there is partial opacity or point opacity in the lens.

Generally, medication is not effective to stop the progression of the cataract if it is the primary disease and surgical removal of the opacity is the only viable mean. At times, your vet may also put in place an artificial lens, especially if the dog is small.

Follow-up on regular basis is advised and timely intervention can avoid blindness.

Entropion is a condition in German shepherds which causes the eyelids to roll inwards towards the eye. It can affect one or both eyelids and either of the eyes.

This causes scratches and rashes in the dog’s eye and can compromise his vision.

Eye ointments are available as a palliative treatment for Entropion. Sometimes the pups grow out of it. However, if this does not occur, surgery is the next course of action. It usually shows very good results.

Vision is an important dimension of the personality of the German shepherd dog. It is thus of utmost importance that its optimum care is taken.

You need to be on a constant lookout for any eye inflammation or watery discharge, especially if you often subject your dogs to areas with excessive smoke discharge (and yeah, you can lose that cigarette too!).

Getting your pup checked by a vet for possible congenital vision defects is also a good idea. Keep that crust around the eyes clean and wash their eyes once in a while with highly diluted saltwater. Also, make sure to keep their diet healthy and you will always have those gooey eyes to yourself that convey a world of warmth.

And speaking of the gooey eyes and non-verbal conversation, find out what your German shepherd means when he places his paw on you.