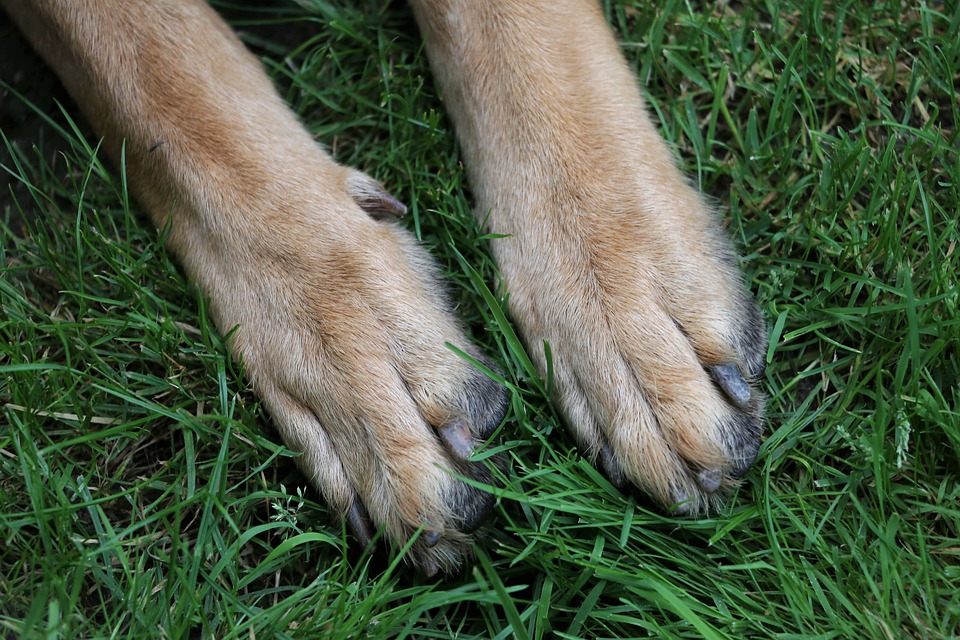 Yes, they do. Most definitely on the front legs. Sometimes on the hind legs.

The next question that might raise your canine-related curiosity is as to why they are named so. You might also ponder on whether to have them removed and the implications of doing so. Do they have any functionality or not, and why is there such a fuss around the issue?

In today’s era where animal rights have acquired a newfound dimension of ethics and empathy, all veterinary advice has to be dispensed in deference to the above parameters. However, practicality has to be kept in the play too.

Let’s get you a 360-degree view of this controversy around the claws.

They are an equivalent of the human thumb, although not as important functionally. Dewclaws are toenails on the upper inner leg of almost all dogs.

They are believed to have been named based on the fact that they are high up in the legs to brush the dew of the leaves while running on the grass. Full points to the earlier dog breeders for this discreet observation and visualization!

Dewclaws in the front

Almost all dogs have dewclaws present in their front legs. In fact, it is connected by two major tendons and has its own nerve supply and blood supply.

The dewclaws on the front legs are believed to provide postural balance to dogs, especially when they are running at a high speed. It is also used by them for climbing and providing that necessary friction on an extra slippery surface.

There stems the first part of our controversy. For a long time, dog experts believed that dewclaws were essentially useless! While the view has largely become redundant now, there are still dog breeders who hold the old-fashioned view towards dewclaws.

Dewclaws in the hind legs

The hind legs may also have dewclaws, but they are present only rarely and not in all German shepherd breeds. Their functionality is also not up to the level as that of the front leg dewclaws.

In fact, unlike the front leg dewclaws, the dewclaws in the hind leg are merely attached by a skin flap and tissues. It’s like God wanted to make them useful, but changed His mind at the last minute!

There might also be double dewclaws or even triple dewclaws in the hind leg, which are to be necessarily removed.

How do predict the dewclaws on your dog’s hind leg? All you can manage is, vague guesswork based on Genetics.

The Dewclaws in the Front leg are the ones in debate. The ones at the back are a lost cause for most breeds in general and the German shepherds specifically.

Controversy around the removal of Dewclaw

This brings us to the center of the dewclaws controversy. This is one where the metaphorical swords are easily drawn by believers of both sides of the spectrum and the debate is often emotionally charged.

If you don’t have a stake in the game, we caution you to stay away from it when the debate heats up!

You see like we pointed out, earlier breeders believed that the dewclaws were useless. They also believed that removing them will add to the dog’s aesthetic appeal while performing shows.

The trend caught up with the general public and removing the dewclaws became the in-thing, without any rhyme or reason on their part( yes, the blind following was a disease long before social media brought about the pandemic!)

In present times, the knowledge that dewclaws may indeed be useful for the dog has brought the practice back into the spotlight. The argument for and against the removal of dewclaws goes like this:

Argument for the removal

The basic premise of the argument, apart from aesthetic, is that dewclaws often suffer an injury while the dog is running or even walking in rough terrain and hence gets easily fractured.

Often, it can tear up even by getting entangled with the home furniture. Removal in this case becomes even more painful.

It is also true that since the dewclaw does not touch the surface often, it has a tendency to outgrow. Many times, the dog owners are not careful and do no trim it properly, the bear claws can outgrow and then break, which also leads to severe infection.

Also, it is believed that dewclaws left untended can invite cancerous growth.

Argument against the removal

Veterinary experts and some dog breeders today believe that dewclaws in the front help the dog in maintaining balance and provides agility to its movements.

Also, it is believed that the removal of dewclaws can lead to arthritis in dogs in later life, especially in carpal tunnel joints.

Some breeding standards also require certain breeds of dogs to have dewclaws in front legs.

And backing up to square one, in this day and age of enlightenment towards animal rights, a section of breeders believe that merely aesthetics is not a good enough reason for the cruel practice of depriving a poor German shepherd of his dewclaws.

Some countries like Australia have made removal of dewclaws illegal unless it is medical reasons. Others, like the United States of America, have left it to individual states to decide.

You might need to check the breeding standards of German shepherd breed in your area before making your decision. It is best to make sure that the law is on your side, no matter which side of the fence you are sitting on.

How are the dewclaws removed?

Some breeders also prefer to get this done when their German shepherds are under General anesthesia to get neutered or spayed. However, removing the dewclaws in later life is not advisable as your dog may have to face the emotional trauma of losing a claw. Also, he may face initial issues in maintaining his gait without the claws.

Your dog may also have to wear the Elizabethan Collar so that it does not interfere with the bandages and fester the wound. The healing may take three weeks to a month.

The presence of Dewclaws in German shepherds has divided veterinary experts on whether they should be removed or retained. Laws in this area are also ambiguous.

While some breeders claim that the removal of the dewclaws improves the showmanship of the dog, others call it an outdated and cruel practice. Dewclaws in German shepherd is thus an emotionally charged issue that has still not been sorted.

As we leave you in this hot mess, let us lighten your mood by throwing light on how the police train German shepherds.