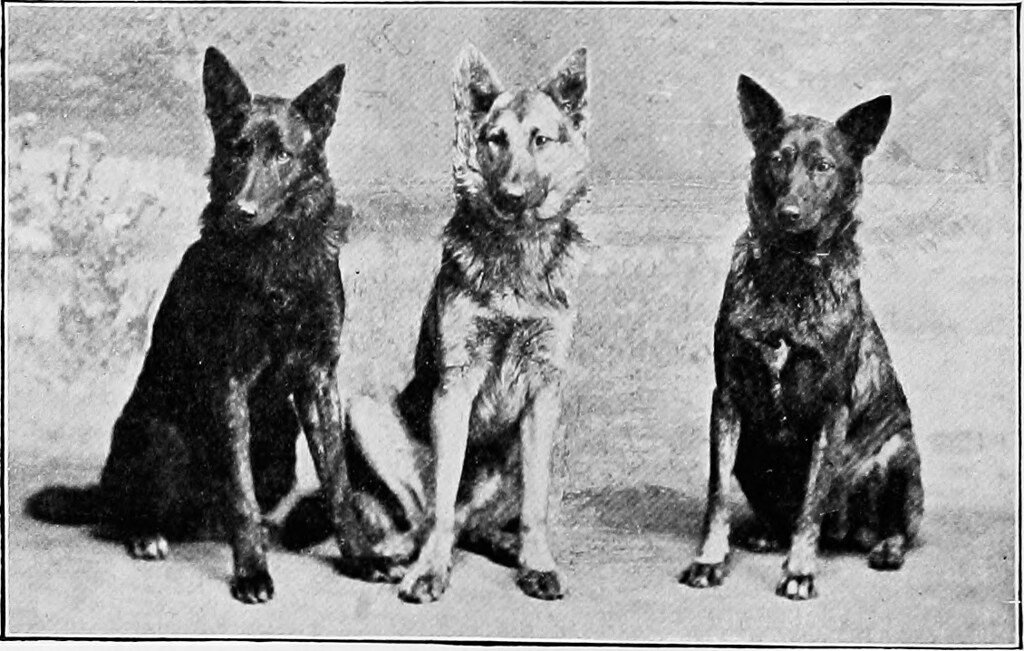 Pets leave non-erasable footprints in our heart that makes our life fulfilled, by awakening the portion of soul. Every moment of life with them ensures just unlimited love and warmth. Dogs, the most common class of pets, are not lacking any of the aforementioned and are, in fact, the idol of loyalty. One of the most versatile and unique cadres of dogs is the German Shepherd, which is the world’s smartest breed of dogs.

Their exceptional traits have employed them in a variety of usage as a police dog, sheepdog, sniffer dog, and a therapy dog, among other roles. It has a vibrant melange of beauty, intelligence, and shrewdness that earned it, its huge reputation. Its popularity grew considerably after sharing space with protagonists in prominent films like Inspector Rex, etc.  In this article, you can explore to understand its origin, history timeline, and some intriguing historical facts besides its role in war and peace.

Genetic studies in 2018 found that the origin of German Shepherds is traced back to the 1850s, where there arose a need to standardize the existing dog breeds to cater to human needs.

These breeding attempts were made for preserving the existing traits in dogs that helped the shepherds in safeguarding their sheep. Germany had this practice of breeding locally and within the local communities of the available dogs. The results were also so positive that the progenies had all the necessary skills for herding and safeguarding sheep. Some of these qualities include speed, intelligence, smelling sense, and excellent strength. But the major problem was that the abilities and appearance varied slightly from one locality to another.

Thus, the Phylax Society was created in 1891 for standardizing the breeds, i.e., to get uniform potential, appearance, and performance in the dogs. But the major groups had a difference of opinion that led to the conflict in both of them. The main variance of opinions was about which qualities need to be promoted in the dogs.  One group demanded that dogs must be bred only for offering the right skills required for work; the other group fought that the dogs must be bred only for appearance. The ongoing conflict led to the dissolution of the society in 3 years, and thus, the goal of standardizing was unsuccessful by the society. Nevertheless, the idea of society inspired people to standardize the breeds independently, on their own grounds of breeding.

Before they could think ahead, there was an unprecedented challenge of industrialization and urbanization in Germany. It reduced the count of predators in the nation, whereby the need for dogs for herding sheep also went down. But, at the same time, the sheepdogs were understood as a versatile, sharp, clever, and majestic class of beings. This realization of their potential began to spread.

How the first German Shephard Evolved?

In the same duration of time, Max von Stephanitz, a former student from the Berlin Veterinary College, ex-member of the Phylax Society, and also an ex-cavalry captain, strongly believed in the fact that dogs must be bred only for working. Also, he was in search of a perfect dog that could have the desired amount of intelligence, ability, the strength of the native shepherd dogs of Germany. But, unfortunately, he couldn’t find a dog meeting his expectations.

But, luckily, in 1899, Stephanitz attended a dog show and found a dog named Hektor Linksrhein. The history of Hektor was that it was a skilfully obtained product of selective and careful breeding for a few generations. The best part was that it completely met the expectations of Von Stephanitz of what a working dog should be like. He was highly satisfied with the physical strength, intelligence, loyalty, magnificence, appearance. So, he purchased it at that very instant.

Post purchasing, Von Stephanitz changed the name of the dog to Horand von Grafrath and also simultaneously came into existence, Verein für Deutsche Schäferhunde (the Society for German Shepherd Dogs), founded by Von Stephanitz. Horand was the first dog to be registered in the Society, and after that, the German Shepherd breed got the greatest fame around the world for the ample benefits it offered. Also, Horand was used as the source/father of many puppies and for the onset of generations of vibrant German Shepherd dogs, and the most successful of all the progenies was Hektor von Schwaben.

The early 1850s had the initial attempts at breeding the great breed of German Shepherd that was undertaken to standardize the appearance and actual abilities of the breed throughout Germany.

The German Shepherd was first exhibited at a show in 1882 in Hanover. It was the first step towards the world, recognizing these rough-coated, tiny tailed, and slightly resembling mongrels.

The Phylax Society was formed in 1891 to standardize the breed quality and breed appearance. The following years saw the contradiction between opinions inside the groups of Phylax Society.

In 1899, Von Stephanitz attended the show where the dog Hektor Linksrhein was bought. Hektor was a skilfully obtained product of selective and careful breeding for a few generations and completely met the expectations of Von Stephanitz. He evolved as the father of many vibrant generations.

The first exhibition of the German Shepherd dog was witnessed in America in 1907 in Newcastle and Philadelphia, which was a breakthrough in history. Visitors and participants actively took part and immediately spotted the new breed.

READ :   German Shepherd Tail Problems: What Is The Tail-telling You?

The German shepherd dog club, founded in America, had its first exhibition in Greenwich, Connecticut, in 1915. The club name was modified as Shepherd Dog Club of America since America entered World War 1 against Germany. England chose another name for the breed – “Alsatian.”

Queen of Switzerland, the first German Shepherd, gave birth to its puppies. Unfortunately, it wasn’t successful due to poor breeding, which caused the breed to suffer a slight decline in popularity in the 1920s.

The Verein für Deutsche Schäferhunde (the Society for German Shepherd Dogs) seemingly had about 50,000 dues-paying members with more than five hundred branches in just Germany alone.

The canine film stars, featuring the German Shepherd, became so renowned,  and Rin-Tin-Tin won almost all of the votes for a supporting actor, offered by the Academy Awards in 1929.

England witnessed the changing of name, “Alsatian” and “wolf-dog hybrid” back to German Shepherd in 1977 due to constant pressure from dog enthusiasts who worried that the name could affect its legality and popularity.

As of 2009, the German Shepherd breed was the second most popular breed in the US. Also, the breed is one among the most famous ones in other registries, and they were introduced to athletic competitions too.

German Shepherd: The Hero in Wartime and after peace

Their role in Wartime:

The German army wasn’t first sure of the usefulness of the German Shepherds in wartime. But the utmost benefits received by introducing the German shepherds in the police force opened the doors for the dogs to have a place in the frontline in World war I. During the war, these dogs mainly focussed on locating and spotting the injured soldiers, conveyed messages, and alerted if there were any enemies found.

The capabilities of the German shepherd even fascinated the Allied forces, only to leave the soldiers with tons of stories about the abilities of the German Shepherd breed, and many even took back many dogs with themselves. Importantly, the first Rin Tin Tin was one of the early dogs that displayed an extremely great contribution in World War 1. It survived the bomb attack and then became the favorite of Lee Duncan, American Corporal, who brought him back to the United States. Due to this inevitable role of German Shepherds in World War 1, they were also necessary for having victory in World War 2, and they were counted upon by home as well as foreign nations.

Their Role in Peacetime:

As a result of their ultimate loyalty, majesty, strength, and intelligence, the dogs were heroes in World War I and II. Even after the war ended, their significance in the people’s lives didn’t end and rather enhanced in peacetime. The close association and best performance made it the best companion for police forces, especially for areas like drug detection, searching and rescuing, detection of landmines, etc. They also offer a prominent role in therapy, performance, etc. Apart from it, physically challenged people, and people with special needs, get the assistance of these dogs, as they serve perfectly catering to their varied needs.

Top 5 Famous German Shepherd Dogs In The History Of Time

Well, we don’t just want to state historical facts but want it to be fun as well. Given below are all the first-facts about the history of German Shephards:

Rin Tin Tin is the most popular dog in the history of  German Shephards. Well-known for its remarkable performance in World War I, this dog was rescued by Duncan (US Army corporal), who took it to the USA.

In 4 years, Rin Tin Tin became the most renowned star in movies. This dog worked in about 27 movies from 1922 to 1931 besides owning its own “The Wonder Dog” show on the radio.

It lived a good life of 14 years and was finally buried in France. Even its progenies became great movie stars.

StrongHeart was police trained dog who was later taken to the USA by Lawrence Trimble, where it was re-trained for movies.

This incredible dog has also starred in 6 top films comprising of “White Fang.” It died of a tumor that was caused by an injury in the film studio in 1929.

This amazing female German Shephard trained in the USA is known to be the first seeing eye dog. With its help, Morris Frank finally felt independent. Being the first dog to bestow such kind gesture, this dog was bred further so that this ability can be passed on further to more service dogs.

This young dog Reno, of just 2 years showed bravery at its best while working with Des Moines Police Dept. The dog kept fighting even after 9 bullets went inside it. It then fought for its life and again returned back to its service.

This dog is behind the creation of the famous “Finn’s Law” in the UK. A suspect stabbed Finn with a knife while the police handler was trying to arrest the attacker. Although its wound got completely recovered, a new issue for the security of dogs in the service was invoked.

Thus, Finn’s law came into existence that safeguarded the animals working in the police force. According to this law, the people who attack such dogs should be punished with more stern sentences. It was considered as a way to protect such dogs from getting attacked or injured in any way.

Initially, developed for herding sheep to its current roles in the police force, healthcare, assistance to people with special needs, the German Shepherd breed has evolved wholesomely as a faithful, reliable, loyal, and lovable companion than being just a dog safeguarding the home. It has got a sort of personal touch in the lives of many people; in a way that they couldn’t resist but only come back for more love.