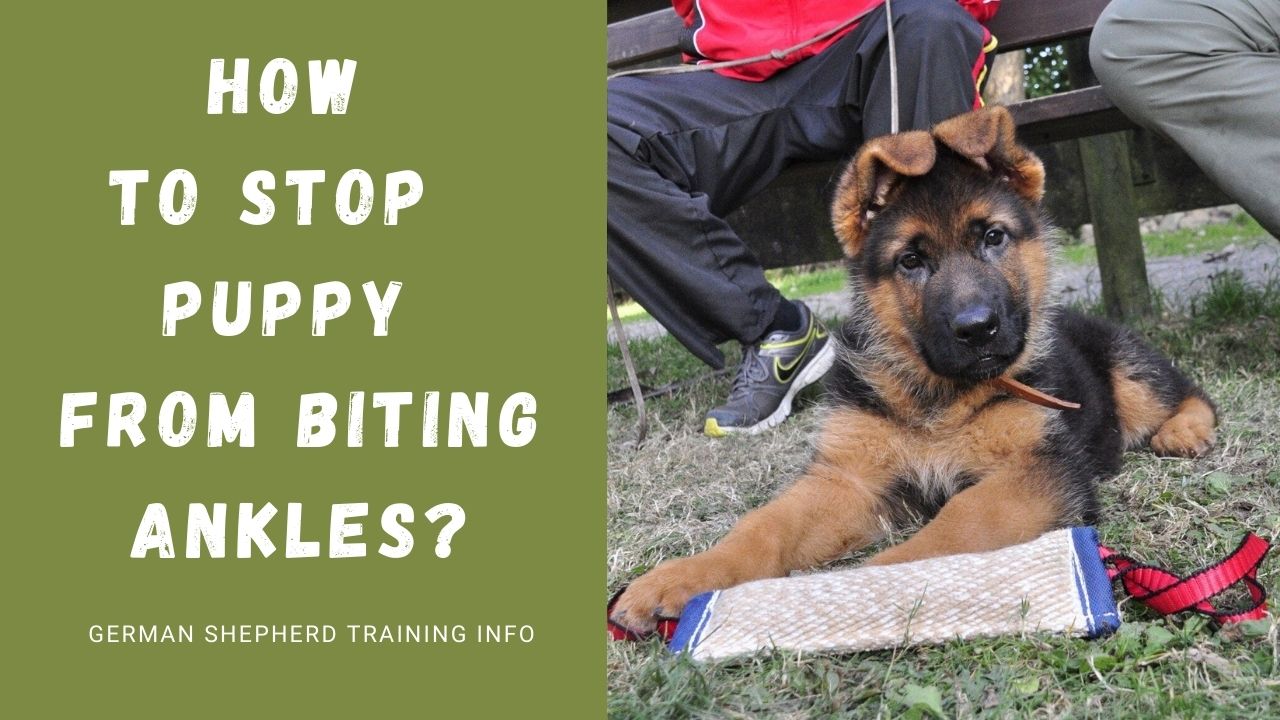 German shepherd Puppies are the cutest playthings that you can gift to anyone, or for that matter, even yourself. You might not even mind if a month-old pup digs deep into your ankles. At the most, it might give you a tingling sensation that will shoot right up to warm your heart with their loving yelps.

However, it will be wise to remember that their teeth are going to sharpen, and digging in deep can transform the yelp from their puppy mouth to a full-blown scream out of yours. Hence, it is best to go for behavior correction training before someone gets hurt.

Tips and tricks to stop the German Shepherd puppy biting

1. Finding out the root cause:

Ankle biting is common to almost all German shepherds and in fact, all dog breeds. However, there are multiple reasons why your dog might be engaging in ankle-biting.

German shepherds were raised as ‘herding dogs’ and thus over generations have had developed a primal instinct to bite ankles to keep the cattle from going astray. This rudimentary instinct is sometimes manifested with its human companions itself. The only solution to the problem is to provide proper training to the dog so that it may learn to stop biting its ankle.

Your puppy might be facing teething troubles. Other reasons might be that the dog is not getting enough exercise proportionate to its age. It might be a stunt to garner attention, especially if the puppy is already past the teething stage.

2. Let the dog know that biting is unacceptable:

The German shepherd, like any newborn, does not have an inherent understanding of what constitutes unacceptable behavior and what does not. However, a German Shepherd is an intelligent creature. It can make sense of our feelings by our verbal and facial expressions as well as our body language.

When your GSD pup bites you, you can walk away from the situation to express your displeasure. You can also give a sharp ‘No’ command and pull your dog’s collar away from you to distance him from you. While doing so, you should yourself be standing still. This will help the dog understand that his playtime with you will be reduced if he continues with similar behavior.

3. Redirect the behavior to a chew toy:

Sometimes, a pup bites everything in its sight, not because it is rebelling but because it is facing teething problems. When a pup’s teeth are about to erupt, his gums become swollen. Applying pressure on it provides temporary relief.

If your pup is going through the phase, you can first give a feisty ‘no’ command to it to stop it. You should then give him a chew toy that will help him ease some of the teething discomforts. You may also offer them frozen carrots to allay their teething woes.

However, it is important to ensure that your dog is indeed suffering from teething problems and not just displaying bad behavior. This is because, if it is the latter case, you will be rewarding his bad behavior with a chew toy.

You may also let out a small scream to make an appeal to the empathetic side of your German shepherd pup. It will make him realize that it is hurting you with such action.

If the aggressive biting still continues, you can also try a deterrent. These are objects which taste really bad. They thus act as a negative reinforcement by associating a bad memory with biting in the pup’s mind.

Sounds nasty? A little…let’s view it as a small, harmless revenge act if your dog does not respond to your cry for help. Or it might just be possible that it is a really bad piece of crying- acting from your side, and your dog is too smart a German Shepherd. In that case, we will like to complement you-well chosen!!

The importance of positive reinforcement while training a puppy cannot be emphasized enough. When your dog displays a good behavior, a small treat can go a long way in helping him understand the benefits of being in your good books.

For example, if your dog bites your ankle, display a body posture that shows that you are upset and are ignoring him. Fold your arms and turn around to face away from him. Keep repeating this until he stops biting. Then give him a big smile and a small treat to reward his behavior. This way, he will understand that biting will lead to you ignoring him, while not doing so will get him both attention and snacks.

6. Be a companion to your dog:

Sometimes puppies bite at your ankles because they are feeling lonely and want your attention. When you own a German shepherd, you own a responsibility to provide them with love and care for their lifetime.

It is important that you pay them adequate attention, especially in their formative years.

German shepherds who have not had proper training might have biting habits which they take right to their adulthood. It is thus important to focus on providing the right kind of training to your pup to turn into an amiable human companion.

If you have some time constraints, you should also crate train your dog, so that it is not emotionally hampered during your periods of separation.

You can also arrange for play dates with other trained dogs. Sometimes a dog is able to understand that it is biting rough while engaging in some canine-to-canine play.

7. Give him his daily quota of exercise:

German shepherds are highly energetic dogs who need an adequate amount of exercise. Lack of exercise can channelize their energies into destructive tendencies.

To know how much exercise your GSD pup needs, the golden rule is to add 5 minutes to each month of his age. For example, a two-month-old pup can manage with 10 minutes of exercise, while a four months old pup may need additional 10 minutes worth of exercise.

Things You Shouldn’t Do

Even you get your own list of don’ts; things you should never do while you train a German shepherd.

It is important never to shout or yell at your GSD pup as it will frighten him and make him nervous. It will also lead to him developing a negative perception of you and will damage your bond irreparably.

Also, as tempting as it may seem to some, never use aversive collars like, for example, a shock collar on your dog. It will frighten the dog and will have a negative effect on its mental health.

With adequate training, your GSD pup should stop ankle-biting as it turns five to six months old. If the aggressive behavior persists, you might need to consult an animal behavioral specialist. However, most of the German shepherd dogs have this issue resolved as they add adequate months to their age and if they have been adequately trained. To know more about training German shepherds, you can consult these 6 Best German shepherd training books.