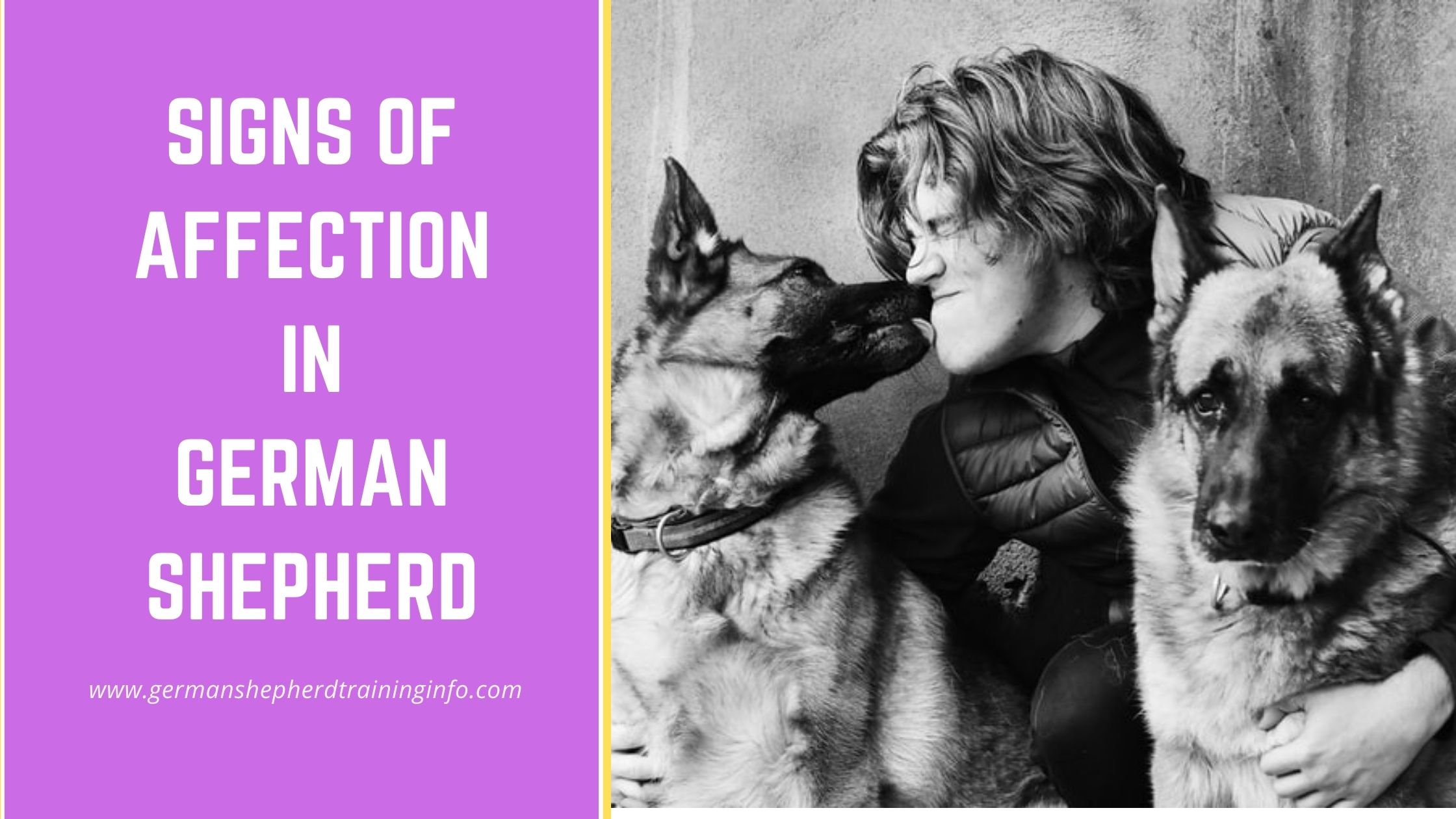 If you have a pet German Shepherd, this post will help solve your doubts regarding their affection. There is an ongoing misconception about German shepherds being just distant, cold, and fearsome in general. Some movies to be blamed for making that perception of German Shepherds in society.

Although it is somewhat true but not in all cases. American Kennel Club says that anyone who owns GSD knows that these dogs like to be around their owners 24×7. German Shepherds are an extremely cunning, brave, and loyal breed to keep as a pet.

The German Shepherd Dog Club of America points that pioneer breeders developed this breed keeping in mind the people’s needs. They wanted a robust breed that liked to stay among people but at the same time be aloof to strangers. German Shepherds love their owners and never think twice to show affection, but sometimes you might not recognize these patterns because they might be too subtle, or you might be unknown of their behavioral patterns.

The simple answer to this question is Yes! They are naturally loyal to their owners, but the amount of affection will indeed vary from one pet to another depending upon the environment they are in and several other factors.

German Shepherds are not very warm when it comes to strangers. They will try to protect your family when a stranger comes near their vicinity. Sometimes it becomes hard to notice their affection as they keep changing their love language or simply because you are not attuned with their nature. The below-mentioned list will help you understand your dog’s affection signs.

Following around is one of the most prominent signs of affection shown by GSD in general. If they admire you, they will follow you everywhere, even if you move from one room to another.

They essentially see you as a member of their pack and wish to be around you. If your pet follows you around a bit too much or doesn’t leave you even for a single second, then you might want to seek help from professionals as they might have separation anxiety.

#2 Bringing their most favorite toys:

If your pet GSD brings you their most prized possession, i.e., their toy, they admire you and think of you as their pack head. You are deemed a leader in their eyes, so they will try their best to please you.

Your dogs will bring their toys as a token of their trust, affection, and admiration towards you. Best thing to do is to encourage this behavior by accepting the toy so he knows he did a good job.

#3 They love to sleep near you:

Dogs who want to sleep next to humans usually want to show their affection towards their owners. As mentioned earlier, they think of you as a pack and want to do things with you together. They wish to protect you while you are sleeping.

You ought to be a little careful when sharing your bed as sometimes dogs might start thinking that they are the pack leaders. This can be particularly true among German Shepherds as they have a powerful personality and wish to lead the pack at any given moment.

#4 They may pee a little when they see you:

This peeing act is the most common instinctual response with puppies. Little puppies are scared of everyone and pee to show their submission. As they grow older, they start understanding people, potential threats, and their territories.

Thus, when big dogs pee a little, they are showing that you are the leader of the pack. This peeing means they respect you, and with respect, affection comes naturally.

Sometimes your German Shepherd is smiling at you when he/she exposes their teeth. Most dogs expose their teeth to show they are snarling, but if your dog is wagging his/her tail with exposing teeth, chances are they are smiling at you.

If your dog is licking their lip, has a relaxed body posture with ears sitting flatter against their head, you can surely say they are smiling. You will see this behavior more often when they are lying on their back. Make sure to give them lots of attention and cuddles when they are happy and smiling.

If your GSD ever leans on you, they like you a lot and want to stay close to you. They can lean on you even when they grow up to show that you are trustworthy.

Leaning is a major sign indicating that they feel entirely at ease with you. There will be a point where your grown-up GSD will do this at unexpected moments, but we know you wouldn’t mind that!

German Shepherds love rubs; they will always look forward to pleasure stimulating back and stomach rubs. If you are busy working away from them, they will make efforts to come to your desk and sit on your lap to get their well-deserving body rubs (Dogs really are smart!)They will even put their paws on your hands, demanding a rubbing session.

Fear not if your dog doesn’t initiate asking for rubs or run away when you try to pet them. Few dogs like being stroked and few simply don’t. Avoid stroking dogs who don’t like rubs, as forcing rubs will make them irritated and angry.

#8 They love to look you in the eyes:

According to a recent study led by Japanese researchers, Oxytocin is known as the ‘cuddle hormone, making you feel happy. When you both look at each other in the eye, the Oxytocin levels in your urine increase and your dog can easily smell this.

They feel better by making us feel happy and do it solely to give us joy. So when your German Shepherd looks in your eyes, they feel comfortable, and therefore your dog keeps doing it every time they want to make you feel happy.

Humans connect sighing with disappointment, but it’s different with German Shepherds or any other dog breed. When you notice that your GSD is sighing when they are near you, they feel very content.

You will see them sighing and grunting like this when you stroke them. Grunting and sighing is just a way of showing their affection to you as their owner.

#10 They often cuddle and snuggle:

Cuddling is the most visible sign of their affection if your puppy or dog comes and snuggles next to you. GSDs like being around you as you provide comfort to them. Bluecross.org states that dogs love to cuddle their owners, but the cuddling session should be totally on their terms.

Some dogs do not like to get hugged as it makes them physically impossible to maneuver. This feeling of restriction can panic dogs, and they will often run away from your embrace. A golden mantra: Cuddle your doggie on their terms!

#11 They check on you every once in a while:

Dogs that like to stay alone to maintain their distance often do this to show how much they adore you. It is their love language. If your dog comes into your room or wherever you are staying, just to look at you, they care about you. German Shepherds generally do this to ensure that their owners are safe and sound.

#12 They show empathy towards you:

If you are sad and feeling low, they instantly understand that. Your GSD might even come and sit on your lap to wipe away your tears with their tongue.

Comforting you during distress is their way of showing affection. Similarly, if you are happy, they will join and be glad to be a part of your happiness.

#13 They are happy when you come home:

Dogs, when excited, do not shy away from their feelings. They will jump and bark to their heart’s content just because their owner is home.GSDs will jump on top of you, lick you, bark loudly and try to play with you.

Jumping and excitedly licking you is another way of telling how much they love you. Brace yourself as their excitement is extremely contagious!

Sometimes, a German Shepherd wants to show affection; they roll over and expose their sensitive belly to you. When they do this, they are delighted and feel safe that you are near them. It would be best to treat your dogs by giving them belly rubs for being such a good kid.

Jumping is another classic sign that you wouldn’t miss. They will jump on top of you just because they are happy and want to be close to you as much as they can. Your face is precious to them and they love to see a smile on their owners’ face.

Are females more affectionate than a male?

The opinion is still divided among German Shepherd owners, but Kavellerie Shepherds breeder and kennel suggest getting a female dog if you want a docile GSD as your pet. However, you will find few male dogs caring as much as their opposite-sex counterparts. It also depends on individual dogs and the kind of training you give them from the beginning.

Will GSD bond with just one person?

They do tend to bond with other members, but many owners have found that the person in charge of their diet and exercise needs will receive more affection.

When emergencies arise, the GSD won’t spend a single minute picking favorites. They will try to protect your entire family in a heartbeat.

How can I make my German Shepherd love me more?

If your dog doesn’t have an intense bonding with you, try giving them some time to warm up towards you. You won’t form a bond overnight, have patience and take little steps; this will gradually increase your pet’s affection level.