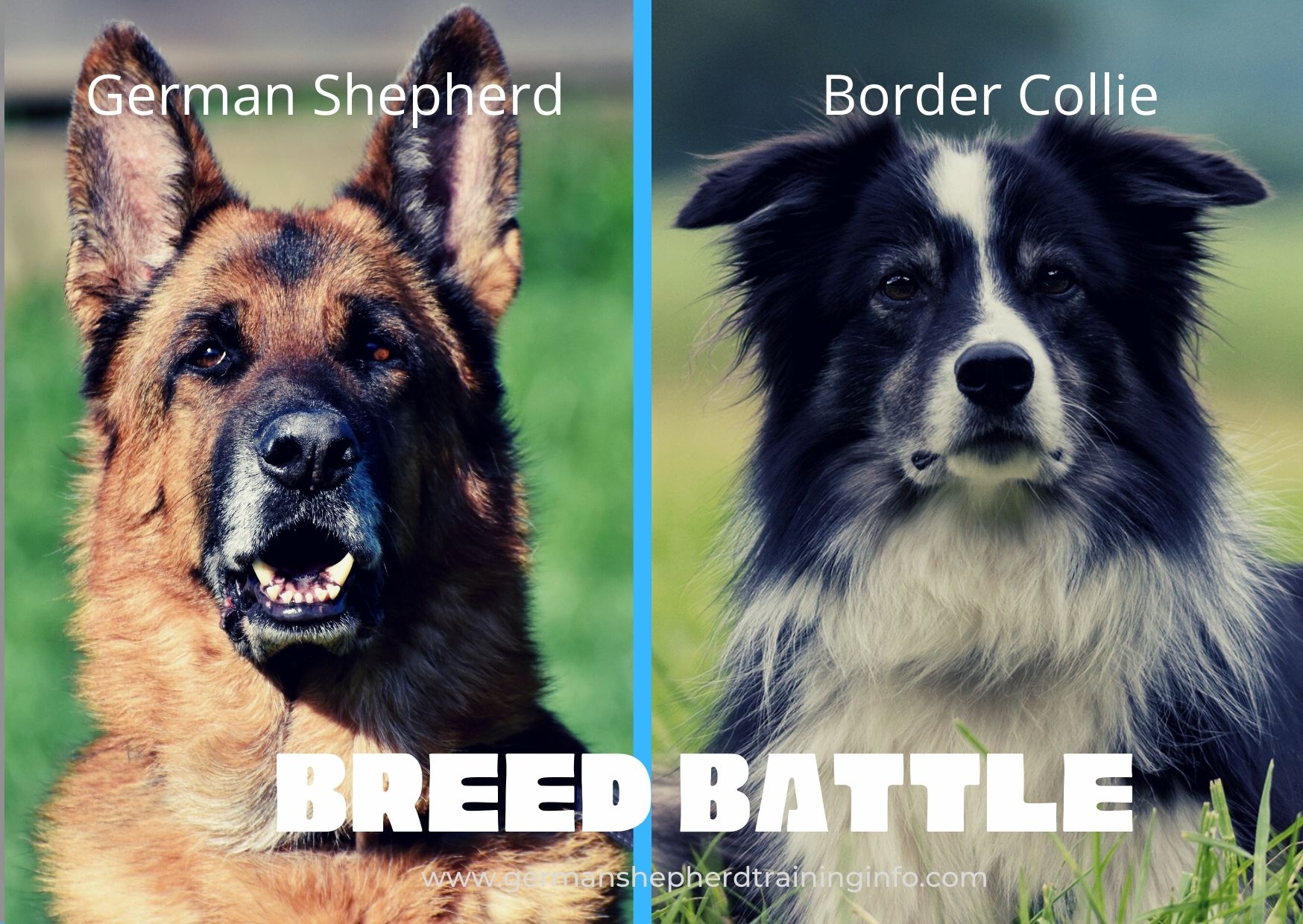 Both German shepherd and Border collie are top-notch dog breeds and selecting between the two is as hard as trying to find a needle in a haystack. Both these dogs have a rich breeding history and boast impressive lineage.

The German shepherd on the other hand traces its roots to the Germany of the late 1800s, with its creator believed to be Max Von Stephanitz. He was an ex-cavalry captain who was on the lookout for a perfect working dog breed.

To start the comparisons with a friendly reminder- both these are high maintenance dogs, meaning thereby that you really have to love these breeds to death if you are thinking of adopting them are first-time dog owners. Following are a few pointers:-

Both these dogs possess double coats. Border collie can have either a rough or smooth coat. Usually, the outer coat is rough and the inner is soft and can be present in multiple colors.

German shepherds mostly have long red\black or tan black coats. They are notorious for shedding hair, which occurs biannually mostly.

Border collies also go through periods of heavy shedding and their problem is aggravated because the hair they shed seems to stick everywhere because of their texture and may become more visible depending on the color.

Thus, both these dogs need a weekly comb through their coats and grooming is an area where you cannot afford to neglect them.

Both Border collie and German shepherds are extremely intelligent dogs and eager learners. This makes it easy to provide them with proper training as they are highly self-motivated. Both these dogs were bred as working dogs and thus have an innate hardworking gene ingrained in them.

Border collie, in fact, ranks number one in Stanley Coren’s ‘The Intelligence of Dogs’ ranking system.

3. The Training and Temperament

Border collies are highly energetic dogs and have a spirit of sportsmen in them. They are adept at agility training and are one of the most popular dogs in competitive obedience, sheepdog trials, fly ball, and herding events.

This makes them the best playmates if you have the stamina and energy to keep pace with them. While training, you might also need to provide positive reinforcements like snacks and treats to increase your Border collie’s learning pace.

German shepherds on the other hand are serious students. Because of their seemingly ferocious persona as well as being taller, they can be trained as excellent guardian dogs. They can be turned into an effective law enforcement machine and hence are often recruited in the military. They have an extreme eagerness to learn and require fewer treat breaks during their training.

Both these dogs require at least an hour of training daily. Anything less than this is bound to make them cranky and aggressive. This will in turn hamper both their physical and mental development.

Both these breeds need to be provided socialization training in their early formative stages.

Border collie dogs are especially shyer in front of strangers, however, are far less likely to bite them. Border collie also suffers more from separation anxiety on staying apart from their owners for longer durations.

German shepherd, on the other hand, is slightly more accepting of strangers, even though they are highly territorial. Thus, they require more training if there are other pets in the house so that the GSD is able to familiarize himself with them. A Border collie is more accepting of the situation in a multi pet-household.
Both these dogs are children friendly.

However, eventually, it boils down to whether the dogs have been given proper socialization training or not.

Both of these dogs are highly energetic dogs. Consequently, they have high nutrition requirements. Their food bill is another cost you may have to factor in their maintenance. However, an average Border collie is likely to eat less than a German shepherd.

Here our German shepherd takes an easy lead. According to American Kennel Club, as of 2020, German shepherd is the third most popular dog breed. Border collie is placed at the 32nd position.

No need for Border collie fans to lose heart. Rin Tin Tin German shepherd may be the most famous dog in motion pictures, but history will always remember Jean, a Border collie, as the first canine movie star.

READ :   German Shepherd vs Swiss Shepherd: Which breed suits you?

However, because of their immense popularity, German shepherds are priced at a slightly higher rate. You may have to cough up a whopping $1000 to $2000 for a purebred from an ethical breeder. On the other hand, Border collie can whip out anything above $1,000 from your bank accounts too. However, they will generally cost less than a German shepherd.

Border collie can be longer life companions with an average life span of 12 to 15 years. German shepherds, on the other hand, have a few years lesser to live than a Border collie on average. However, every day with these lovable pets is a blessing and we wouldn’t want you to worry too much about these things.

Both German shepherd and Border collie are dogs for individuals and families who have the time and energy to keep up with these energy balls of fire. They also are extremely intelligent dogs. Picking between the two dogs can be basically narrowed down to your primary motive behind buying the dogs.

If you are in just to get a loving companion to play brainy games with, a Border collie is the dog for you. We meant the sport-brainy type…although Betsy, a Border collie was known to have a vocabulary of 300 words…so maybe you can give scrabble a try!

If you are more concerned about your security and protection, a German shepherd will probably be a better choice. After all, even the most powerful man in the world, the current US President, brought his two German shepherds Champ and Major to the White House, so that he could sleep safely in his bed.