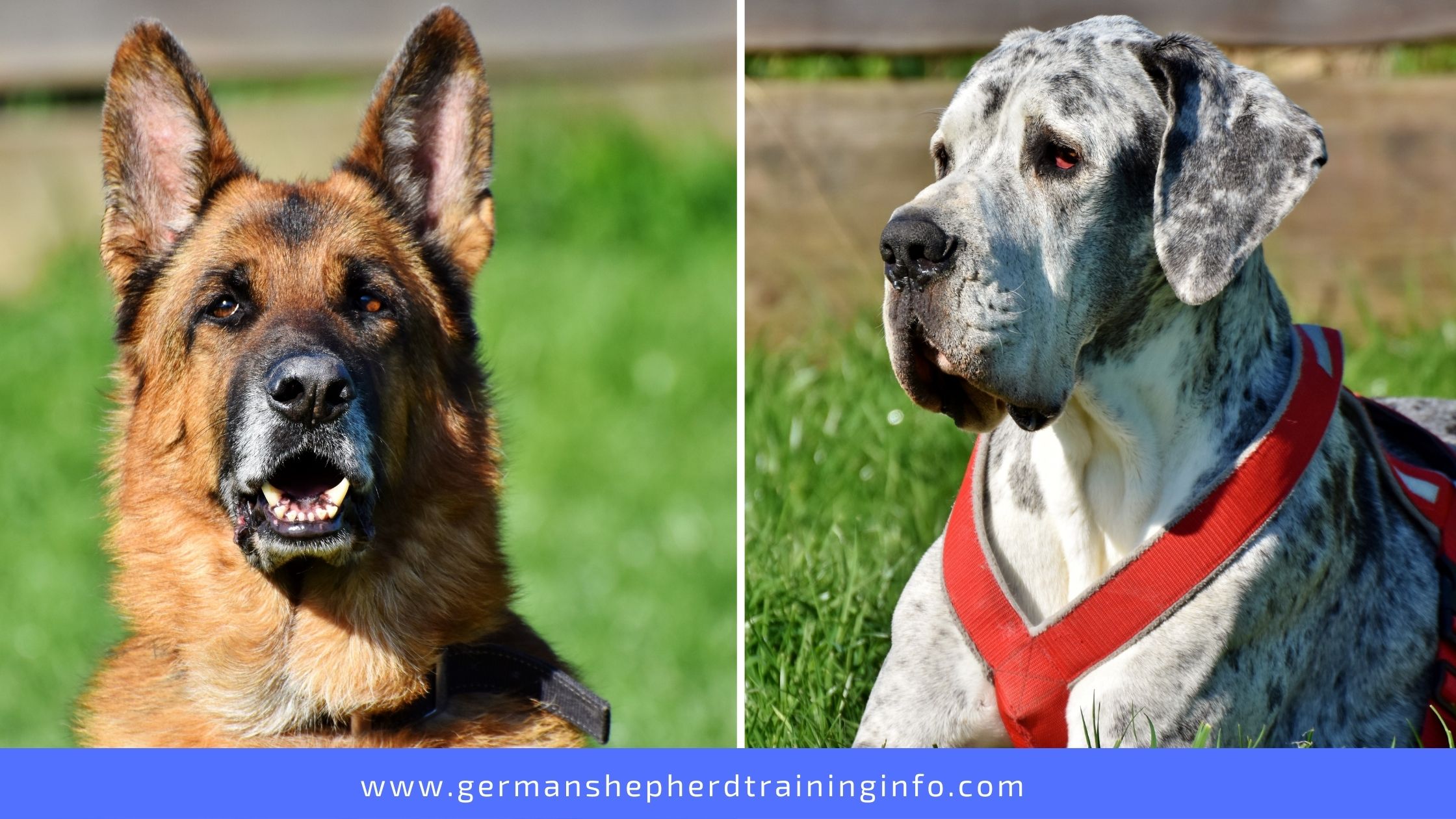 German shepherds and Great Dane, both trace their roots to Germany. In fact, Great Dane is also known as the German Mastiff. However, the different time periods of their origin adds diversity to the existence of both these species.

The German shepherd is a modern-day breed that traces its origin to around the late 1800s. In canine years, he is just the new kid around the block.

To give you a little background check, German Shepherds were mostly bred as herding dogs to rear sheep. But they ended up impressing everyone around them with their strength and intelligence. They were quickly promoted to search and relief operations and in military service.

The Great Dane, on the other hand, has its life story somewhat in reverse. It gets its greatness probably from being the royal hound. Their history dates back to the sixteenth century when they were used as hunting dogs in royal expeditions.

Somewhere down the line, the Royalty grew too fond of it and began domesticating it so that they could be chamber companions to the beautiful royal princess of that era. Their German name is Kammerhunde, which roughly translates into ‘Chamber dog’. They were then bred to be less muscular so that they could adapt to a domesticated environment. Some of them were even adorned with jewels. Whether they were lovingly spoiled with these adornments or were, well… just spoiled, is a judgment we leave to your perspective.

The end of this story, however, got us a large and loving domesticated dog. So, we qualify it as our very own canine fairytale.

If you are a dog lover who is looking for a new pet (and by ‘new’ we are trying to give you a subtle hint that both these dogs are high maintenance breeds that, unless you are confident of your canine handling skills, should not be seen as a first pet choice), here are a few pointers to help you decide which of these two German descendants to welcome in your adobe:

Both of them are large dogs who require ample space  To live.

Your average German shepherd is 60 to 77 pounds heavy with an average height of 23 to 25 inches. This implies that it needs an adequate amount of space to flex its muscles. Trying to figure out the mathematics of the dimensions of your room? Well, hold your breath for just a second.

The Great Dane is a whopping 115 to 160 pounds average heavy. It has a height average of 30 to 32 inches. You will probably need a backyard in your home for it to roam around at ease.

This largely boils down to your pick between the drool and the dog hair.

The German shepherd wears a double coat with a hairy layer on its outer coat. It thus keeps shedding hair all around it and you probably have to brush it every day.

The Great Dane, on the other hand, has a short shiny coat in colors that range from fawn, brindle, black to harlequin. Since their coat is short, they shed less hair and require minimal grooming in this respect. You move a brush around their coat once a weak and you are good to go.

Before the lazy Joe in you leaps out in joy, we have to confess that we are holding back some information at this point. The Great Dane, we regret to inform you, is a drool factory that will cover you in its saliva every now and then, but of course, with affection. If this is something you can live with, this dog is one giant heart beating with love.

The German shepherd is truly German when it comes to discipline, stamina, and an energetic zeal. If you keep a German shepherd as a pet, there will be a lot of running around and keeping pace with involved. It requires at least an hour of exercise daily.

The Great Dane, on the other hand, is an easy-on-calories, playful companion. While full of energy itself, it does like an occasional nap now and then. It also has a higher calorie intake than the German shepherd. Thus the food bill you have to foot for it will also tend to be slightly more.

German shepherd here takes a lead as a perfect dog and serious student for training purposes. It is an intelligent breed that is eager to learn and tries to fulfill its master’s entire command with perfection.

Great Dane, although a quick-witted dog itself, still likes to chill out once in a while and may wish to sometimes bunk a training session.

To put it more astutely, your German shepherd is the teacher’s favorite front bench student who is the first to shoot his hand up to answer a question. Your Great Dane, on the other hand, is the relaxed middle bencher who cracks up a joke on the teacher once in a while, but still manages to get straight A’s.

German Shepherds are fiercely protective of their owners and can regard newcomers as a threat very easily. They thus have to be taught at an early age that all outsiders are not enemies. Their need for social interaction is also comparatively limited. The German Shepherds are thus considered an ideal companion for the elderly.

The Great Dane on the other hand is a social breed that warms up to strangers more easily and is less aggressive to new elements in the household. They are also less likely to bite a stranger.

German Shepherds are most prone to hip dysplasia, which is a defect arising out of selective breeding. The Great Dane, on the other hand, mostly suffers from bloating, which occurs due to the accumulation of gas and may cause the stomach to rotate.

Both dog breeds have an average lifespan of 7 to 10 years, which means they will probably see through your nervous adolescence years of high school, but wouldn’t be able to catch the hat at your graduation.

Both German shepherd and Great Dane are an excellent choice for a pet if your house needs to add a vibrant energy to its aura. They work better than any anti depressant to charge you up and make you take stock of your self and your surroundings. This is because they are not a go- to-mall to get a dog\place a packet of dog cookie and forget-about-it-kind of dogs. They get involved in every aspect of your life and expect you to return the favour. Thus, both these dogs are a full time commitment, but let us assure you,totally worth it!!

To sum it up, if you are looking for a pet dog for security purposes, a German shepherd is a clear winner. However, if you a canine lover who wants a dog that will be willing to play catch-the-bone on a sporty Saturday as well as slumber in front of the television on a lazy Sunday, Great Dane is a great pick.