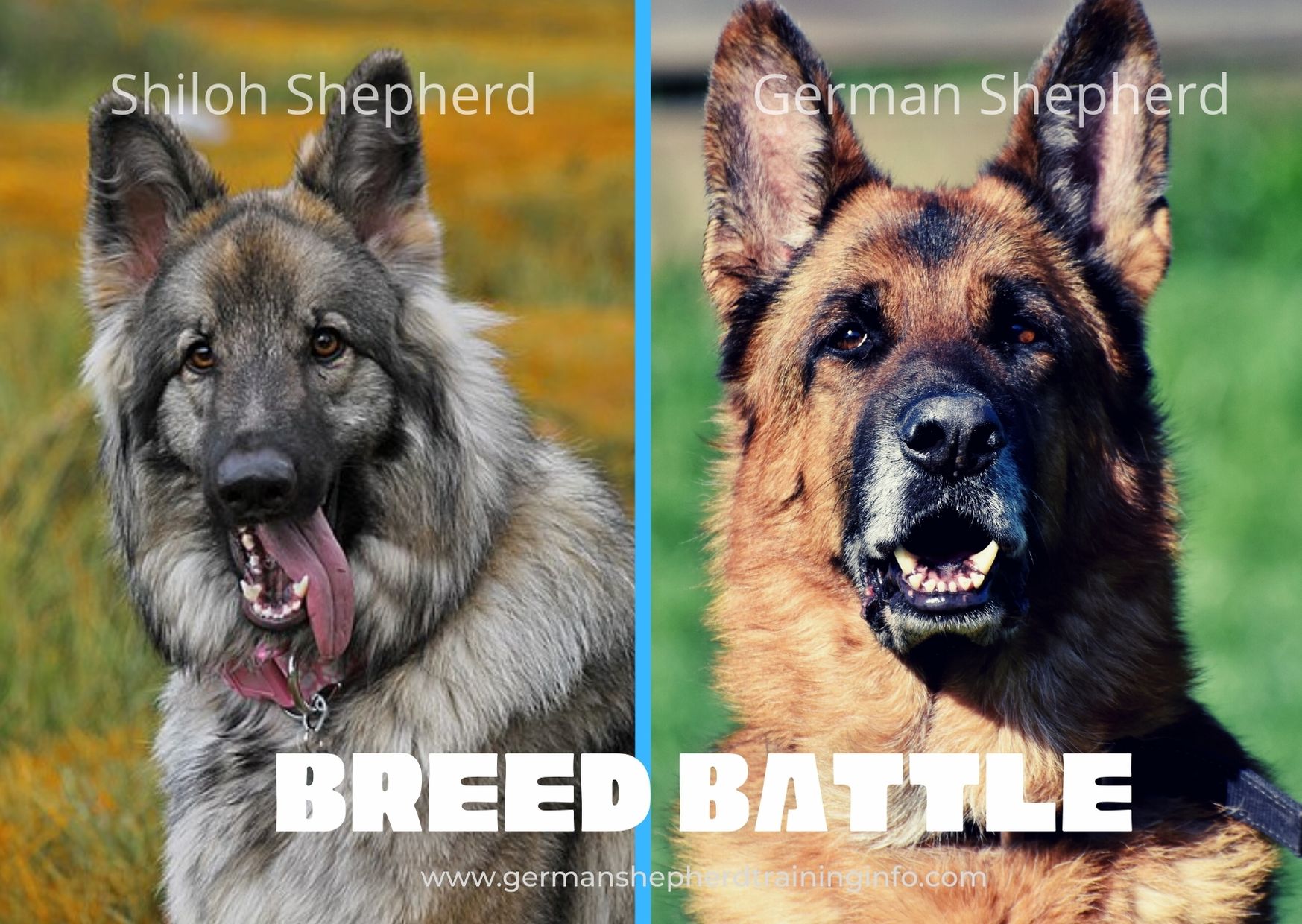 The German shepherd, Dutch shepherd, and the Shiloh shepherd hold a special place in every dog lover’s heart. Besides their materialistic characteristics, it is their athleticism that makes them good work dogs. However, German Shepherds and Shiloh Shepherds take the cake for being better predisposed to settling in your home. These two are family-friendly dogs; comparing both of them is quite a task.

If you’re planning to induct a new family member, you’ll want to weigh all the options available to you. Dog lovers do have their biases: German shepherds have had consistently high popularity ratings amongst pet parents over the years. Despite their misconstrued reputation of aggression and restlessness, the German Shepherd is a reliable and loyal breed. On the other hand, the Shiloh Shepherd, a product of selective breeding from German Shepherds, is claimed to be a definite upgrade over German Shepherds.

To understand the differences of both these breeds, it’s important to first delve into their history and genetic constitution.

Towards the end of the 19th century in Germany, an ex-cavalry officer, Max von Stephanitz, cross-bred working sheepdogs in rural Germany, aiming to create a working herd-dog that could walk for long periods. The result was entirely different from the German Shepherds as we know them today, with a rough coat, short tail and looking quite like wolves or mongrels. Over the centuries, the breed continued to be refined to make for the handsome dog we all are familiar with.

However, retaining the qualities of a high-end authentic GSD through years of in-breeding came with a heavy cost; the breed continues to grapple with sloping back and hip dysplasia amongst other genetic physiological anomalies. There were also concerns that dog owners could not really manage their temperament.

In the mid-1970s, Tina Barber, a German Shepherd dog trainer in New York, acknowledged these issues with German Shepherds. Aiming to breed for a docile, calmer, more family-friendly behaviour instead of the GSD’s working temperament, she created the Shiloh Shepherd.  It has a German Shepherd foundation stock, mixed with the bloodlines of Alaskan Malamute, Canadian White Shepherd and a Czech Wolf Dog, perfected over 40 years of development for stronger hips and a healthy frame.

These cherry-picked qualities have helped to guarantee resilient and healthy Shilohs. However, experts opine that the limited genetic diversity in the course of breeding Shilohs could in fact lead to other health concerns, specifically auto-immune diseases.

German shepherds are medium to large-sized dogs, standing tall at around 24-26 inches (male) or 22-24 inches (female) at the shoulder. These heavyset dogs weigh between 65-90 pounds (males) and 50-70 pounds (females). Shilohs are bred to be significantly larger than GSDs of the same sex; as per breed standards, an ideal male Shiloh should measure 28-30 inches at the shoulder and weigh 100-130 pounds; females should be 26-28 inches in height and 80-100 pounds in weight.

Both the GSD and Shiloh shepherd have a scissor bite, with quite a strong jaw grip.

Both the GSD and Shiloh have triangular, pointy ears; the triangular shape is smaller in the case of Shilohs, with a less pronounced square head as compared to the wedge-shaped head of the GSD, making it look more “wolfy” in appearance. Shilohs are not as oblong in the body as GSDs.

The gait is an important attribute in both breeds. GSDs are meant to be athletic, with a trotting gait. On the other hand, the Shiloh Shepherd’s gait is a ground-covering, extended, suspended trot.

German shepherds have a dense double coat, coloured tan/black or red/black, that keeps them warm in most cold conditions. Shilohs have a thick, harsh double coat, with two acceptable varieties, smooth and plush.

While the long “plush” coat is popular amongst Shilohs, German shepherds with long coat do exist but is not a standard attribute. Shiloh Shepherd coat colors are varied, including black/tan, golden tan, reddish tan, silver, cream.

Both breeds tend to shed a lot, because of their double coat. They both generally have two annual “blow-outs”, where they shed a heavy amount of hair all at once. However, in general, GSDs shed more than Shilohs, so you may need to clean up more frequently.

The grooming requirement for GSDs is higher; you need to groom their coat pretty frequently, since the matting of their thick double coat may cause their body to overheat. On the other hand, Shilohs are low maintenance.

GSDs are self-assured and they love to please their masters. They display a good degree of Loyalty and obedience. They are pretty intelligent and have a natural curiosity, which makes it easy to train them. This makes them excellent service or search/rescue dogs. GSDs can display wariness & suspicion of strangers and have been known to be aggressive. However, this emerges as a side-effect of poor socializing skills in the early years of training.

The Shiloh Shepherd was selectively bred to display docility, mild and gentle temperament but with high intelligence. Despite its relatively huge size, as compared to the GSD, it’s a perfect family dog, a powerful but devoted companion. While it is not recognized under the AKC, Shiloh Shepherds do have their own standards that describe them as courageous and self-confident. Shilohs are noticeably calmer and easier to handle than most working shepherd breeds, including German shepherds. They are intelligent but require early socialisation and consistent training.

One word of caution: as a dog owner, please keep in mind that Shilohs do originate from herding and guardian roots. They still get bored quickly and dislike isolation. Don’t be surprised if your Shiloh starts yapping and barking and destroying things.

READ :   How Do Police Train Their German Shepherds: A few insider notes on the K9

You should expect a quietly confident giant with less of the health issues associated with a German Shepherd. They show the least territorial tendency amongst all the Shepherd breeds.

The German Shepherd is a versatile working dog with a high energy drive. Because of this attribute, you would have a hard time restraining your pawed pal. You may need to give him plenty of activities, toys and treats to keep him productively engaged. They can display hyperactive tendencies, especially if not exercised enough, or if they’re bored or have separation anxiety.

Shiloh Shepherds retain some traits of their German sires and dams, including the same high energy and drive, making a few individuals capable of doing demanding tasks such as Search and Rescue work. Their herding foundation gives them an energy drive to hike up mountains and the partner capability in an agility ring. However, do note that the Shiloh was not bred as a “working” breed; thus, calmer, social, amiable behavioural traits are expected. Their “softer” temperament vis-à-vis German shepherds make them easy-going and less likely to be a training challenge for their human partners.

A healthy dog is a happy dog. As an informed and responsible dog parent, you must get your pooch checked up for any ailments at the vet regularly. Look out for some specific conditions that may be plaguing your precious bud. GSDs are particularly prone to skeletal disorders such as canine hip dysplasia, Cauda equina syndrome, and arthritis. This is chiefly a result of genetic flaws passed down in the bloodline through inbreeding—a peril of purebred pooches. Apart from that, GSDs are predisposed to suffer from nerve degeneracy, Von Willebrand disease, and pancreas degeneration. Because of this, your GSD may need to make more frequent trips to the vet.

Hip Dysplasia is prevalent in most German Shepherd progenies such as Shiloh Shepherds, weakening their hips and causing arthritis in dogs. Shilohs are not immune to this; however, they were bred using a special program that helps them strengthen their hip bones. In large dog breeds like Shiloh shepherd, Gastric Torsion or Bloat is common and may be fatal. Amongst other disorders, Degenerative myelopathy, Exocrine pancreatic insufficiency, Ventricular arrhythmias and Panosteitis are seen. Despite these health concerns, Shilohs are relatively healthier.

Both the German shepherd and the Shiloh Shepherd are extremely fun, loyal and admirable dogs to have in your family. You can be assured of a really active and playful time while training or exercising them.

German Shepherds or Shilohs, both tend to be heavier breeds, thus you need to be careful not to overexert them, lest they happen to develop skeletal deformities, as such dogs are prone to have.

On one side, you have GSDs, that fare particularly well for new pet owners. Resources and specialist vets are available to help you take care of them; but their overall health is significantly poor, if not looked after properly.

On the other hand, Shilohs have successfully managed to push out these health-related disorders from their bloodline. Furrier, healthier and an intelligent companion with a calm demeanour, this gentle giant is your go-to breed. In more ways than one, Shilohs have the potential to win this breed battle!

Whatever be your personal preference—an active, stylish GSD or a smart, sweet and softie Shiloh, both breeds will be your faithful comrades.