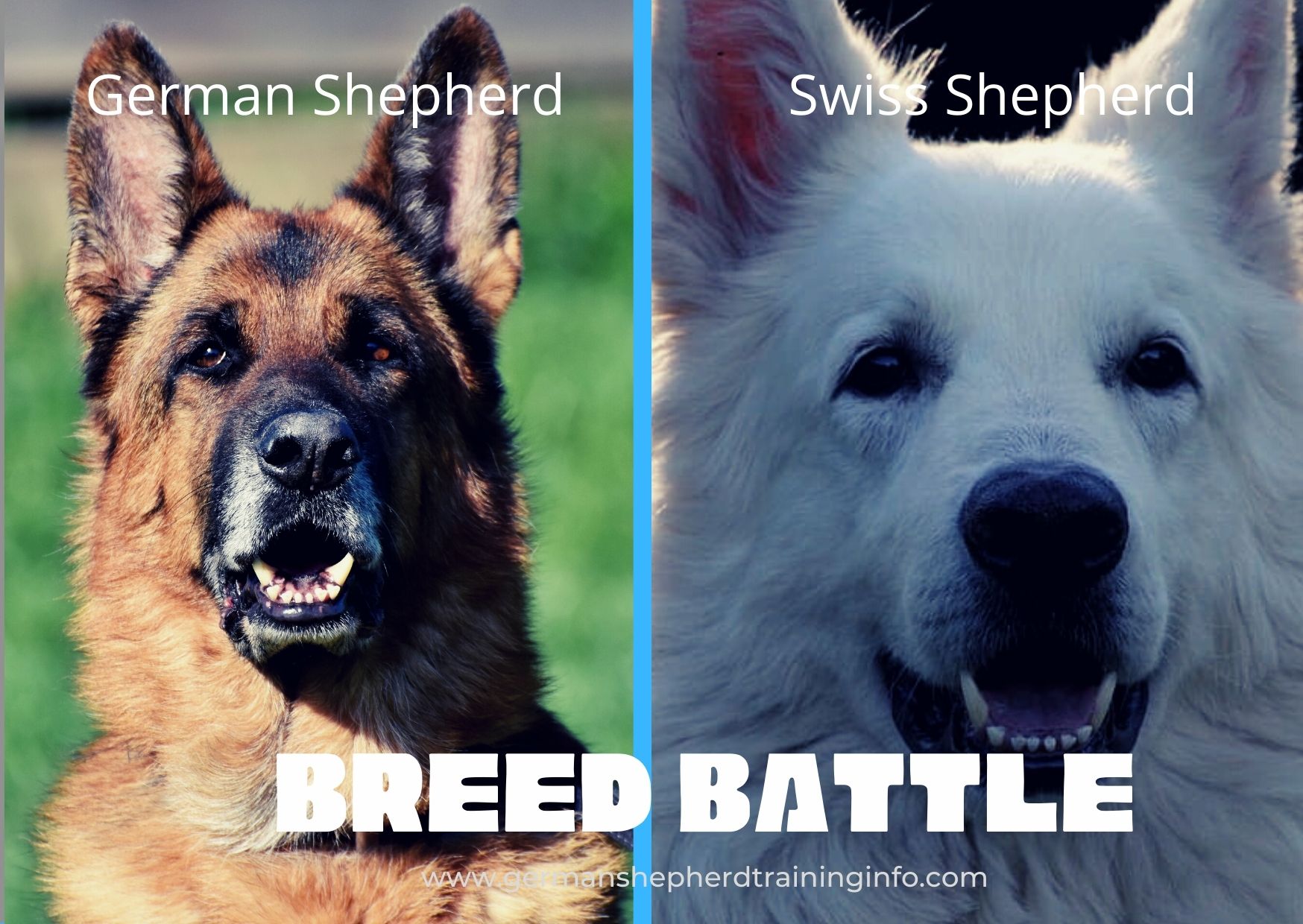 Are you wondering which Shepherd pet would be the best companion for you? The two dog breeds German Shepherd and Swiss Shepherd are extremely gorgeous appealing! Considering which one is perfect for you, it’s essential to understand the difference between the two. Swiss shepherd and German shepherd both make a good family dog. But what makes them similar and different from each other?

You will come across certain dissimilarities similarities between the two breeds. However, it will help you choose which one is best suitable for you.

The differences are not too noticeable between the two breeds as they both belong to the shepherd background. But we’ve sorted them out easily for you-

Origin of both breeds

To begin with the origin, the German shepherds came from Germany in the late 1800s. This breed was supposed to be on the team of working dogs as they are incredibly protective and intelligent.

Their courage, sense of smell, and speed make them the best sheepherders. Surprisingly they are the 8th most popular dog in the UK and second most popular in the US.

Another one, the Swiss shepherd is a stunning looking dog, also known as Berger blanc Suiss. Interestingly, this came out from the original German shepherd white coat lining dog, bred in Switzerland. These only come in white color while German shepherd has a variety of colors.

It looked albino, although it’s a white variant of German shepherd due to a recessive gene. There was a white shepherd club in 1964 in the US to protect white-coated German shepherds. That was the beginning of Swiss shepherd popularity!

What’s similar in both breeds?

We know that Swiss shepherds are not too different from German shepherds. They have almost similar characteristics and appearances.

Talking about characteristics, the breeds are easy to train and intelligent. The breed can be timid or clingy at times, depending on how they have been treated. Their behavior is playful and lovely for their owners. However, make sure not to leave them alone for too long as they can develop destructive behavior.

Both breeds like to exercise as they are highly active. So if you are one of the morning people who go jogging, you will appreciate both the breeds! Now let’s dig deeper into how different they are in other aspects.

How do they differ in appearance?

Talking about appearance, color is the most significant difference. Swiss Shepherds are always white with dense hair, while German Shepherd has a fuzzy coat of fur.

The reason why Swiss Shepherd has a thick, dense coat is that they are more prone to living in a cold climate, and might not handle heat as good as GSD.

How do they differ in health?

Coming to health, Swift Shepherds are more sensitive and vulnerable compared to German Shepherds. They can catch numerous health issues which without treatment, could be fatal. It would help if you took them to the vet for regular checkups to ensure they are healthy.

Here are the most common diseases a Swiss Shepherd can catch-

Considering German shepherds, both are at risk of certain diseases like hip and elbow dysplasia, and degenerative myelopathy. Typically German shepherds are healthy but should be regularly checked for any sickness.

Both breeds, as they belong to the shepherd category, are prone to diseases, mainly hip dysplasia. It’s always better to have them checked regularly to be sure they are still healthy.

How do they differ in characteristics?

Although the two breeds come from the same line of generation, their characteristics differ a lot. Both breeds are easy to train and highly intelligent. The significant difference is German shepherds are best for military or guard dogs services, whereas Swiss Shepherds are best suitable for therapy dogs.

Although German shepherds are primarily loyal to the owner and family, they can turn around to be aggressive for strangers. They need to have constant social interactions to be ok with strangers from a young age.

They also come with a tendency to bite strangers in uncomfortable situations. They feel best as lone wolves who can only adjust and feel comfortable with the people they know.

If you want a sweet dog who can be your ideal companion, someone who is best as your farm dog, a Swiss Shepherd would be a better choice. These are not intense at all and kinder to people. Breeding this dog requires a lower drive as they are gentle and calm.

They love social interaction and thrive on affection from people, unlike GSD. Also, this breed has a better and positive tendency to roam or wander during walks for a long time compared to GSD. GSD does not possess this tendency. They always want to chase and catch other smaller beings.

Behavior and Temperament of Both Breeds

Swiss Shepherd- Swiss shepherds have happy temperaments and are best suitable for families. They are eager to learn, and friendly which makes them perfect companions as a family pet. They do great with youngsters’ kids and are also watchful for the house.

Everyone appreciates less aggressive and gentle behavior. They do not have a high working drive and are less intense. The breed can do hard work; however, it’s best suited as an all-purpose family dog.

They are lovely to people and hence also work as therapy dogs. Even being one of the shepherds, they can’t perform well in the military or police department because of their calm nature.

They should be kept active and exercised all the time as they love playing. Not doing physical activity can stress them as they need to release the destructive energy.

German shepherd- On the contrary, German shepherds are much easier to train as they are always eager to please. With proper discipline at a young age, they can turn out to be a well-trained adult.

But if you are looking for a watchdog for your house, you should go for this protective companion. They love keeping the guard because they are good at it. They can act aggressively or get nervous around strangers depending on human behavior. However, it’s just because they want to protect their family and they work on their natural guarding instincts.

They need physical exercise every day like walks or hikes, to stay fit.

Pricing of Both Breeds

The similarities and differences are negligible in both breeds. Firstly both breeds are easy to train, family-friendly, and look almost similar other than the color difference. However, it all comes down to what you want in your pet.

Go for swiss shepherd if you-

Go for German shepherd if you-