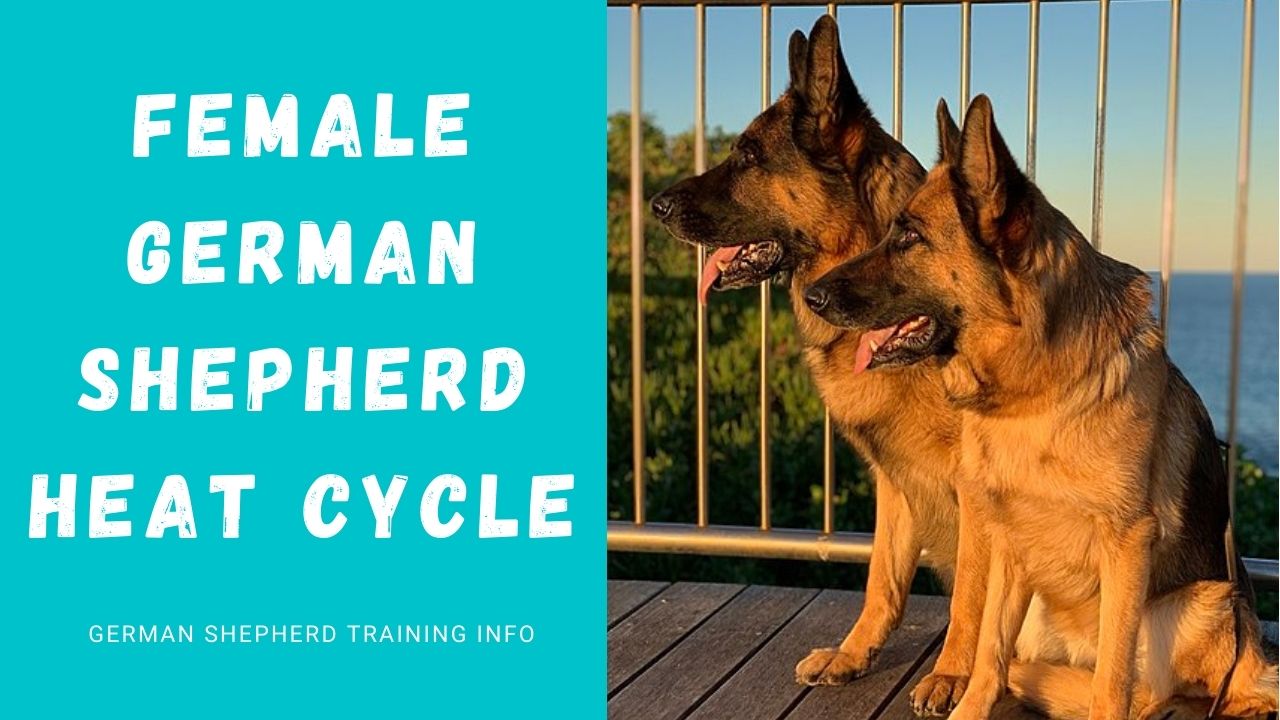 Here is an opening sentence for you: Female German shepherds go through their ‘heat’ cycles, the time when they are at their fertile best.

Not to sound sexist, but our female readers have probably clued into the situation already. A mini synopsis for our male readers might help them get a better hang of things.

All-female dogs go through their heat cycles which signal their march into a reproductive stage of their life. It varies from breed to breed as to when the heat cycles start.

Six months to nine months is usually the period when female German Shepherds as well as other large breeds enter their dog puberty. However, it can also be extended to over a year.

Some of the smaller breeds might get their first heat cycle in four months only.

Four stages of the Heat Cycle

We will broadly dumb down the four stages for you without getting into technical jargon and those huge biology terminologies that are both difficult to read and spell.

The four stages of the GSD heat cycle are:

This is the on average 9 days ‘Touch-me-not’ phase of your female GSD’s heat cycle. Her vulva also starts to swell. However, the suitors in form of male GSD have already started storming the doorsteps as the scent of her pheromones and blood-filled vaginal discharge fills the air. Romantic you say? Ah well…

This period lasts from 4 to 21 days and is the mating phase in a Female German Shepherd’s life. Note that the male GSD is sexually active throughout the year.

READ :   Different Types of Shepherd Dogs You Should be Aware of

The eggs are released from the ovary. However, mating should not be encouraged in the females’ first and second Heat cycles because the eggs are still immature then.

If mating occurs, the female enters her pregnancy in this stage. However, a female GSD may also show signs of false pregnancy which is also called phantom pregnancy. This phase can last up to 63 days.

If mating does not occur, the female German shepherd enters the Anestrus phase. Here the vulval swelling starts subsiding and she is no longer available for mating. The period usually lasts for six months.

Thus, on average, the female German shepherd can get her Heat cycles twice a year, six months apart. However, the duration may be much longer.

The female is most likely to remain in her Heat cycle for a period of two to four weeks. There, we have finally answered your question and cleared your itsy-bitsy doubts on the way.

However, a disclaimer is in order here. Heat cycles, just like human female menses, are highly individualized to each female German Shepherd. Thus it may start earlier or later, stay longer or shorter, and maybe fairly regular or highly irregular.

By her fourth or fifth cycle, you might be able to form a mental sketch of your German Shepherd’s heat cycles. However, you are in for a disappointment if you expect it works like a Swiss clock.

The estrogen levels in the female dog’s body rise during this period and then quickly drop. This acts as a signal for the body to release eggs from the ovaries.

It also ends up in mixing up the body metabolism of the female dog and shoots out signals for us dog owners to catch that she is in heat. Some of these red flags are:

Frequent urination: A female GSD during this phase frequently urinates. The scent of this blood spiked urine sends a signal to the males in the area that a female is ready to mate. More on that later.

Vulval swelling: The female vulva also develops swelling and the female dog often tries to rub her behind to the furniture present around the house. She also displays a ‘flagging behavior’. This means that she often lifts her tail and flashes her swollen vulva to send signals to a potential partner.

Loss of appetite: Some female GSD’s also experience loss of appetite during this phase. You can encourage them to eat more by feeding them their favorite treats or make up for the weight loss later. Remember they might be experiencing behavioral changes and might not be their Christian best.

Behavioral changes: This brings us to our current point. Due to fluctuating hormonal levels, the female dog may be slightly irritable or visibly more aggressive. They may also experience a loss of energy and feel lazy. Your best move at this stage is to show empathy to her and shower her with love and affection.

Taking care of your German Shepherd while she is in heat

Remember the 3S here-Show, Save and Stop.

As mentioned above, it is very important to understand that it is not bad behavior or lack of training that is making her act a certain way. It is a force majeure, beyond her control. At this time, she needs your full emotional support and affection. Some female German Shepherds’ are alarmed by their first Heat cycle.

You need to distract them with their favorite toys and snacks. An emotional bond formed at this moment can sustain a lifetime.

You really don’t have to worry about cleaning your German Shepherd as these dogs lick themselves clean and are particularly inclined towards their personal hygiene. However, the same level of commitment is not shown towards their surroundings and your furniture.

You have to be extremely cautious to avoid bloodstains on your favorite couch or even worse, it ending up getting chewed by your agitated GSD.

You might want to put them in dog diapers. You can also confine them to a specific room with more acceptable flooring. Confining them in a crate with absorbable clothing is also one way to be. However, it is extremely important to clean after them during these days, unless you want to wear a gas mask for four weeks to survive the stench.

Stop your GSD from mixing with other dogs

During their heat cycles, female GSDs can get in trouble with other intact female GSDs. This is because they are prone to show excessive aggression during this period. It is best to stop your German Shepherd from mixing with other female dogs at the moment.

On the questions of male dogs, unless you want a bucket of German Shepherd pups, you need to keep male GSDs away from your girl as well. This is easier said than done. You cannot imagine the extent to which males will go if they sniff out a female who is ready to mate. So lock that door and take your dog out on a walk only in the wee hours of the morning, when the possibility of a lurking male German Shepherd is less.

And they say females go crazy on their heat cycle!!

Heat Cycles are a natural process for a female German shepherd and not something to be worried about. However, it is good to be prepared for the inevitability if you have adopted a female GSD (Unless you have got her spayed).To know more about whether you are a male German Shepherd person or are more suited for a female GSD partner,  read our article on the differences between them.