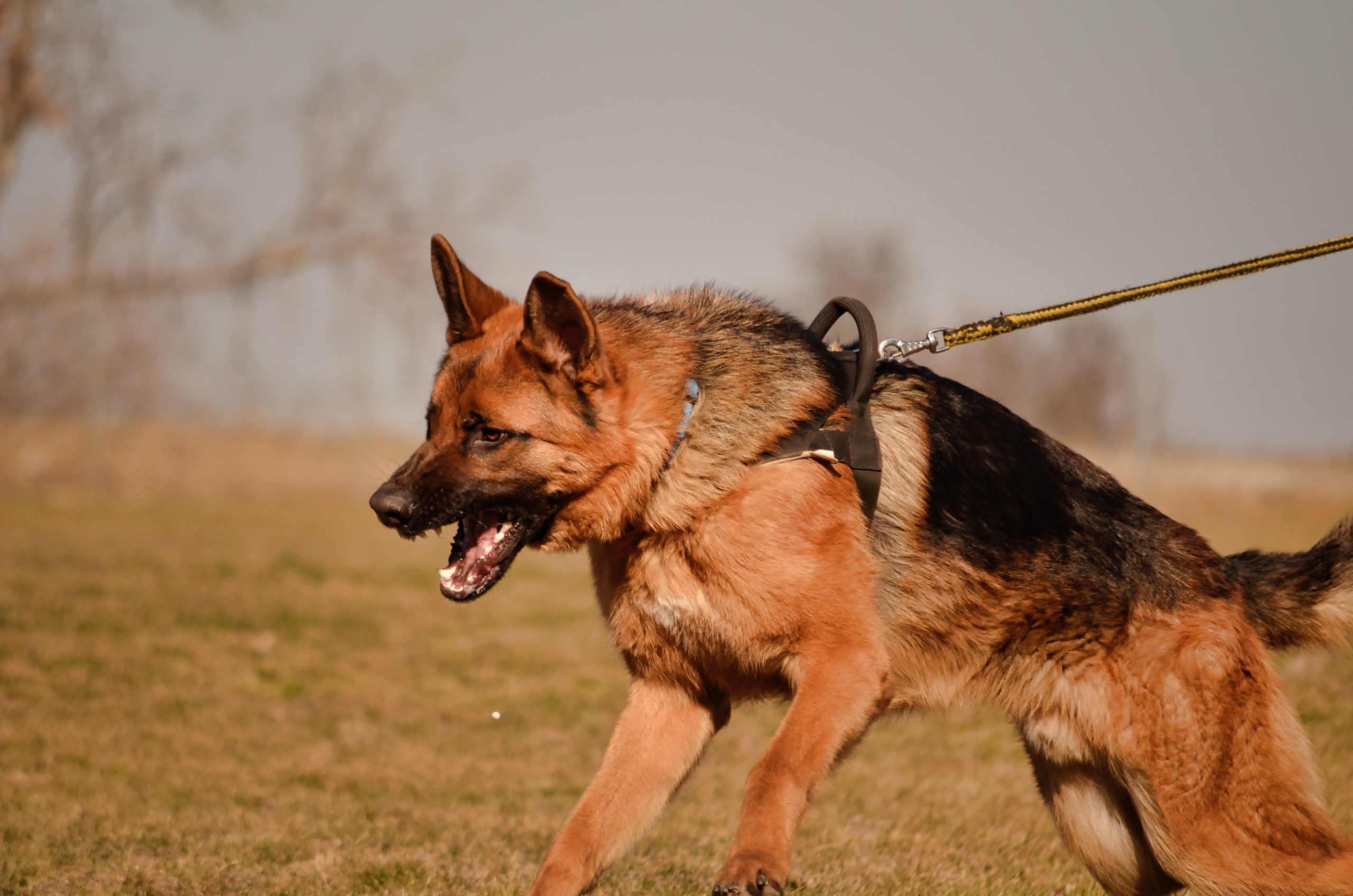 Originated from Germany, German shepherds are one of the most popular medium-large sized dogs. They can be overly cute and protective, as well. This dog breed is mostly used for guarding, as they are very active and cautious. There have been many incidents in the past where german shepherds have turned out to be lifesavers. One may assume German shepherds to be dangerous and aggressive because of their bold personalities, but they actually are very soft and loyal to their owners. This dog breed is a perfect companion for guarding babies as well.

However, not training them in the right way and doing things to irritate them can lead to problems. If you are planning on getting a German shepherd, then you undoubtedly have made a good choice. However, there are some things you must know about their aggression before bringing them home. These factors are stated further in this article.

According to research, you need to remember that aggression comes from fear. No dog has an inbuilt emotion of aggression, but the way you treat them can create an aggressive nature. If you constantly keep yelling on the dog, then it will create a fear factor, and the dog will consider you as someone dangerous and will eventually adopt aggressive behavior.

German shepherds are extremely protective of their owners. It may sound good but can sometimes be a problem when you have surprise guests or strangers visiting you. As per BCSPCA, It is when the dog may start barking and become aggressive towards the innocent guest.

Therefore, you will have to train the dog and make it comfortable with accepting other people but not too comfortable. Try to make it understand your gestures of acceptance and danger. In that way, the dog will be trained to be calm in any situation.

A German shepherd loves his/her human more than anything. Research says that staying away causes stress and anxiety in the dog. It may try to escape, bark excessively, or may show any other abnormal behavior. The best you can do is ensure to give some time regularly to your dog. Make the dog more comfortable with other acquaintances, so it has someone when you are not around.

These dogs are extremely active and need some exercise time daily. A morning walk will probably not be sufficient for them. Yes, they sure are cuddle buddies, but they need their energy activities as well. You cannot just tie your german shepherd on the porch and accept it to be fine. Instead, it will bark on every moving thing constantly and become aggressive.

Your ignorance can be the cause of your german shepherd’s anger. Ignoring the initial little acts of aggression, such as biting or barking, can develop the habit of such acts in the dog.

You will have to train the dog on everything related to barking or biting or any other behavior that can be a concern for aggression. The job of training may be tough in the beginning, but it will eventually pay off. Also, if you don’t train your german shepherd, then it will not only be a problem for you but for everyone around. An aggressive dog can attack anything that occurs dangerous to it.

According to k9aggression, there are three basic types of aggression in german shepherds. They are :

A German shepherd may build a dominating nature towards other individuals. It is very unlikely for this dog breed to feel this way for its owner as they love their owners too much.

However, other things around can be a source to dominate for them. It can be a family member or a worker or even another dog. The reason can be anything, such as the motto of being the only one who gets its owner’s attention.

As already mentioned, German shepherds are extremely loyal and protective of their owners. However, you will have to pay the price if you don’t direct this protection in the right direction.

Territorial aggression forms when the dog thinks that its owner is in danger. So, the dog may bark excessively or show any other aggressive behavior to protect its owner. The dog can even attack if it perceives that the danger is not going away.

You must make the dog comfortable with other members of the family and the people you regularly see. German shepherds are very protective, so you have to be careful with that.

Fear aggression occurs when the dog is scared. A German shepherd may bark, growl, snarl, or may even bite when he/she finds something potentially dangerous and scary.

Constant nagging and yelling can also develop such a nature in the dog. You must not bring something that always scares the dog in front of it in order to avoid such behavior. Doing things that the dog is afraid of can eventually form a permanent aggressive behavior in the dog.

What causes Aggression in German Shepherds?

There can be many reasons for a German shepherd to behave in an aggressive manner. Some of them are :

1.   Anything that triggers fear

Research has shown that fear and anxiety are the most common reasons for any dog to be aggressive. When a dog is constantly brought forward to face something it fears, then it adapts aggression.

The aggression that emerged on the first encounter can become habitual aggression if the fearful situation keeps happening again and again. The dog adapts an aggressive nature to protect itself. Past experiences can also bring out such a nature in a german shepherd.

Here, the interaction refers not only with the owner but the interaction in bigger social terms that involve everything around. When a German shepherd is not familiar with other people, animals, or any other thing in the social context, then it will throw a tantrum when taken to a social place.

Anything like a walk or taking the dog to a vet will become disastrous if the dog isn’t familiar with it. Studies have shown that dogs negatively react to uniforms. So, make sure they are known to the uniforms that come across on a daily basis.

A german shepherd may behave aggressively because of an injury or illness. Injuries or illnesses can cause discomfort for the dog, making it feel annoyed and, therefore, aggressive.

It is better to consult a vet if your dog starts to behave aggressively out of nowhere. Therefore, the injury doesn’t need to be physical; rather, it can actually be the consequence of mental damage because of the dog’s painful past experiences.

You must shower your dog with love and affection. A german shepherd can do anything to make the owner happy. Most of the action a german shepherd performs is basically in accordance with what the owner likes. However, this can change if you don’t show some affection back to your dog. To show affection, start spending an hour near your dog. Moreover, cuddling with the dog is enough. However, if your dog suffers from something like separation anxiety, then you will need to invest more time in it.

Your dog needs the correct training. Everything from potty training to walking is needed for the dog to learn. The training starts when the dog is a puppy, as that is the best learning phase. Your german shepherd will behave in odd ways and will probably not even listen to you if you don’t give him or her the required training.

The dog must be familiar with its environment. It means that it should be comfortable with the people you interact with and even the other animals around. A german shepherd must keep calm during social interactions such as daily morning or evening walks. You have to teach him how to identify if something is dangerous and also teach him gestures that indicate him or her to calm down as everything is fine. Remember that German shepherds are guard dogs and very protective, so you need to handle socialization training at a very early stage.

A German shepherd is a very active dog. Owing to this nature, it is renowned in army services. Because of their hyperactive nature, you can get instant help in cases of threat and protection.

You should give your german shepherd playtime for exercise daily as it will boost their energy and keep them busy. Playtime will also make them happy, decreasing the chances of aggressive behavior.

If you don’t make time or laze around and ignore this exercise time, then it is not only risky for aggression but will also make your dog lazy as well. Research has shown that a German shepherd becomes like its owner over time.

READ :   5 German Shepherd skills & traits you must be aware of

Food can work wonders and persuade anyone. The same formula goes for dogs as well, including the German shepherd breed. As per source, even the smell of the food can work for a German shepherd and make him calm down. Food works excellently in diverting a dog. However, don’t use the food too much for persuasion or else two things may happen :

Instead of adapting a punishing approach, you should rather try the reinforcement or rewarding approach. Rather than scolding or punishing the German shepherd every time he or she exhibits an undesired behavior, try rewarding the dog when he or she behaves according to what is desirable. It will encourage your dog to behave in that manner again and again for receiving the treats for or any other forms of reward. This reward can also be petting and showing affection.

8.   Bring them their favorite toy

Keeping a dog busy is very easy, especially when you have given the dog its favorite toy. It will definitely make your dog more energetic and happy and therefore decrease the level of aggression.

9.   Don’t do everything they want

It is indeed vital for you not to spoil your German shepherd by fulfilling all of its desires. Doing everything a dog wants can develop a dominating nature and the dog. The dog may not understand the meaning of no and become aggressive if you’re not able to do or bring something they want. It is important for you to make a balance and make the dog realize it cannot do anything it wants. Put the dog in situations wherein it fulfills a command before offering it what it wants. In this way, the dog will realize that he or she needs to follow the owner’s instructions.

Teaching tricks is not only fun but can also help in calming german shepherds. This process is somewhat long and can be tough when you are not able to make the dog understand what you want. However, continuous efforts will bring out the desired outcomes. Offer your dog rewards once he or she learns the trick successfully. It will initiate the repetition of this behavior. In this way, your German shepherd will not only be happy and calm, but you will also have something to show off to your friends and other acquaintances.