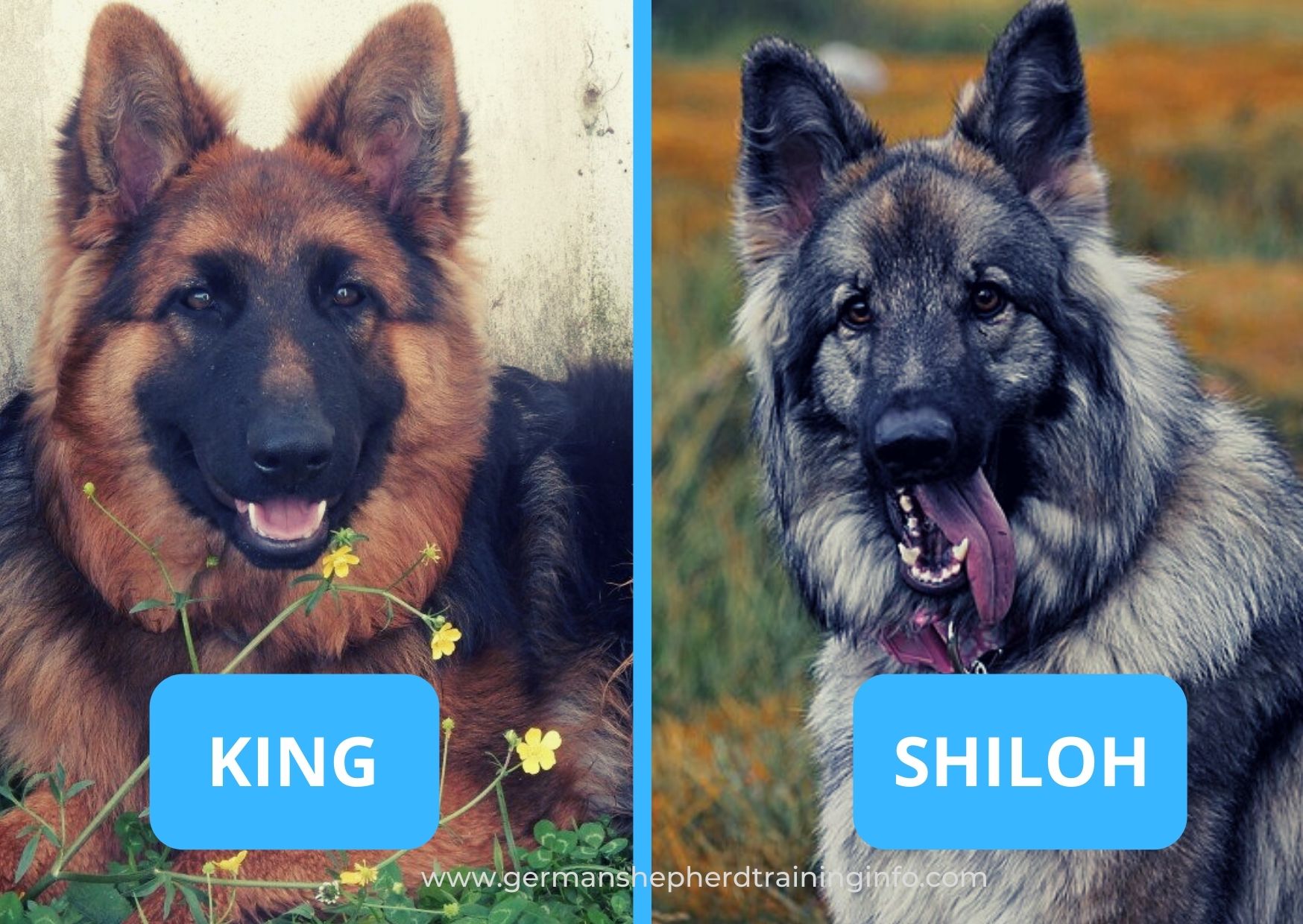 German Shepherd is not just a magnificent dog in itself but is also responsible for many other marvelous offspring breeds. King shepherd and Shiloh shepherd are two such dog breeds that are a result of crossbreeding between a German shepherd and other breeds.

These breeds have been discovered with the purpose of acquiring less aggressive and more family-friendly dog breeds. Over the years they have managed to garner attention towards themselves as well gather affection from a multitude of sources.

As they begin this climb on the charts of canine fandom popularity, here is a low down on their characteristics and differences:

Shiloh shepherds were bred by mating American German shepherds and other breeds, most notably Malamute. The process started in the 1970s with the intention of breeding less aggressive family dogs on the lines of German shepherds.

King Shepherd, on the other hand, was built by mixed-breeding between American line of German shepherds, Shiloh shepherds, and other breeds like the Great Pyrenees dog. They were developed in 1991 by American breeders Shelley Watts Cross and David Turheimer.

Both these breeds are not yet recognized by either AKC or FCI. In 1995, American Rare Breed Association was formed to recognize King Shepherd dogs.

However, with their gaining popularity, we have our fingers crossed.

In comparison, German shepherds who are considered large dogs weigh 49 to 88 pounds and stand at 22 to 26 inches.

Thus, both these dogs fall under the category of Giant dogs. However, King Shepherd is the heavier dog among the two. Their large size compensates for their less aggressive behavior when they are expected to perform the role of a watch dog.

Shiloh shepherds have a more wolf-like appearance. This is due to their triangular ears. King shepherds, on the other hand, have large ears and do not project wolf-like looks.

King shepherds have fluffy, water-resistant coats that usually come in tan-black, solid black, and solid white colors. These dogs are mostly long-haired. Both these dogs shed on a moderate to a high level.

Both Shiloh shepherd and King Shepherd were bred with the additional objective of reducing the chances of Hip Dysplasia that usually plagues their ancestor, our very own German shepherd.

It is true that the possibility of hip dysplasia has significantly reduced in both these species.

However, it is important to remember that both of them are large dogs. The large size of canine comes with its own set of diseases and anomalies. King Shepherds are known to suffer from Elbow and joint Dysplasia as well.

However, overall they are both healthy breeds.

Both these dogs are high-energy dogs (although not energetic as the GSD) and thus their dietary requirements need to be carefully met to keep them at the top of their game.

Both these dogs were bred to tone down the aggression that flares easily in German shepherd dogs. This in turn was meant to breed dogs that were more manageable for families.

However, that is not to say that they cannot turn out to be good watchdogs. In fact, they also are protective of their own families and what they lack in aggression is compensated by their large stature.

Both gel well with other pets, although King shepherds have a slight aversion to cats.

Both these dogs are giant dogs that require large spaces to survive. They may not do well in apartments or houses without backyards.

They also require their daily walk or regimen of exercise. However, they are comparatively less energetic than German shepherds. But this does not imply that you can just hang your boots and get into your cozy bed after a long day at work.

They need to get the excess energy off their system. Or your house and furniture will have to face the brunt of your overzealous dog. This is especially true in the case of King Shepherd, who can turn your lovely home into a cyclone hit ravine if you are too lazy with it, too often.

Both are intelligent dogs. Shiloh shepherd is a slightly calmer dog and thus easier to train than King shepherd. King shepherd dogs have a herding mentality and often herd other house pets and even children.

Both these dogs are excellent family-oriented dogs that can match up to your energy levels if you are not an overtly sports enthusiast. They are loyal and can protect your family with all the ferociousness that they can find in their hearts.

King Shepherds are however the more popular dogs with the ranking of 193 as compared to Shiloh Shepherd’s 347. On this alone, we hand it the crown. However, both of them are giant loving dogs with the size of hearts that matches their large stature.

Speaking of large sizes and statures, find out why German shepherds and other large dogs need a yard.