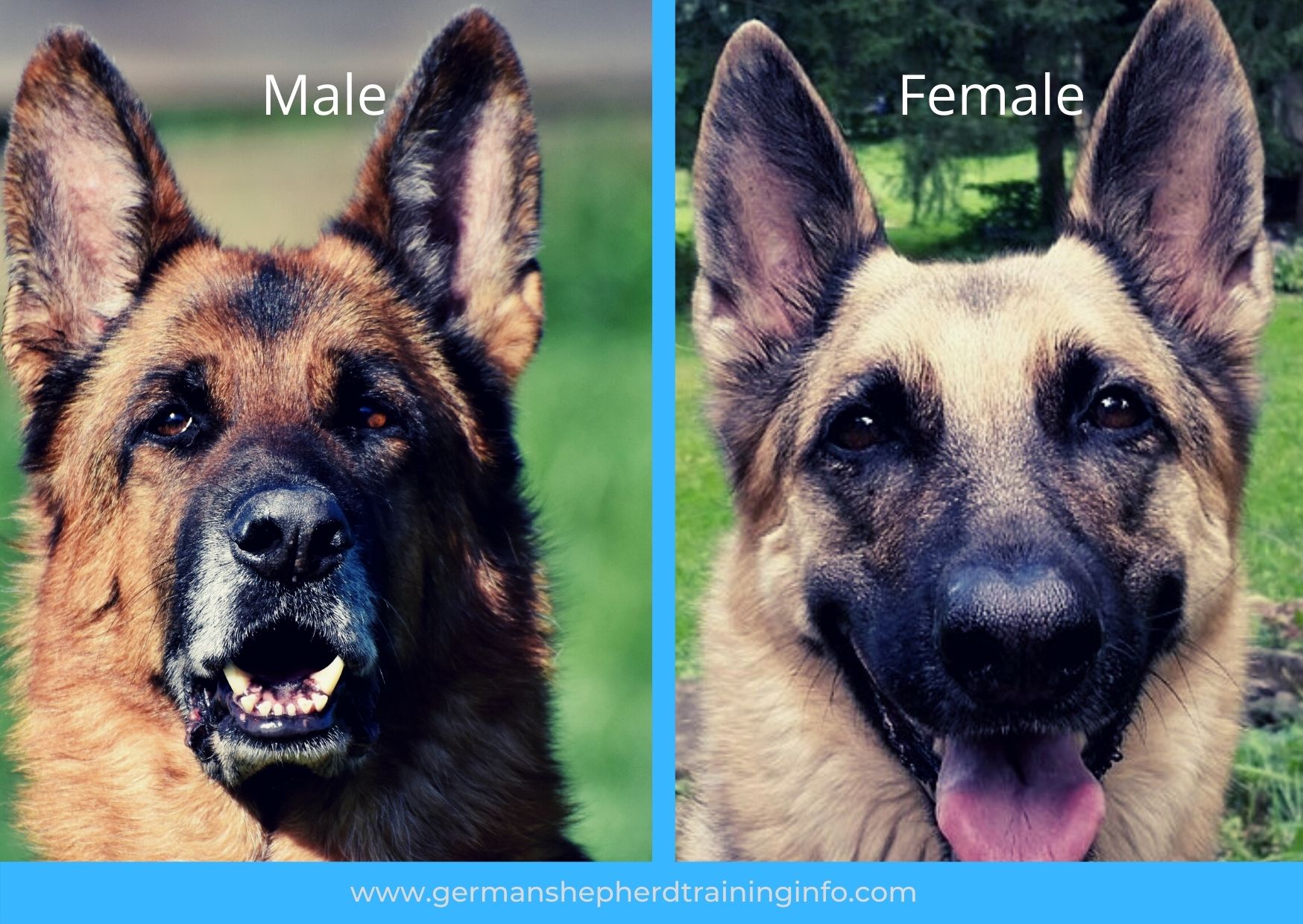 Dogs are man’s best friend and they can be considered apt for several reasons. While we all want dogs, but choosing the correct one that not only matches your demands but also your surrounding is quite daunting. However, to give this dilemma some rest comes in the German shepherds. German shepherds have long been one of the most loved dogs for protecting and guarding homes and loved ones. But there always lies a certain question, whether to get a male or a female German shepherd?

Although belonging to the same group, based on their genders, the German shepherds do exhibit certain physiological and behavioral changes that one must address to prior purchasing. From the difference in their activities to social interactions, there are a lot of differences between these two genders. In this article, we are going to compare the German shepherds based on their gender and thus the related differences that they can create.

Height: The height of male German shepherds ranges from 24-26 inches while that of females lies within a range of 22-24 inches.

Weight: The weight of males ranges from 29-40 kgs and that of females is within a range of 23-32 kgs, and thus a tad bit lighter.

Size: In the case of size, males are much more sturdy and larger than females. They also possess a larger head size and broader bodies that can prove to be quite intimidating. As opposed, females are smaller and lighter than males, and thus their size seems to be more feasible for apartments.

Male German shepherds can be proving to be quite daunting during training sessions, as they are bigger and also possess massive attitudes and egos. However, if trained correctly, males are much handier than females, and thus are often the first choice as police dogs. Based on their alpha nature, males German shepherds are very good at perceiving and apprehending criminals.

However, owning a female German shepherd has its perks. To start with, they behave maturely and are thus easier to train and stays much more focused. Moreover, females being lighter and smaller are much faster and agile and have strong sensitivities. In this case, it must also be noted that during heat periods, females remain distracted during training, and also in their presence, males get distracted too.

Well, just like any other male dogs are quite boisterous and dominant, proud, and possessive as compared to their female counterparts. Male German shepherds are very much possessive for their person and thus must be kept in check from an early age.

On the contrary, females show less possessiveness and offer a comparatively calming nature, and goes well with their handlers. They get along with other people quite well, however, this can essentially emanate increased degrees of dependency and clinginess.

READ :   A Quick Guide to Heat Tolerance in German Shepherds

Herewith, it must also be noted that both genders barks frequently upon someone unknown arriving at alarm the member, and although it can be beneficial for the owner, it is certainly irritable for neighbors. Thus, both these genders must receive proper social interactions from an early age.

Under temperamental context, territoriality comes foremost in decision making. Male German shepherds are very territorial and tend to urinate at every place to mark their territory and authority. On the opposite side, females are must sweeter, gentler, and friendlier, and very well suitable as a family pet. Moreover, females are much more tolerant towards outsiders.

However, it must be noted that a German shepherd’s temperament completely relies on their social interaction skill that must be initiated and triggered from an early age. No matter whether you are choosing a male or a female German shepherd, social interaction from childhood days is your key to ensure safe interactions with house guests. Contextually, it must be noted that in the case of females, the production of the litter of puppies and makes them territorial and protective.

As stated earlier, male German shepherds are much more territorial and authoritative and thus much more aggressive in saving their loved ones and home. Females are comparatively friendlier and gentler thus exhibit less aggressiveness. Although males perform better as guard dogs but require a lot of training.

Moreover, family and neighboring conditions must be taken into consideration before selecting the gender of your German shepherds. As states, females are gentler and friendlier are well-suited for family situations, and males as actual guards or police dogs. However, it is important to mention that training from childhood is very much essential for both genders. They must receive the correct degree of socialization such that their carnal primal instincts can be controlled in the long run.

Bred originally to herd flocks, German shepherds possess a double coating of fur that protects them from adverse weather conditions. They come in various colors and patterns, from black, brown, white, and so on.

However, German shepherds shed very much, and thus brushing your dog 2 to 3 times every week is essential to keep them hygienic. Also, as a result of their heavy coating, bathing regularly is not an option and must be washed under running water if dogs need it. Thus, in both the genders, maintenance and grooming cost is pretty much high.

No matter how much it is discussed, it is quite hard to select the correct gender. While male German shepherds are very much effective as guards and protective dogs, females although having reduced possessiveness show sheer levels of guarding acts and are much gentler and friendlier. So, it doesn’t matter whether you go for male or female German shepherds, both will equally guard and protect your house and will prove to be adorable.