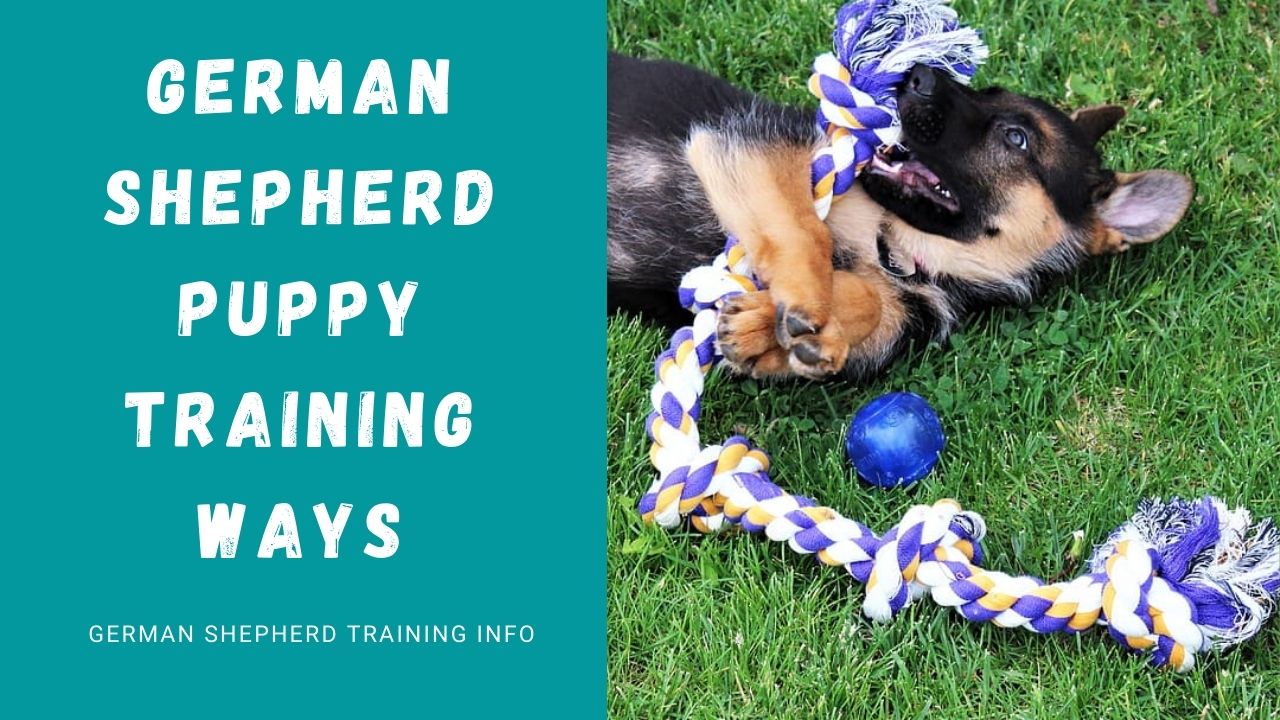 A work well started is a work done half well. Training a German shepherd puppy from an early stage is an apt illustration of this effect. German shepherds are one of the most intelligent dogs around and it is usually an absolute delight to teach them as they have a fabulous learning curve.

And if you are lucky enough to catch them young, their early formative years can turn out to be an exemplary lifting pad to launch them into a lifetime of excellence.

1. Consistency is the key:

Although the responsibility to nurture your German shepherd puppy starts the minute it enters your home, standardized training for them should be started as they turn eight to twelve months old.

Consistency is the most important component of your training process. A German shepherd pup, like a newborn baby, is unable to distinguish between acceptable and unacceptable behavior.

Also, dogs, in general, have a short-term memory of hardly more than two minutes. However, they are blessed with a good associative memory. This allows them to form associations between the command given, the behavior reciprocation, and the situational scenario.

In order for them to establish correct correlations between a situation and the consequent reaction, it has to be consistent. Hence, if you give a verbal command to the puppy to not jump on the couch, it has to be repeated every time such a situation arises.

If you stop him once from doing it because it is an expensive couch and not the next time, when you could not care less about the couch, it is going to get confused. After all, your German shepherd pup cannot read price tags.

2. Introduce him to the usual:

A German shepherd pup is just like a shy newcomer in a class who needs to be dealt an extra push to break in with the surroundings.

Try to make the pup comfortable with people and things that will eventually be a part of its daily routine. Introduce the people around you with a smile and hug so the dog understands that they mean no harm and cozies up to them.

Start using a coat brush on it so that it does not consider its grooming kit as a threat. Have a futuristic vision in mind as you try to modulate its behavior. For example, you may find it cute when it tries to nibble your hand today, but when it grows a real dentition, trust us; you are going to regret it.

3. Work on your body language and stay firm:

Your body languages and facial expressions are as important as your verbal commands to help the puppy understand if you are happy or upset about the given situation.

If you find his behavior unacceptable, let it know that you are upset with your body language. However, never yell at your puppy or physically punish it. This may make him nervous or frightened and damage your emotional bond irreparably.

Also, it’s easier said than done, but do not melt if he tries to soften you with its soft, gooey eye gaze. Remember, you are doing it all for his good only.

Positive reinforcement is an important part of behavioral training. If you notice your German shepherd pup displaying good behavior, reward him immediately.

Also, make sure there is no significant time lapse between its positive behavior and the reward received. This will ensure that he is aware of what he is being rewarded for.

The reward can be in form of a verbal expression or hug, a favorite treat, or a chewy toy to play with. You can keep a few treats handy around the house for this purpose.

A time-out is a way to call out your puppy for bad behavior by removing him from the immediate surroundings that are causing it. Then take him to another room or confined area and leave him there. If he calms down or starts showing positive behavior, you can remove him from that area after a couple of minutes.

Usually leaving him alone in the bathroom for a few minutes works. However, do not initiate time-outs in outside, open areas as the puppy may mistake it as a reward for appropriate behavior.

Sometimes the dog may cause an unnecessary ruckus by barking just to garner your attention. Do not pay heed to and completely ignore the dog, if you feel that he is acting with the sole motive of gaining attention.

READ :   German Shepherd Signs of Affection- How to tell if your GSD loves you?

Ideally, also try to tackle the root cause of the issue. It is important to pay an adequate amount of attention to your dog so that it feels desired. If your dog is suffering from severe separation anxiety, you may need to consult a vet.

It is also important to ensure that your German shepherd pup gets an adequate amount of exercise so that its raw energy is not channelized into destructive and attention-seeking ways.

The initial months of the German shepherd pup training set up the tone for its future course. It is thus important to put our best foot forward in this preliminary phase itself.