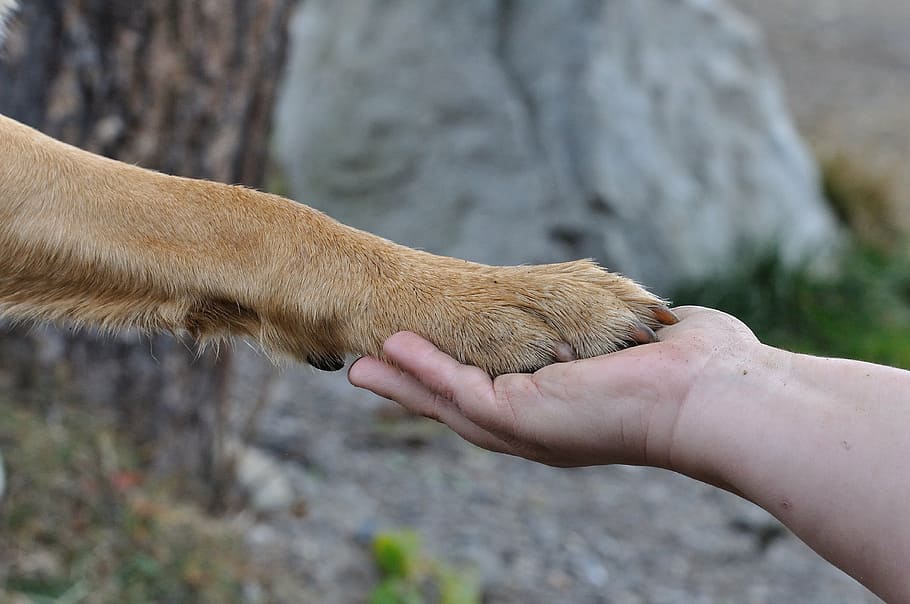 It is true that we humans and dogs do not speak the same language. But dogs, just like babies try to give us signals through some peculiar and unusual habits and signs. Just like a baby starts crying when they’re hungry or sleepy, your dog would too give out certain signs when they are feeling something.

So, if you own a German Shepherd, have you ever noticed that your dog quite often puts a paw on you? Have you ever wondered why it does something like this? The truth is, a dog is just like us humans. Whenever they wish to give out signals or wish to communicate something, they do something peculiar. Now, this something often puts us in a puddle where we start to think about what the dog is trying to communicate.

So, if you too are in a similar quandary, then, let’s decode what this sign means.

If your German Shepherd is putting its paw on you, it could mean anything! From feeling hungry to demanding attention to declaring dominance. Putting a paw on the owner could mean a ton of things.

It is extremely important for all dog parents to understand that dogs are not capable of communicating just like we humans do. So it becomes important to read out signs and signals. One of them is when your German Shepherd Dog puts his paw on you.

For your knowledge, this is a super common behavior pattern of a German Shepherd. But if you are trying to interpret answers for it, let us tell you, they could be many!

Why Does My German Shepherd Put His Paw On Me? Various Reasons

Each of the different behavior patterns of a German Shepherd will come with its set of clues, and putting a paw on the dog parent is no different. If your German Shepherd puts a paw on you, it could mean any of these things –

Your German Shepherd Is Hungry

It Needs Your Attention

Dog parents love their fur babies, and that is why they need so much attention. However, there could be times where they could be feeling very attention deprived, and these are the times when they express this deprivation by putting a paw on you.

If this is the reason, try and give them more attention during the day, and figure out if this really is the reason for this behavioral pattern.

Although German Shepherds are robust creatures who do not get scared or insecure easily. However, the feeling of insecurity might sink in. Putting a paw on you might give it comfort, and that could be the reason why it is doing so. This could happen when they are ill, or when they are sensing a tense situation.

READ :   5 German Shepherd skills & traits you must be aware of

It Want Physical Activity Or Exercise

German Shepherds need a lot of exercise throughout the day. If they are not getting enough exercise, or if they are demanding more, their body can give out signals which can come in the form of this. Therefore, always make sure to give your GSD ample exercise during the day.

You’re The Boss or They’re the Boss

German Shepherd are generally extremely muscular and independent dogs. However, they love their owners and their families way too much. Hence, they might show submission by putting a paw on the parent.

However, this could also mean quite the opposite. This might also be their way of showing dominance to their family members.

Should You Allow It?

German Shepherds are intelligent dogs. While the occasional pawing could be an aw moment, but dog parents must watch out before this becomes an annoying habit. Putting an end to this tough habit can be quite tricky. So it is always better to control these behavior patterns well in advance.

This is for the simple reason that whenever your German Shepherd is doing something like this, it is asking for immediate attention. It could be for anything- food, water, attention, or even feeling discomfort. If you begin to cater to all their needs as soon as they ask for it, it becomes behavior and a practice, and you definitely would not want that.

Hence, stopping the pawing and rectifying this behavior becomes a necessity if you wish to keep bad habits far away from your German Shepherd.

READ :   What types of yogurt can dogs eat?

We all simply adore it when our dogs put their paws on us. This could be their way of signaling something that they have been trying to communicate. Right from wanting food, to attention to even indicating a physical discomfort, all pet parents should try to comprehend this behavior.

It is best to notice it time and again, and understand what the German Shepherd is trying to communicate. However, you should also make sure that this never becomes a regular activity, as it can become a situation of crisis for you.

4 thoughts on “Why Does My German Shepherd Put Its Paw On Me?”